MOHAVE COUNTY, Ariz. - Elected leaders in the last Arizona county to certify its results from the Nov. 3 election signed off on their tally Nov. 23, setting the stage for state leaders to formalize Democratic presidential candidate Joe Biden’s historic win in the Grand Canyon State.

The five-member Mohave County Board of Supervisors unanimously approved the county's election results after balking last week because of lawsuits being pursued by backers of President Donald Trump in Phoenix. Judges in Maricopa County rejected those efforts, although appeals and additional legal efforts are possible.

Supervisor Ron Gould said he had no concerns about the election tally in the staunchly Republican northwestern Arizona county where 75% of voters backed Trump.

“I have grave concerns about the election in our own state and across the nation,” Gould said. “I think its really time that we take a hard look at ballot security and our voting process, because I think that nationwide people have lost faith in this process because of this election.

Gould had joined other supervisors in delaying the official canvass last week, saying he wanted the lawsuits to play out. 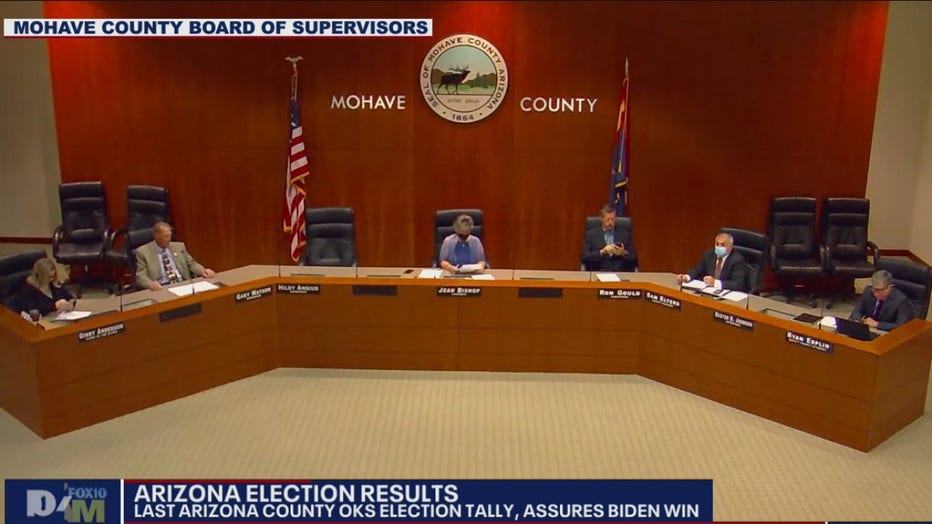 With a unanimous vote by the Mohave County Board of Supervisors, the election results were approved on Nov. 23, 2020.

The lawsuits targeted Maricopa County's vote tally, alleging that some voters' ballots weren't counted, and there were questions about the accuracy of the count. The GOP-dominated Maricopa County Board of Supervisors approved its canvass last Friday after the final lawsuit was dismissed.

Board members heard extensive reports from Maricopa County elections officials who said the vote count was correct and noted that all tests and hand-count reviews showed the electronic ballot count was 100% accurate. Those tests and reviews are done with help from Democrats and Republicans.

Elections challenges brought by the Trump campaign or his backers in key battleground states have largely been unsuccessful as Trump continues to allege voter fraud while refusing to concede.

There is no evidence of widespread fraud in the 2020 election. In fact, election officials from both political parties have stated publicly that the election went well and international observers confirmed there were no serious irregularities.

Biden won Arizona after Democrats pinned their hopes on Arizona’s changing demographics and swing voters who split their tickets two years ago to elect a Republican governor and send a Democrat to the U.S. Senate.

The state plans to do its statewide election canvass on Nov. 30.

Continuing coverage of the 2020 election: