PHOENIX - Democratic Arizona Sen. Kyrsten Sinema faced more defections on Oct. 21 from the broad base of support she built to win her seat in 2018 when five members of her veterans advisory council resigned over her opposition to parts of President Joe Biden's infrastructure plan and refusal to ditch the Senate filibuster.

The resignations come as progressive groups are ratcheting up their pressure on the first-term moderate, who along with West Virginia Sen. Joe Manchin is seen as holding back progress as Biden sharply scales back his once-$3.5 trillion plan to win their support.

Democrats need their support to push the legislation through the 50-50 Senate. That would let Vice President Kamala Harris supply the tie-breaking vote.

The veterans are also upset with Sinema for refusing to back changes to the filibuster, saying that is preventing action on voting rights, immigration and other key Democratic priorities, according to a scathing letter they released publicly Thursday. And they pointed to her reported opposition to allowing Medicare to negotiate drug prices to be included in Biden's infrastructure package, saying that goes against a key campaign promise she made to rein in drug prices.

"These are not the actions of a maverick," the five veterans wrote. "We should have realized this once you showed your true character when refusing to vote to establish a commission to investigate the January 6th riot at the U.S. Capitol." 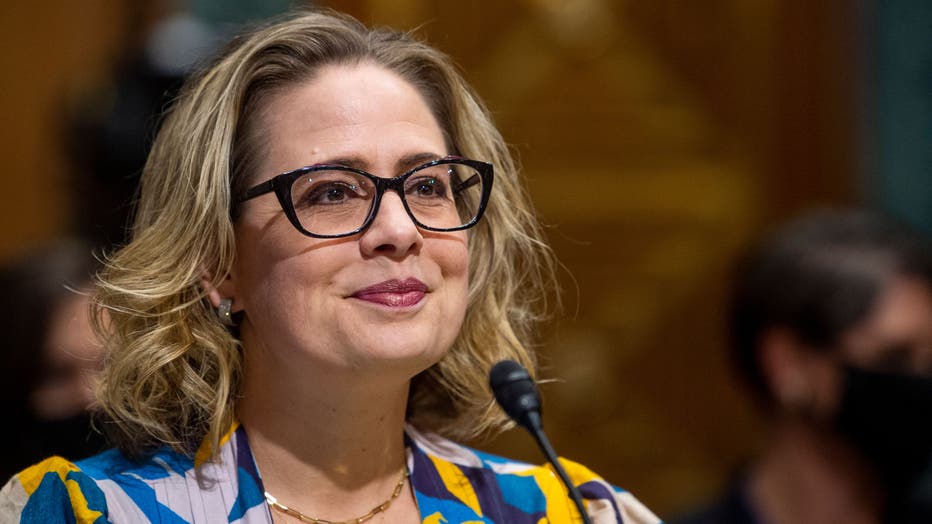 US Senator Kyrsten Sinema of Arizona, speaks during the Senate Finance Committee hearing on the nomination of Chris Magnus to be the next US Customs and Border Protection Commissioner, on Capitol Hill in Washington, DC, October 19, 2021. (File photo

Veterans were a key constituency that Sinema wooed during her 2018 campaign to replace Sen. Jeff Flake, who declined to seek another term after his criticism of then-President Donald Trump made it impossible for him to survive a Republican primary. Sinema defeated then-Rep. Martha McSally — the first Democrat to win a Arizona Senate seat in more than two decades — and has since embraced the "maverick" label worn by John McCain, the Arizona senator and 2008 Republican presidential nominee who died months before she won her Senate seat.

Sinema released a statement Thursday thanking the veterans for their contributions to her work to ensure vets get the benefits they have earned.

"While it is unfortunate that apparent disagreement on separate policy issues has led to this decision, I thank them for their service and will continue working every day to deliver for Arizona’s veterans who have sacrificed so much to keep us safe and secure," she said in a statement.

Sinema has been tight-lipped as to which parts of Biden's sweeping plan she supports, with her spokespeople consistently saying she is negotiating directly with the president and congressional leaders and not in the press. But her opposition to tax increases on corporations and wealthy individuals earning more than $400,000 a year prompted Biden to drop them from the proposal on Oct. 19.

Biden's ambitious $3.5 trillion social services and climate change package is also being trimmed back, likely to just $2 trillion over 10 years, in part to mollify Sinema and Manchin. Sinema has said there is no way she would support that higher level of spending.

She said in an interview with The Arizona Republic newspaper last month that she wants the package to not fuel inflation. But she seldom speaks to reporters and her views on many specific components of the measure are unclear.

The veterans group resignations were announced by Common Defense, a progressive veterans group that also released an critical of Sinema that featured one of the veterans, U.S. Air Force retiree Sylvia González Adersh.

Also Thursday, Arizona progressive groups held the latest in a series of demonstrations designed to increase pressure on Sinema. The groups want Sinema to end the filibuster so Democrats can enact pro-union legislation, immigration reform and voting rights legislation that Republicans are now blocking.

Arizona now has two Democratic senators, but the reality on the ground is that their status remains up in the air as voters in the once-heavily Republican could easily change that in the next four years. Democratic Sen. Mark Kelly, elected last year to finish McCain's term, faces reelection in 2022 and Sinema must face voters again in 2024.

That has led Sinema to embrace moderate positions. She won election by building a centrist base of the state's independent voters while maintaining support from progressive and moderate Democrats.

She has said unequivocally that she will not vote to end the Senate rule that requires 60 votes to advance legislation, arguing that doing so would allow passage of legislation that would be swept away the next time control of Congress swings to Republicans.

In a June op-ed in the Washington Post, she also noted that Democrats used the filibuster last year to block legislation they opposed.

But her opposition to parts of Biden's plan and refusal to sweep away the filibuster imperils her from the left.

After attending the latest rally Thursday held by angry progressives, one Democrat said they will keep the pressure up - even if it means a Republican wins in 2024. Now, he said, progressive Democrats are upset at Sinema for what she is failing to do.

"The way we look at it as far as progressives is, we already have a Republican in office, so what are we going to lose," said Rich Andrade, a state House member and union member. "Either you support us and the chances of winning the next race are stronger, or completely blow your chance of winning."