STOCKHOLM (AP) - The pomp and ceremony of the Nobel prize ceremonies have been reined in this year amid measures to slow the spread of the coronavirus. There will be no glitzy banquet honoring winners in Stockholm or Oslo as the global pandemic curtails the usual celebrations.

Instead, their achievements will be recognized and rewarded at low-key ceremonies where they live and work in Europe and the United States, with the first one Monday in Berlin.

Twelve laureates were named in 2020. A Nobel prize comes with a 10-milion krona ($1.1 million) cash award — to be shared in some cases — diplomas and gold medals. Traditionally, the lavish Nobel ceremonies are held Dec. 10, the anniversary of the death of prize founder Alfred Nobel, at an ornate city hall in Stockholm for all but the Peace Prize that is held in Oslo in neighboring Norway. Nobel wanted it that way, for reasons that he kept to himself.

The 2020 Nobel prizes were announced in October. The prize for physiology and medicine was awarded to Harvey J. Alter, Michael Houghton and Charles M. Rice “for the discovery of Hepatitis C virus.” The prize for physics honored Roger Penrose, Reinhard Genzel and Andrea Ghez for their breakthroughs in understanding black holes, while the chemistry prize went to Emanuelle Charpentier and Jennifer A. Doudna for a powerful gene-editing tool.

The literature prize was awarded to American poet Louise Glück “for her unmistakable poetic voice that with austere beauty makes individual existence universal.” The World Food Program won the peace prize for efforts to combat hunger.

But the pandemic means that the award ceremonies have been dialed down this year. They start in Berlin on Monday where Charpentier of France will receive her medal and diploma from the Swedish ambassador. 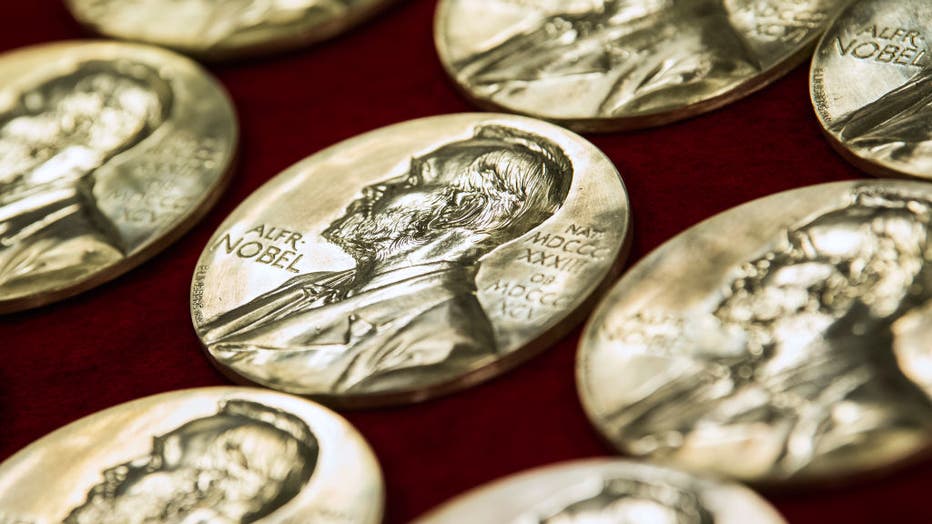 The Nobel Prize awards ceremonies will take place on Dec. 10, the anniversary of the death of the founder of the prize, Swedish industrialist and philanthropist Alfred Nobel. (Photo by JONATHAN NACKSTRAND/AFP via Getty Images)

Throughout the week, the others will get their medals and diplomas. Penrose, a British scientist, will be awarded his in London by Sweden’s envoy to the United Kingdom while German scientist Genzel will be honored at the Bavarian State Chancellery in Munich, in southern Germany.

Moving across the Atlantic, Alter will get his award at the National Institutes of Health in Washington D.C. from Sweden's ambassador to the United States. The Scandinavian country's Consul General in New York, will hand it over to Rice.

On Wednesday, Sweden's Honorary Consul in San Francisco, Calif., will present them to Ghez, Doudna, and Paul R. Milgrom and Robert B. Wilson, who won the Nobel prize for economics for helping make auctions run more efficiently.

On Friday, the Peace Prize will be awarded virtually with a presentation in Oslo by the head of the Norwegian Nobel Committee and a ceremonial presentation and an acceptance speech in Rome, Italy, by David Beasley, head of the United Nations World Food Program.

In Stockholm on the same day, a webcast ceremony will be held and King Carl XVI Gustaf is expected to hold a speech.

It has not been announced yet when Glück and Houghton will receive their diploma and medal in their respective homes.