Kids between the ages of 5 and 11 are now eligible to get the Pfizer-BioNTech COVID-19 vaccine.

Pfizer-BioNTech on Tuesday asked U.S. regulators for emergency authorization for a two-dose regimen of its COVID-19 vaccine for children 6 months to 5 years old, aiming to clear the way for the shots as soon as late February.

Meanwhile, the company is still awaiting data on a three-dose course.

Early Pfizer data has shown the vaccine is safe and produces an immune response. For the youngest age group, the shots are administered at one-tenth the strength of the adult shot.

Here’s everything to know about Pfizer’s COVID-19 vaccine for kids under 5:

Two doses versus three of Pfizer's vaccine for children under 5

Pfizer announced in mid-December that the two-dose shot was less effective at preventing COVID-19 in kids ages 2-5.

Researchers analyzed a subset of youngsters in the study a month after their second dose to see if the little kids developed levels of virus-fighting antibodies that were similar to teens and young adults who get the regular shots. The very low-dose shots appeared to work in youngsters under age 2, who produced similar antibody levels. But the immune response in 2 to 4-year-olds was lower than the study required.

Rather than trying a higher-dose shot for the preschoolers, regulators encouraged Pfizer-BioNTech to add a third dose to the study on the belief that another dose would boost the vaccine's effectiveness much like booster doses do in adults.

But in the meantime, the U.S. Food and Drug Administration (FDA) pushed the company to submit its application based on the two-dose data for potential approval in February, and then to return for additional authorization once it has the data from the third dose study. Data from the third dose study isn’t expected until March, the Associated Press reported, citing a person familiar with the matter.

The person said the decreased effectiveness of the two-dose vaccine was not unexpected given the emergence of the highly transmissible omicron variant of COVID-19.

Allowing young kids to be vaccinated with a two-dose shot earlier would ultimately accelerate when they could get the expected stronger protection from a third dose. 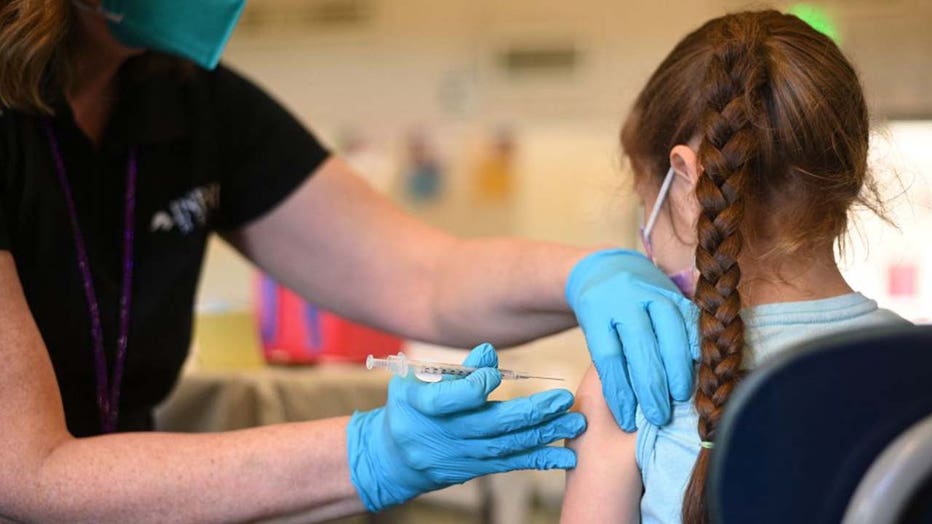 FILE - A nurse administers a pediatric dose of the COVID-19 vaccine to a girl.

When could young children potentially get the Pfizer COVID-19 vaccine?

The two-step authorization process could mean that children 6 months to 5 years old — the last remaining age group without approval — could be vaccinated as soon as late February, which would be more than a month earlier than previous estimates, according to the Associated Press.

First, both the FDA and the Centers for Disease Control and Prevention (CDC) need to greenlight the shots.

How far apart are Pfizer’s shots administered for young children?

Pfizer's primary two-dose series is administered three weeks apart. The third dose for young kids is being studied for administration at least two months after the second dose.

Children and the omicron variant of the coronavirus

Young children are far less likely than adults to develop serious complications or to die from COVID-19, but incidences of illness among the age group have risen amid the nationwide spike in cases from the omicron variant.

Most cases and deaths occur among older people, especially those who are unvaccinated.

Speeding the authorization of pediatric vaccines against COVID-19 has been a priority for more than a year of the Biden administration, which believes they are critical to reopening and keeping open schools and daycare centers. The White House also believes authorization will help free up parents occupied by childcare responsibilities to return to the workforce.

A kid-sized version of Pfizer’s vaccine already is available for 5 to 11-year-olds, one that’s a third of the dose given to everyone else 12 and older.