PHOENIX - An Afghan man is on the run after being targeted by the Taliban and his friend who lives in Phoenix says he and his family are being threatened because of his connection to the U.S. Army.

Mindy Weller says her friend has been on the run for two weeks, hiking nine hours straight through Afghanistan and she's trying her best to get him help.

"It's nervewracking, you know? Am I gonna hear from him today? Is he gonna send me a message?" she asked herself.

Weller is doing her best to keep in touch with her friend who will remain unidentified for safety purposes.

"Honestly, I cry every day. I pray every day that he reaches out 'cause we have a limited window for him to contact me and it's been pretty consistent so I pray that I don't get word that he is dead," she said.

She says her friend, an Afghan national, served with the U.S. Army Corps of Engineers and also worked as an interpreter for the Afghan National Army on behalf of the U.S.

She says he's been threatened and targeted because of the help he gave to the U.S. Army.

Since he went into hiding, she says, they went after his family.

"They've gone to his house at least twice that I know of. The first time they went looking for him, basically to execute him. His family had hidden him and his wife and friends had hidden him, and when they went, they actually kicked down the door and when he wasn't there they assaulted his wife and his little son," Weller said. 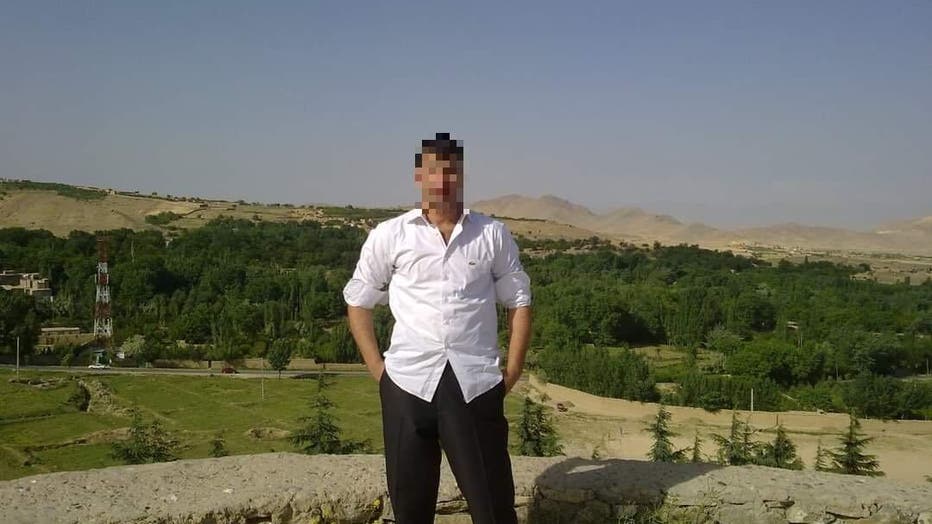 Afghan national working to be saved by a friend in Phoenix, Arizona. His identity is protected for safety reasons

She's been working with refugee officials and other government agencies to try and get her friend out of the country but has been told he first needs to acquire a visa, which costs money.

They've also been advised to hire a lawyer which will cost them $15,000.

"So I mean, it's just roadblock after roadblock, but we're still trying, still doing paperwork," she said.

While she may be thousands of miles away, Weller says that just keeping in touch with her friend helps him to carry on, knowing that there's someone who cares.

"That way he knows he is not being forgotten about because that's his biggest thing is that he feels that he is being left behind," she said.

At least 50,000 Afghans are expected to be admitted into the United States following the fall of Kabul as part of an "enduring commitment" to help people who aided the American war effort and others who are particularly vulnerable under Taliban rule, the secretary of homeland security said Friday.

Tens of thousands of Afghans have already made it through security vetting and arrived in the U.S. to begin the process of resettlement. Exactly how many more will come and how long it will take remain open questions, DHS Secretary Alejandro Mayorkas said as he outlined the effort.

"Our commitment is an enduring one," he told reporters. "This is not just a matter of the next several weeks. We will not rest until we have accomplished the ultimate goal."

Mayorkas and other Biden administration officials are providing the most detailed look to date at what began as a frantic and chaotic effort to evacuate U.S. citizens, permanent residents and Afghans before the Aug. 30 withdrawal of American troops and the end of the country's longest war.

Donate to the GoFundMe to help Weller's friend by clicking here.

Afghan hiding from Taliban speaks out after helping U.S. military

Weller's friend asks to be called Muhammad, which is not his real name, to protect his identity.

"Every day, I change places and I am just looking for some help, some assistance," he said in an interview on Sept. 5.

Muhammad is on the run in the mountains of Afghanistan, trying to escape the Taliban who he says have been after him for two weeks.

He explains how the Taliban is impacting his home life – even as he's on the run.

"Taliban came to our village … burned up our homes, my kids are scared and my wife is scared too," he said.

His wife is nine months pregnant and he says the Taliban attacked his wife and his son while looking for him. He was forced to leave because with him around they were in even more danger.

"Difficult time. I can't reach my wife to help out and I can't do anything right now," he said. "So they will find me and kill me and there is no one to help my family after me
so that is why I am trying to get out of here."

Muhammad says he needs a visa to get out of the country, but he has no money as the Taliban stole all that he had.

"I hope that people of U.S. will help us. We help them, we support them when they were here … and of course, they will support me, I trust them," Muhammad said.