A Queen Creek family is now in the process of rebuilding after their home was destroyed in back-to-back monsoons.

QUEEN CREEK, Ariz. - The wreckage of the weekend's back-to-back monsoons is going to be felt for a while, especially for the Rasmussen family whose house is completely destroyed.

"It was like a freighter came through full speed," said Dakota Rasmussen, describing how Friday night's monsoon shredded his family home while they were watching TV.

"The wind started hitting the house, so one of the kids came in the bedroom and he said, ‘I’m scared. Come sit with us,'" he recalled. As he sat with his two 10-year-old sons, the sky opened up in the room. 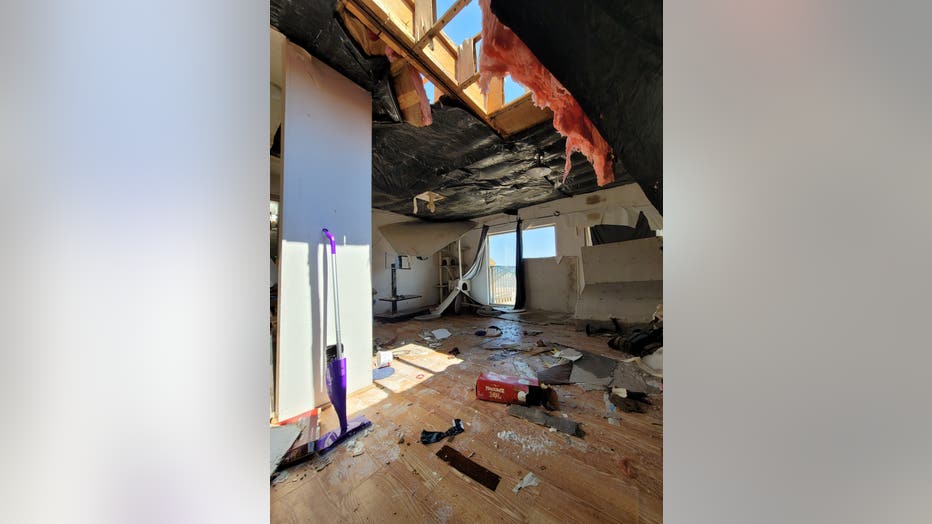 A home in Queen Creek had its roof ripped off during a monsoon. Photo courtesy of Dakota Rasmussen

"It went completely quiet and then all of a sudden it hit so hard it started peeling up and as it peeled, I grabbed the kids got them into the bedroom," he said.

The family sought shelter in one of the two areas of the home that didn't lose its roofing. He huddled with his family while the storm picked up speed.

The rest of the house wouldn’t survive the downpour of the monsoon. Then it was compounded by Saturday’s storm, everything that was left was now soaked under a ceilingless home.

Looking at the home from outside, you can see his roof split in two. "It crumpled it like a ball," Rasmussen said.

Everyone’s OK, but now the real work begins to rebuild the family's home.

"It's something that you once lived in and ate dinner and played games with the kids. Now, there’s nothing. You got to start over and rebuild where you can," he said.

Was Rasmussen scared during the monsoon? He said he was too focused on saving his kids and wife to even think about that.

Homes nearby didn't have nearly the amount of damage his home had.

A GoFundMe was started to help the Rasmussen family with expenses needed to fix their home.