Monsoon storms sweep Arizona for the second night in a row

High winds knocked out power to thousands of homes across the Valley Saturday night, leaving behind even more damage than before. FOX 10's Steve Nielsen was in Chandler with the latest.

PHOENIX - A blowing dust advisory and severe thunderstorm warning were issued for a major part of Arizona on Saturday, July 10, says the National Weather Service (NWS).

For the second night in a row, monsoon storms swept across the Valley, causing major power outages and damage from high winds.

The southeast part of the Valley were one of the areas hit the hardest, especially in and around Queen Creek. Downed trees could be seen at practically every house, and windows were broken out of cars and homes.

Several people even reported seeing their backyard trampolines take off and fly away.

59 mile-per-hour winds were recorded in the East Valley, and there were 110,000 recorded lightning strikes from Saturday's storm, according to the National Weather Service.

Thousands of residents across the Phoenix metro area were affected by power outages, but as of Sunday morning, most power has been restored to homes.

The blowing dust advisory was in effect from 5 p.m. to 11 p.m. Saturday for all areas between Tucson and Phoenix. For most areas of Arizona, the thunderstorm warning was in effect through midnight Saturday.

Just the night before, a dust storm advisory was in effect for several areas in Arizona. The dust storm also brought monsoon thunderstorms to the southeast region of the Valley with wind speeds up to 70 mph.

Several regions of Arizona are also under an excessive heat warning through the weekend, NWS says, adding that a major portion of the West Coast, including California, will be feeling extremely warm.

Click here for a live map of the latest outage information.

Back-to-back monsoons in most parts of Arizona knocked out power to thousands of residents over the weekend and by Sunday night, crews are still working to restore power to some neighborhoods

Aftermath of thunderstorm brought on by monsoon season 2021

Many were left with damage as severe weather tore up their homes on Saturday night. Some power lines are still down as of Sunday afternoon after heavy winds, rain and dust storms pounded most of Arizona.

A man says his entire roof was torn off and they are now working to repair the damage.

"The roof blew off and I thought was probably a few shingles so I came down last night and low and behold the roof apparatus over the car park was missing and a lot of other damage," Phoenix resident DP Davis said.

He wasn’t home at the time of the storm but was called to check out his son's home after neighbors reported heavy storm damage.

Lena Hedrick experienced broken windows and lots of debris in her backyard.

"We were sitting at the dining room table saw a flash, heard a boom and then we felt the crash. In fact, it shook the house," she said.

Meteorologists with the National Weather Service say at this point they don’t think the cause of this damage was a microburst, but rather a squall that ripped through the Phoenix area. 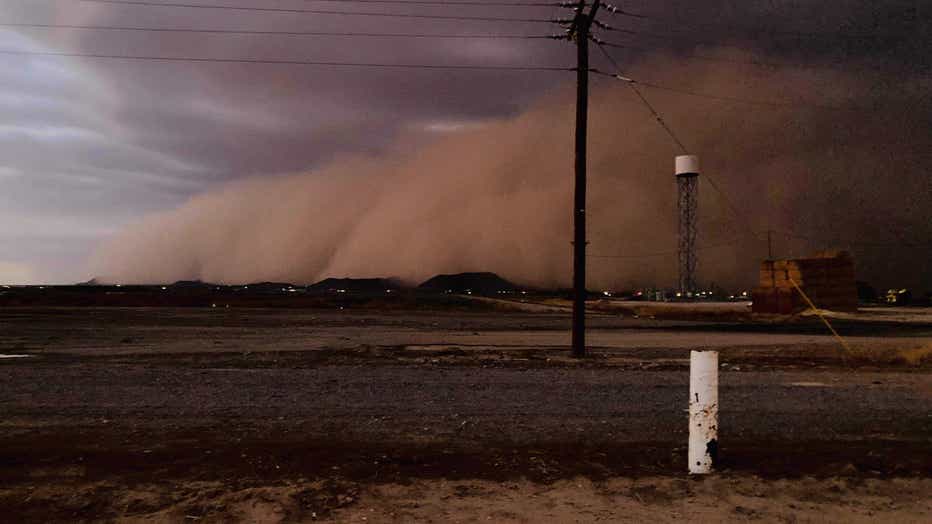