KYIV, Ukraine - Russian forces kept up their assault on Ukraine on Monday, firing on suburbs around the capital of Kyiv and attacking other cities, even as the two countries held another round of diplomatic talks, which ended without a breakthrough.

The fighting, now in its third week, continued to exact a human toll. Thousands of soldiers and civilians have died and the war has forced more than 2.8 million people to flee Ukraine. Some of the exhausted refugees have shared heartbreaking stories about leaving family members behind, with one woman simply saying: "I wish this war would end."

Here are some key things to know about the conflict:

What's happening in and around Kyiv?

Russian troops refocused their efforts to seize Kyiv on Monday, firing artillery on suburbs, which have seen some of the worst conflict during Russia's stalled attempt to take the capital. A local official said a town councilor for Brovary, east of Kyiv, was killed in fighting there.

Two people were killed when artillery hit a nine-story residential building in a northern district of the city early Monday, destroying apartments on several floors and igniting a fire. Ukrainian authorities said two more people died and seven were injured after Russian forces struck an airplane factory in Kyiv, sparking a large fire. 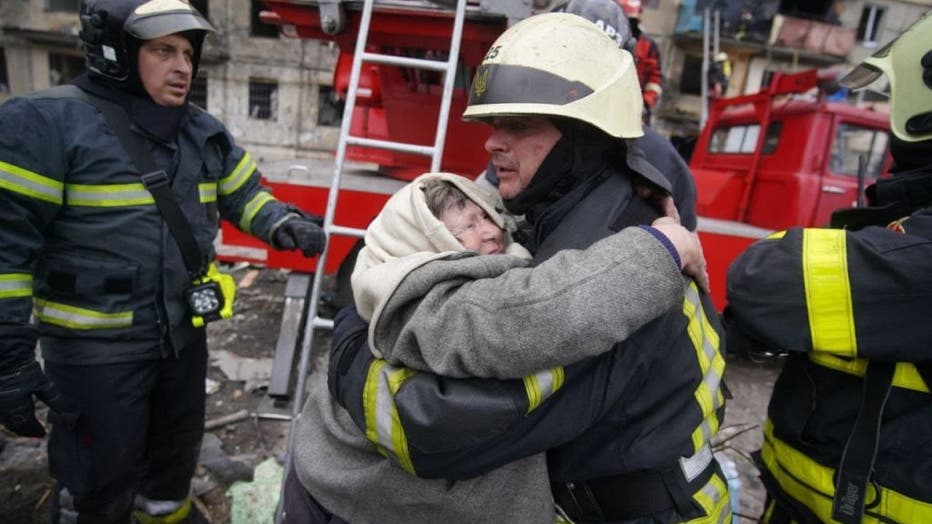 Firefighters rescue a civilian from a damaged apartment building that was hit by a Russian attack in Kyiv, Ukraine on March 14, 2022. (Photo by State Emergency Service of Ukraine/Handout/Anadolu Agency via Getty Images)

Air raid alerts sounded in cities and towns all around the country overnight, from near the Russian border in the east to the Carpathian Mountains in the west.

The office of Ukrainian President Volodymyr Zelenskyy reported Monday that airstrikes hit residential buildings near the important southern city of Mykolaiv, as well as in the eastern city of Kharkiv. Explosions also rang out overnight around the Russian-occupied Black Sea port of Kherson.

Russia’s military said 20 civilians were killed by a Ukrainian ballistic missile strike on Monday in the eastern city of Donetsk, in the separatist Donetsk region. The claim couldn’t be independently verified.

Ukraine’s military said it repelled a Monday attempt by Russian forces to take over Mariupol. The Ukrainians said the Russian forces incurred losses and were forced to retreat. Satellite images from Maxar Technologies showed burning buildings and heavy damage across the city.

Overall, nearly all of Russia’s offensives remained stalled Monday after making little progress over the weekend, according to a senior U.S. defense official who spoke on condition of anonymity to discuss the Pentagon’s assessment. The official said Russian forces have launched more than 900 missiles but Ukraine’s airspace is still contested, and Russia has not achieved total air superiority.

A top Red Cross official said the war has become " nothing short of a nightmare " for those who remain in besieged cities.

The Associated Press has learned that a pregnant woman and her baby died after Russian forces bombed a maternity hospital in Mariupol. After Wednesday's attack on the hospital, the woman was seen in AP video and photos, stroking her bloodied lower abdomen as rescuers rushed her through the rubble. It was among the most brutal moments so far in Russia’s war in Ukraine.

The woman was transferred to another hospital — surgeon Timur Marin said the baby showed no signs of life after a Caesarean section, and attempts to resuscitate the mother failed.

The U.N. has recorded at least 596 civilian deaths, though it believes the true toll is much higher. Ukrainian officials said that at least 85 children are among the dead. 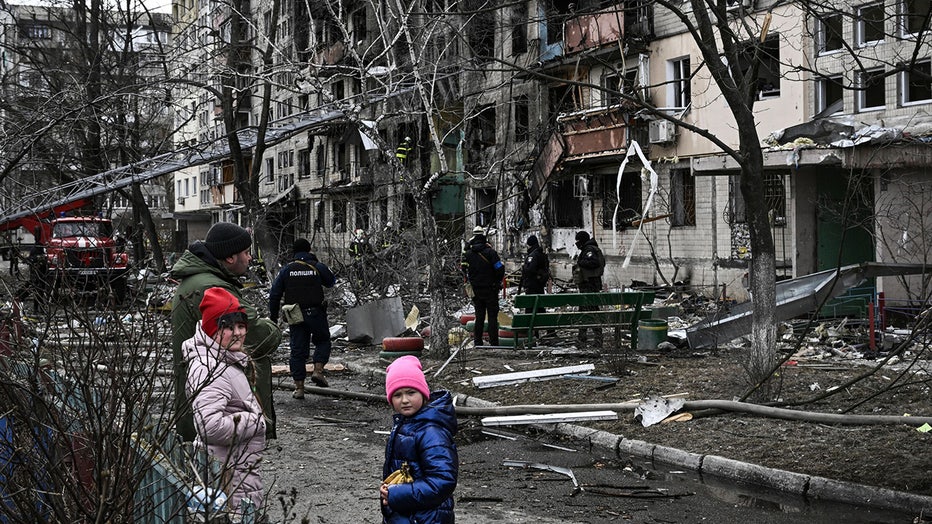 A child looks on a she stands in front of a destroyed apartment building following shelling in the northwestern Obolon district of Kyiv on March 14, 2022. (Photo by ARIS MESSINIS/AFP via Getty Images)

What are Ukrainian refugees saying?

In the Polish border town of Przemysl, exhausted refugees said they wished the violence would stop.

Alexandra Beltuygova, a 33-year-old who fled from Dnipro, between Kyiv and Mariupol, said she spends her days crying after leaving her husband and parents behind, and, "I wish this war would end." Many of the displaced are women and children, as men between the ages of 18 and 60 were not allowed to leave Ukraine.

Anjela, 55, a refugee from Poltava who wouldn’t give her last name, said that only a NATO intervention could end the violence. Zelenzkyy has repeatedly asked NATO to establish a no-fly zone over Ukraine, but military experts have said that is unlikely.

"I don’t know when I will see my husband. I don’t know when my children will return home," Anjela said. "I beg you, it depends only on you! Close the sky, everything else we will do ourselves."

The Ukraine Defense Ministry provided an update on combat with Russian forces across the country as the war has entered its third week. Despite Ukraine officials' positive outlook, it appears Russia's intention of a major move towards Kyiv is imminent.

What has the AP directly witnessed or confirmed?

After Russian forces shelled a nine-story apartment building in the northern Obolonskyi district of Kyiv, firefighters worked to rescue survivors, painstakingly carrying an injured woman on a stretcher away from the blackened and still smoking building.

A Russian airstrike near a Ukrainian checkpoint caused extensive damage to a downtown Kyiv neighborhood on Monday. Ukrainian officials said the airstrike killed one person and injured six others.

Kateryna Lot said she was in her apartment while her child did homework online when they heard a loud explosion.

"The child became hysterical, our windows and the balcony were shattered, part of the floor fell down," Lot said. "It was very, very scary. The child started screaming so we took him, ran to the door and down to the shelter."

Fox News reporter Benjamin Hall has been injured while reporting on the war between Ukraine and Russia. Hall was located right outside of Kyiv when he was injured and has been hospitalized. Hall has three young daughters at home.

How are talks between Russia and Ukraine going?

A fourth round of talks were held Monday but ended without a breakthrough after several hours, according to Ukrainian presidential aide Mykhailo Podolyak. Podolyak said the negotiators took "a technical pause" and planned to meet again Tuesday.

Zelenskyy has called on Russian President Vladimir Putin to meet with him directly, a request that has not been met by the Kremlin.

White House press secretary Jen Psaki said Monday that there have been no signs of de-escalation that would demonstrate Putin is negotiating in good faith.

What's happening in other countries?

Anxiety was building Monday in Poland, after a weekend Russian missile attack in western Ukraine killed at least 35 people. The attack, just 15 miles (24 kilometers) from the Poland border, prompted Poles to rush to passport offices and stockpile essentials amid fears the war could spill into their country.

In Russia, a live evening news program on state television was interrupted by an anti-war protester. An anchor was speaking during the newscast when a station employee appeared on camera behind her holding a sign with the headline "no war" scrawled in English across the top. The poster included a message calling on people not to believe Russian propaganda.

Zelenskyy is scheduled to deliver a virtual address to U.S. Congress on Wednesday.