La Cree Jackson, a parent of a seventh-grader at the school, told FOX Television Stations that the assignment was really distasteful.

CHICAGO - Before schools shuttered during the pandemic, Ayaana Johnson worried every time she dropped her daughters off at school.

Johnson, a Black woman, says racism is rampant in her predominantly white Georgia town. At her daughters’ school, a student once used racial slurs and told another child he doesn’t play with "brown people." She says teachers are quick to punish or reprimand Black children and Ku Klux Klan flyers can be found in mailboxes.

"I knew from pregnancy on that this would be something we’d have to deal with," said Johnson, who asked that the town not be identified because she was concerned about potential fallout. "This is the kind of area we live in, so you can imagine that you’re always going to feel protective of your children."

As schools reopen across the country, Black students have been less likely than white students to enroll in in-person learning — a trend attributed to factors including concerns about the disproportionate impact of the coronavirus on communities of color, a lack of trust that their schools are equipped to keep children safe, and the large numbers of students of color in urban districts that have been slower to reopen classrooms.

But many Black parents are finding another benefit to remote learning: being better able to shield their children from racism in classrooms.

"Now that they’re home, we feel safer," said Johnson, who was keeping her two young daughters home despite options being made available for in-person learning. 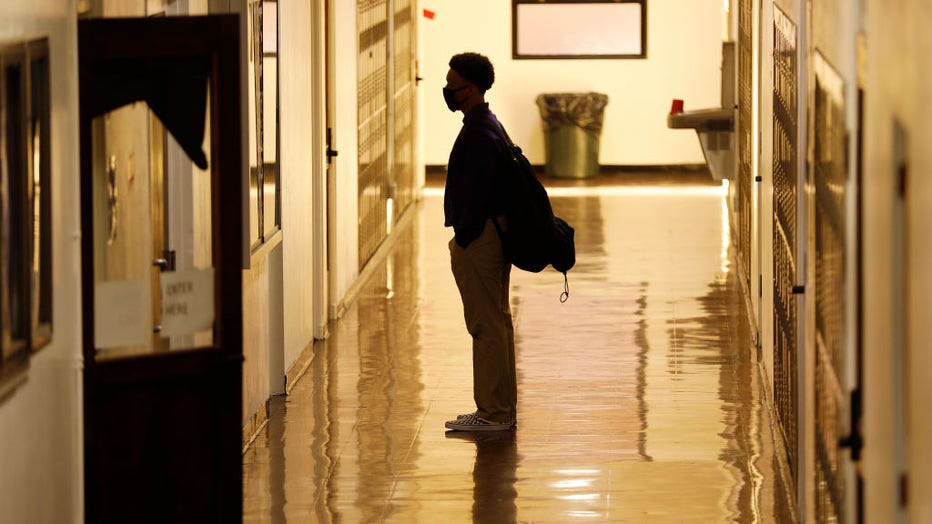 FILE - A student on campus for the first time as students return for in-person instruction at a high school in Long Beach, California on March 24, 2021. (Al Seib / Los Angeles Times via Getty Images).

White students have been far more likely to be back in the classroom, with 52% of white fourth-graders receiving full-time, in-person instruction in February, the latest month with results available from surveys by the Biden administration. By contrast, less than a third of Black and Hispanic fourth-graders were back at school full time, along with just 15% of Asian American students.

Even before the pandemic, concerns about racially hostile environments contributed to large numbers of Black parents turning to homeschooling, said Khadijah Ali-Coleman, co-director of Black Family Homeschool Educators and Scholars. There has since been a surge in homeschooling among Black families.

"Racism in schools plays a huge, huge role in a family’s choice to do homeschooling," Ali-Coleman said. "That racism can manifest in a lot of different ways, from a teacher who criminalizes every behavior to not recognizing how curriculums exclude the experiences of Black people to not presenting Black children with the same opportunities such as accelerated classes as white children."

Ali-Coleman chose homeschooling for her own daughter partially due to racism in schools. And while remote learning is different from homeschooling, she said she understands how the switch to remote learning would make Black parents feel more empowered and able to oversee the racism their children are facing.

Many remote learning parents have also reached out to her for advice after seeing for the first time the racism their children face.

"I think this has been eye-opening to a lot of parents," she said. "They’re finally getting to see what goes on in classrooms for Black and brown students, and I think many are dismayed."

Remote learning also puts parents in a better position to intervene if necessary.

"When they’re at school, you have no clue what they’re going through unless you do the digging or they tell you," said Erica Alcox, a mother of a 15-year-old high school freshman in Atlanta. "Remote learning lets you peek into the classroom. It puts more power back in our hands."

The updated CDC guidelines, announced on March 19, signal the agency’s turn away from the 6-foot distancing recommendation.

Alcox, who has been a teacher since 1998, said her son feels safer at home, where he can worry less about how schools police Black children and about bullying. She said remote learning can also offer opportunities for teachers to learn from parents.

"As a teacher, I would welcome this opportunity for parents to be more involved and to be more able to hold me accountable if need be," she said.

Many parents also say they feel more empowered in having more control over what their children learn. While many schools largely ignore or gloss over Black history, culture and voices, remote learning allows parents to better see what’s missing.

Johnson does this through efforts like socially distanced backyard African dance lessons. Tanya Hayles, founder of Black Moms Connection, an online network of more than 16,000 Black mothers with chapters across North America and Asia, said she makes sure to monitor Black History Month lessons to fill in any gaps in coverage.

Hayles said she has noticed discussions among members about how remote learning has allowed Black mothers to better shield their children from racism.

A mother of an 8-year-old son in Toronto, Hayles has seen the benefit of remote learning in her own life. Most days, she works at a table beside her son to keep an eye on him and the classroom, where a lack of diversity among students and staff at her child’s affluent, predominantly white school is a concern.

"When your child enters the school system, you are no longer just a parent," she said. "You’re an advocate, a detective, a cheerleader, so many things. And in some ways, remote learning makes that work easier."

RELATED: Assignment at Mississippi middle school asks students to ‘pretend like you are a slave’