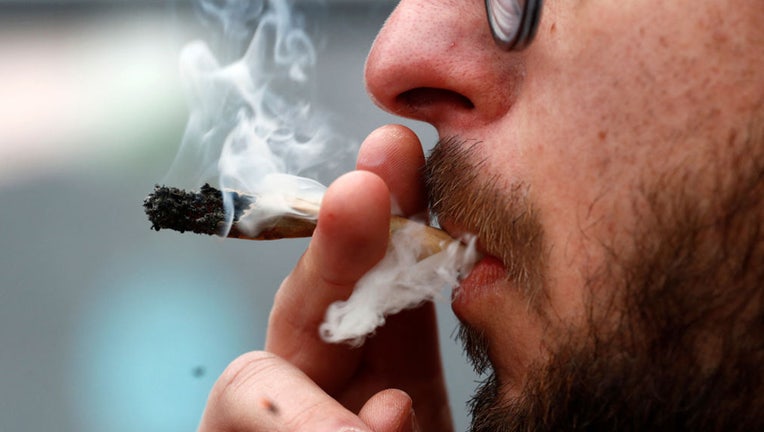 FILE - A man smokes marijuana in the form of a joint. (JAVIER TORRES/AFP via Getty Images)

Researchers in Canada found that regular marijuana smokers suffered more inflammation in their airways and more cases of emphysema compared to nonsmokers and tobacco-only smokers.

The retrospective study took information from patients between 2005 and 2020 which included 56 regular pot smokers, 33 tobacco-only smokers and 57 nonsmoking cancer patients.

Of the marijuana smokers, 50 also smoked tobacco, and their ages were 49 years, give or take 14 years, according to the study’s principal investigator, Giselle Revah.

It was emphasized that patients who smoked weed exclusively were only a small part of the cohort because recreational marijuana was not legalized until 2018 in Canada and data on smokers who solely partook in weed was not as widely available.

Revah is also a chest radiologist and she said one of the motivations for this study was to see if she and her team could spot the differences between a weed smoker, a tobacco smoker and nonsmokers and to pinpoint if there were any true ailments that are more prevalent in weed smokers as apposed to non-weed smokers.

Nothing is better than fresh air

As recreational marijuana becomes legalized in more and more U.S. states and in countries such as Canada, the notion that smoking weed is "better" for you as opposed to tobacco is not really accurate, at least according to the results of this study.

President Joe Biden announced on Thursday he will issue an executive order pardoning all people convicted of 'simple marijuana' possession under federal law, in what amounts to the most extensive White House action taken to date in U.S. drug policy.

"There is a perception that marijuana is safe, right? People think that it’s safer than cigarettes and this study raises concerns that, well that may not be true. It signals that marijuana could be more harmful than people realize because we found an association between smoking marijuana and irreversible damage," Revah said.

"The reality is, when you’re inhaling a substance into your lungs, you damage both the large and the small airways. It’s similar to tobacco. We saw similar damages," Revah continued.

And one reason why weed smokers in this particular study were possibly more prone to developing lung ailments such as emphysema and inflamed airways is not only due to the fact that smoke is being inhaled into the lungs but it was also hypothesized that these ailments occurred because many weed smokers don’t use filters like those in cigarettes.

"If you’re smoking an unfiltered joint, then more of the marijuana particulates are going to reach the airways, get deposited there and cause inflammation," Revah said. "And then the other thing is that marijuana is inhaled differently than cigarettes. It’s inhaled usually with a longer breath hold and more smoke inside."

Weed smokers were found to have more mucus build-up as well as thickening of their airways in comparison to nonsmokers and tobacco smokers.

Researchers also found an almost similar presence of coronary artery calcification, which is basically calcium build-up in the arteries around the heart, in both weed smokers and tobacco-only smokers.

Now that recreational marijuana is legal in Canada, Revah and her team have begun prospective studies which will look at current weed smokers and perform chest scans on participants who regularly use cannabis today as opposed to looking at previous chest scans.

"How much, how often do you need to smoke and for how long before we start to see changes," she added.