A Chandler public library is in the beginning stages of reopening nearly half a year after a print shop next door exploded, heavily damaging businesses nearby.

CHANDLER, Ariz. - It's been about five months since the large explosion at a Chandler printing shop that seriously injured several people and forced businesses nearby to close due to the damage.

Now, one of those damaged buildings has an exciting update.

Platinum Printing was decimated by the explosion on Aug. 26, 2021 caused by a natural gas leak. Right next door was Sunset Library, a public library. The massive explosion sent parts of the printing shop flying into the air, causing major damage to the library.

After the explosion caused a water main break, their lights were damaged, as well as many books. Luckily, no one in the library was injured. However, for the last five months, the library has been closed as they make the repairs.

"It was pretty alarming. The explosion next door definitely felt like the building was lifted and slammed down. There was definitely panic about what had happened and once we realized the store next door had exploded, we were concerned for them," said Sue Van Horne, librarian at Sunset Library. "Lighting was falling out of the ceiling, stuff was coming out of the ceiling in the back."

The library is now partially open for book pick-ups only, and it plans to fully open in mid-February.

The explosion drew a huge response, with about 50 emergency vehicles and over 100 personnel from seven different agencies. 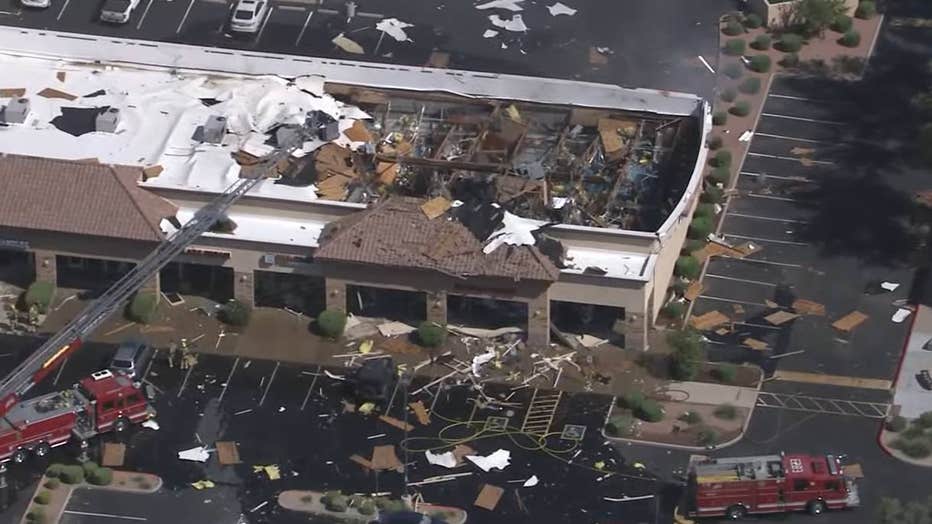 The aftermath of an explosion in Chandler.