How Biden plans to distribute free COVID-19 at home tests

WASHINGTON - The White House is finalizing plans to ship 500 million free at-home COVID-19 tests to Americans nationwide and has awarded its first contracts as part of this pledge.

"We are actively finalizing the details of the distribution mechanism, including a website as we've talked about," White House Deputy Press Secretary Karine Jean-Pierre told reporters Friday. "I would expect us to provide those details next week, and yes, these tests will be sent out through the mail."

"What I can say is, last night we issued out our first letter award to provide tests toward this half a billion. This is just the first," Jean-Pierre added.

President Joe Biden announced the initiative last month as part of a number of actions in the face of the rapidly-spreading omicron variant of the coronavirus, which also includes increased support for overwhelmed hospitals and more vaccination sites nationwide.

The U.S. awarded its first contract on Thursday to Goldbelt Security in Newport News, Va., worth $51.6 million, as part of the delivery of COVID-19 test kits. The effort is being funded by the $1.9 trillion American Rescue Plan Act passed by Congress in the spring, according to a statement shared by the Department of Defense.

A second contract to Revival Health Inc., located in Manhattan Beach, California, was later announced by the Defense Department "to procure 13.3 million over-the-counter COVID-19 test kits." It did not say how much the company would be paid.

People will use a new website to order their tests, which will then be sent to them by the U.S. Postal Service. Administration officials have said the first batch of tests would be shipping in January.

The plan marked a major shift for Biden, whose earlier plan had called for many Americans to purchase the hard-to-find tests on their own and then seek reimbursement from their health insurance. 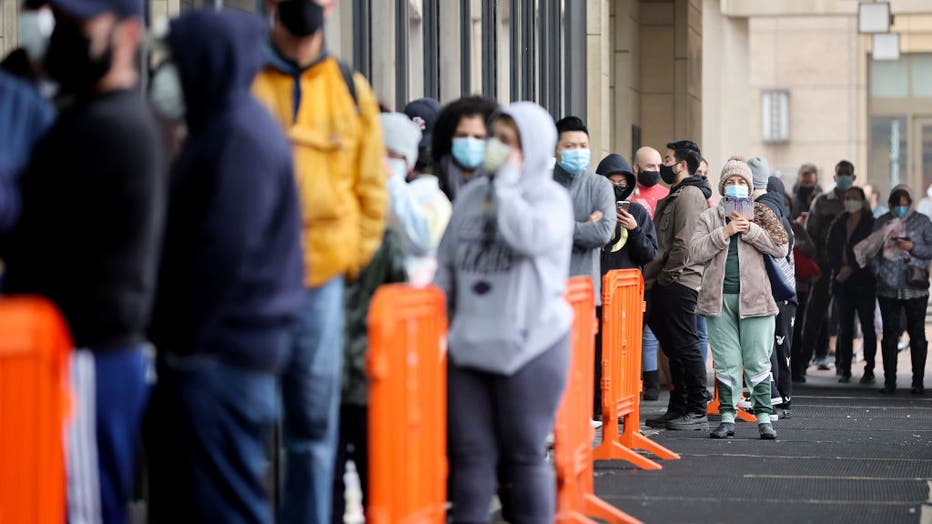 FILE - People wait in line to be tested for COVID-19 at Union Station on Jan. 7, 2022, in Los Angeles, California. Free distribution of COVID rapid test kits for those who received vaccination shots or booster shots was also held nearby in Union Stat

Meanwhile, as new COVID-19 cases hit record levels due to the exponential spread of the omicron variant, demand for virus testing and at-home testing kits has skyrocketed — leading to more opportunities for scams.

The Better Business Bureau, the Federal Trade Commission, and the U.S. Department of Health and Human Services Office of Inspector General have all issued related statements in recent days about fake and unauthorized at-home COVID-19 testing kits being sold online and other related schemes.