2021 monsoon season ends as one of the wettest on record

A meteorologist with the National Weather Service said the 2021 monsoon season has been one of the wettest seasons on record, as the season comes to a close on Sept. 30. FOX 10's Danielle Miller reports.

FLAGSTAFF, Ariz. (AP) - Cities across the U.S. Southwest hit impressive rainfall totals this summer, bringing much-needed — but temporary — relief to a region that has been mired in drought.

The winter, however, could be disappointing, with an expected weather pattern that typically means less snowpack that rivers and streams rely on, weather experts said.

The annual rainy period known simply as "the monsoon" ended Thursday with widespread precipitation across New Mexico and Arizona, including snow in higher elevations. The seasonal weather pattern starts in mid-June and brings high hopes for rain but doesn’t always deliver.

This year, it did but not equitably.

Payson, about an hour and a half drive north of Phoenix, had more than twice its normal rainfall, logging it’s wettest monsoon on record with nearly 15 inches (38 centimeters). Farther east, Show Low’s rain also hit a record 12.5 inches (31.7 centimeters). In the desert of southern Arizona, Tucson recorded its third-wettest monsoon, with 12.7 inches (32.5 centimeters).

Phoenix had the second-most days of measurable rain during the monsoon, with 23, one day short of the record of 24 days set in 1896. But the city was nowhere near the top in overall rainfall.

Many areas had above-normal precipitation, including Flagstaff, Prescott and Canyon de Chelly near Chinle on the Navajo Nation. The rainfall was more remarkable following two consecutive dry monsoons.

"It just kept going," said Mike Crimmins, a climatologist at the University of Arizona. "It was pretty epic, especially for the lower desert areas of Arizona from Tucson to Phoenix and out towards Yuma."

Albuquerque was still below average for the calendar year by about 2 inches (5 centimeters), said Todd Shoemake at the National Weather Service in Albuquerque. After dismal rain in August, the last gasps of the monsoon provided a big boost and put September closer to average, he said.

"Going back to that spotty nature of the monsoon, it’s kind of hit and miss," Shoemake said. "And we had a lot of misses there in August."

Roswell in the southeastern part of the state had a huge rainfall deficit in the early part of the year, he said, but ended the monsoon with more than 15 inches (38 centimeters) — well above normal.

The Four Corners area where Colorado, Utah, New Mexico and Arizona meet didn’t fare nearly as well. It had below-average rainfall in general and remains in severe to extreme drought, according to the U.S. Drought Monitor.

Despite the rainfall, the Southwest is still trending toward hotter, drier weather because of climate change. Wide swings in weather also are possible.

A dry winter could be in store for the Southwest. A weather pattern known as La Niña is setting up, which typically means less moisture.

"Our short-term drought relief may be short-lived," Crimmins said. 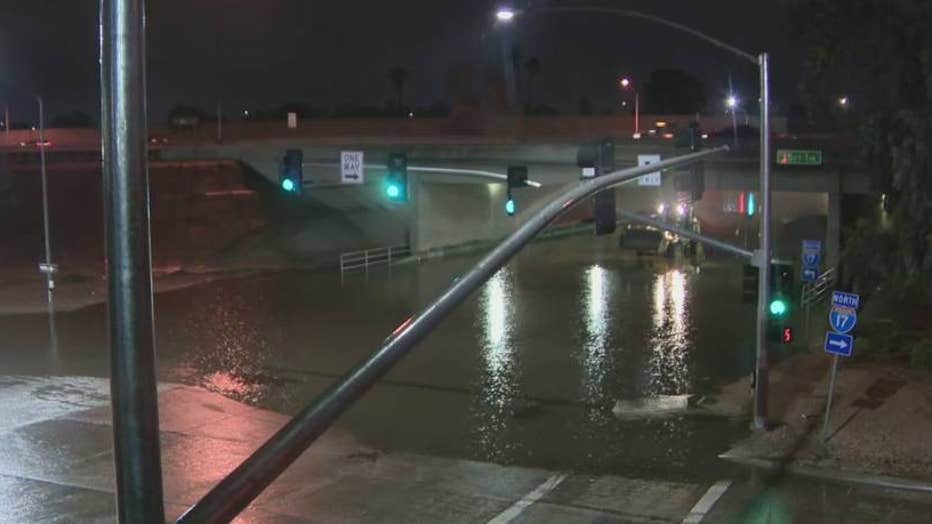 The underpass at Interstate 17 and Greenway in Phoenix was flooded during a storm on July 23.