Those involved in plans for the Tempe Entertainment District presented their plans in front of an aviation board on May 19, and some at the meeting expressed concerns over aviation safety. FOX 10's Irene Snyder reports.

TEMPE, Ariz. - Months after the Arizona Coyotes proposed a $1.7 billion development in Tempe that will include a hockey arena, Tempe leaders heard from developers and airport officials over the plans.

Renderings released by the Coyotes in 2021 include proposed restaurants, shops and apartments on a 46-acre tract of land near Rio Salado and Priest Drive, not far from Loop 202.

The team said the arena would be funded by private investors, but would seek city sales tax revenues to help pay for $200 million in additional costs, including infrastructure work.

"They seem to understand that the days of taxpayers shoveling out cash so sports teams and billionaires can build arenas are over, and I think that’s a good thing," said Coyotes fan Trey Terry.

The Coyotes were the only ones who put in a proposal for the tract of land in question in 2021.

"Cautiously optimistic is how I’d put it," said Alexi Rentzis, a longtime Coyotes fan. "If they get the deal, I’m like, great! They’re not leaving."

Team to play at new ASU Multi-Purpose Arena, for now 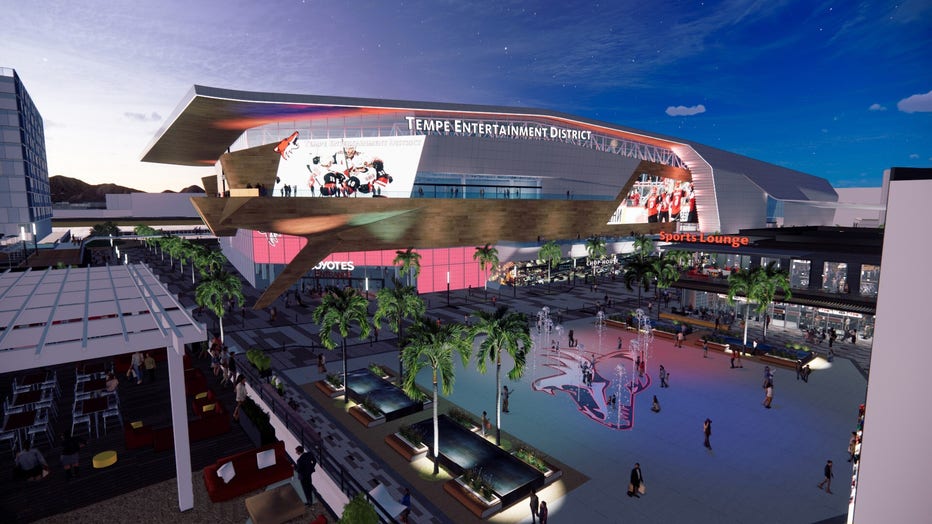 Renderings released by the Arizona Coyotes include proposed restaurants, shops and apartments on a 46-acre tract of land near Rio Salado and Priest Drive, not far from Loop 202. (Courtesy: Arizona Coyotes)

The Coyotes had been leasing Gila River Arena on an annual basis since the Glendale City Council voted to opt out of a multimillion-dollar long-term deal in 2016. Glendale announced in August 2021 that it will not renew its agreement with the franchise beyond the 2021-22 season.

The Coyotes played their final game at Gila River Arena in late April of 2022.

Team owner Alex Meruelo has previously said he plans to keep the Coyotes in Arizona. In February 2022, team officials announced they have signed a deal with Arizona State University to play at the school's new multi-purpose arena in Tempe until at least the 2024-2025 NHL season. The deal has been approved by the ARizona Board of Regents.

The Coyotes have played at Gila River Arena since moving from America West Arena, which they shared with the NBA’s Phoenix Suns, in Downtown Phoenix in 2003. That venue is now called Footprint Center.

Plans for entertainment districted presented to Aviation Board

On May 19, 2022, developers presented their project plans to the Aviation Board.

While no decisions were made during the meeting, both sides presented plenty of data about airport operations.

Some take issue with the fact that the district, as planned, would be built within 10,000 feet of Phoenix Sky Harbor Airport's center runway. Critics say the construction could cause runway delays, and impact pilots' line of sight. They also brought up noise concerns for residents in the area.

Developers, meanwhile, say they have met with airport technical teams. They also say cranes are lower than 40 feet in height, and that the height of their buildings have been reduced, after concerns were raised in previous meetings.

Some of the board have asked both sides to work collaboratively, because the studies had such different results.

On May 20, we received an e-mail from Sky Harbor officials that contains information they say provide context and clarification following the board meeting.

"While the [Tempe Entertainment District] developer’s presentation claims that the Aviation Department’s crane analysis was ‘fabricated,’ the Aviation Department’s presentation was actually based on information provided by the developer. No corrections or changes were requested after Phoenix Aviation staff’s analysis was presented at the April 21 Board meeting, which has been publicly available on skyharbor.com since that date," a portion of the e-mail read.

Aviation officials also said the presentation given by developers "provided information not previously shared with the City of Phoenix Aviation Department."

"Sky Harbor officials learned for the first time in the meeting that the developer plans to lower the project’s top construction crane height to 165 feet and has committed to the tallest crane being up no longer than 21 days. The Airport is pleased that the developer has listened to concerns about crane heights from the Airport and the airlines that serve it and is encouraged to see this change to the plan," a portion of the e-mail read.

Aviation officials, however, said the developers "did not accurately address the most important obstacle – the planned residential high rise building which violates an Intergovernmental Agreement (IGA) between Phoenix and Tempe."

"That agreement prohibits residential units from being built in the high noise impacted areas along the Salt River. In exchange, airlines departing to the east follow a flight path that protects other Tempe neighborhoods from excessive noise," read a portion of the e-mail.

The IGA, according to aviation officials, is based on an FAA study that includes measures "specifically created to prevent residential in the noise impacted area where [Tempe Entertainment District] is proposed."

"The developer’s presentation is misleading, as it uses a table from the introduction to the study chapter of the Part 150 Plan. That table is not part of the Plan for land use along the Salt River Corridor," aviation officials wrote. "The foremost experts in Part 150 studies, the Federal Aviation Administration, previously wrote a letter to Tempe that explained their serious concern about this proposed development, clearly stating that residential development on this parcel is incompatible. City of Phoenix Director of Aviation Services Chad Makovsky made this point and more in his closing statement to the Phoenix Aviation Advisory Board."