PHOENIX - Arizona's attorney general on filed a request for a temporary restraining order to stop the Biden administration from implementing a controversial vaccine requirement as a lawsuit filed last month moves forward.

"Once a vaccine has been administered, it can never be undone," Attorney General Mark Brnovich said in a statement announcing the move. "The COVID-19 vaccine mandate is one of the greatest infringements upon individual liberty, federalism, and the separation of powers by any administration in our country’s history."

Arizona first sued in September after President Biden announced measures that will require federal workers and private-sector workers in businesses with more than 100 employees be vaccinated or take a COVID test weekly. It is expected to affect more than 100 million Americans.

"We've been patient but our patience is wearing thin and your refusal has cost all of us," Biden said from the White House. "This is not about freedom or personal choice. It's about protecting yourself and those around you."

The moves have infuriated conservatives, who have called them unconstitutional and damaging to businesses.

More than 160,000 migrants have been released into the U.S. in recent months, and there has been no mandatory vaccine requirement, nor a uniform testing requirement along the border.

On Friday, Brnovich's office requested a temporary restraining order to immediately halt the mandates – arguing that it is necessary due to vaccination deadlines, which are likely to pass before the filing for a preliminary injunction is heard fully.

"Our office is basically trying to do everything we can right now to say to the Biden administration, ‘stop.’ You cannot force anyone in Arizona to get the vaccine against their will it’s as simple as that," Brnovich said.

Federal employees are mandated to be vaccinated against COVID-19 by Nov. 22. There’s no alternative for weekly testing.

"There are literally federal employees now, federal contractors that are being told, ‘get the vaccine or you will lose your job,’" Brnovich said. "We’re talking not just somebody in Border Patrol, we’re literally talking about people that are working at NAU or ASU or UofA."

He says it’s also constitutionally suspect for the Biden administration to mandate vaccines for businesses with more than 100 employees – with the option of testing.

Garrick Taylor with the Arizona Chamber of Commerce says businesses are confused and cautious as they await guidance from the White House on how this mandate is actually going to work.

"No employer wants to risk hefty fines or some other sort of penalty," Taylor said, adding, "It's just that when it comes to a government mandate that often sparks confusion and concern about the implementation of the mandate, and perhaps what’s around the corner next time."

In an amended complaint filed alongside the request for a temporary restraining order, the AG argues that mandates violate the constitutional rights of workers and that it mandates the right to refuse vaccines available under Emergency Use Authorizations -- only the Pfizer vaccine has so far been approved by the FDA.

It also argues that the mandates will cause "substantial harm to Arizona’s economy and to Arizona businesses that will either have to fire valuable employees or give up lucrative government contracts."

It cited surveys that found that 85% of businesses said it would make retaining employees more difficult and 89% said some employees would quit.

Biden, however, has dismissed concerns about the mandate. On Thursday, he said that those who oppose vaccine mandates are attempting to make vaccines "a political issue."

The president also scoffed at those who oppose vaccine mandates on the basis of "freedom."

"I have the freedom to kill you with my COVID," Biden said, mocking what he sees as the attitude of mandate opponents. "No, I mean, come on, freedom." 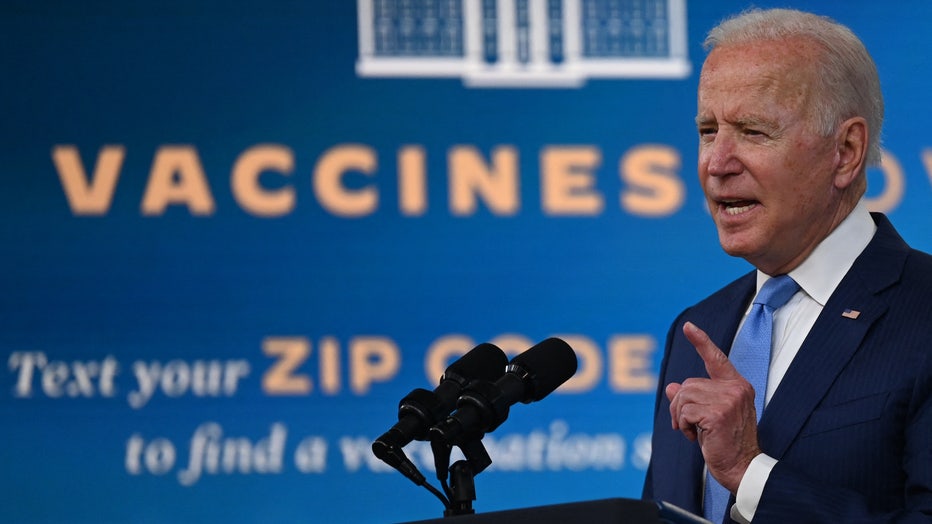 US President Joe Biden delivers remarks on the Covid-19 response and the vaccination program at the White House on August 23, 2021 in Washington, D.C. (Photo by JIM WATSON/AFP via Getty Images)