Brittney Griner’s agent on Monday responded to Russia settling on a trial date for the WNBA superstar months after she was arrested for allegedly bringing vape cartridges containing oils derived from cannabis through a Moscow airport.

Lindsay Kagawa Colas said the hearing was "administrative in nature and not on merits." She again implored President Joe Biden and Vice President Kamala Harris to cut a deal to bring Griner home.

"That said, the fact remains that the U.S. Government has determined that Brittney Griner is wrongfully detained and being used as a political pawn," she tweeted.

"The negotiation for her immediate release regardless of the legal proceedings should remain a top priority and we expect @POTUS and @VP to do everything in their power, right now, to get a deal done to bring her home."

The criminal trial was set for July 1, and the WNBA star was ordered to remain in custody for the duration of her criminal trial. The court in the Moscow suburb of Khimki extended her detention for another six months. She could face up to 10 years in prison if convicted.

Griner was seen being led into court with handcuffs. The 6-foot-9 center was wearing glasses and a gray T-shirt as she received word about the trial date.

Griner was arrested at Sheremetyevo Airport in February after she was accused of bringing in vape cartridges containing oils derived from cannabis through security. Her arrest came a week before Russia launched its invasion of Ukraine, but news of her detention did not make it out until March.

U.S. officials and the WNBA kept a low profile when it came to speaking out about Griner’s arrest. It was not until the State Department reclassified Griner as being "wrongfully detained" that her fellow basketball stars started to ramp up the pressure to get her released. 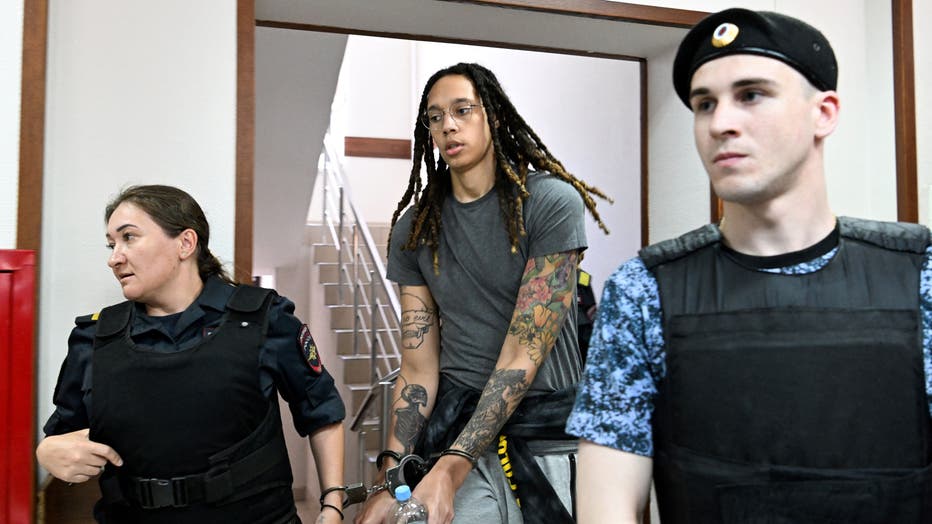 U.S. WNBA basketball superstar Brittney Griner arrives to a hearing at the Khimki Court, outside Moscow on June 27, 2022. Griner, a two-time Olympic gold medallist and WNBA champion, was detained at Moscow airport in February on charges of carrying i (Photo by KIRILL KUDRYAVTSEV/AFP via Getty Images)

Russian media has speculated about the potential of a prisoner swap for Griner with convicted arms dealer Viktor Bout, nicknamed the "Merchant of Death."

Bout is serving a 25-year sentence after he was convicted of conspiracy to kill Americans and providing aid to a terrorist organization. Russian officials recently downplayed any chance of the trade happening.

U.S. Secretary of State Antony Blinken was asked Sunday on CNN about a potential joint swap for Griner and another held American Paul Whelan, who is serving a 16-year sentence on an espionage conviction.

"As a general proposition... I have got no higher priority than making sure that Americans who are being illegally detained in one way or another around the world come home," Blinken said. "I can’t comment in any detail on what we’re doing, except to say this is an absolute priority."