Video posted to Facebook on Oct. 18, 2021, shows two firefighters lifting the cat after they freed it by breaking a few cinder blocks. Credit: Mesa Fire and Medical Department via Storyful

MESA, Ariz. - Firefighters in Arizona rescued a cat this week after it got stuck in a cinder block wall — and later learned the animal matched a lost pet pictured on fliers in the area.

The Mesa Fire and Medical Department, located in a city just east of Phoenix, said the incident was reported over the weekend when a resident found the cat trapped in her cinder block wall.

"It seems the cat entered the hollow wall at the top and found itself trapped when it crawled down to the base of the wall and got stuck with only its head sticking out of a very small opening," the department wrote.

Video shared by the department shows two firefighters in the process of freeing the cat. Using a halligan tool and sledgehammer, the crew had to break a few cinder blocks in the wall to rescue the animal that was in "obvious distress," officials said. 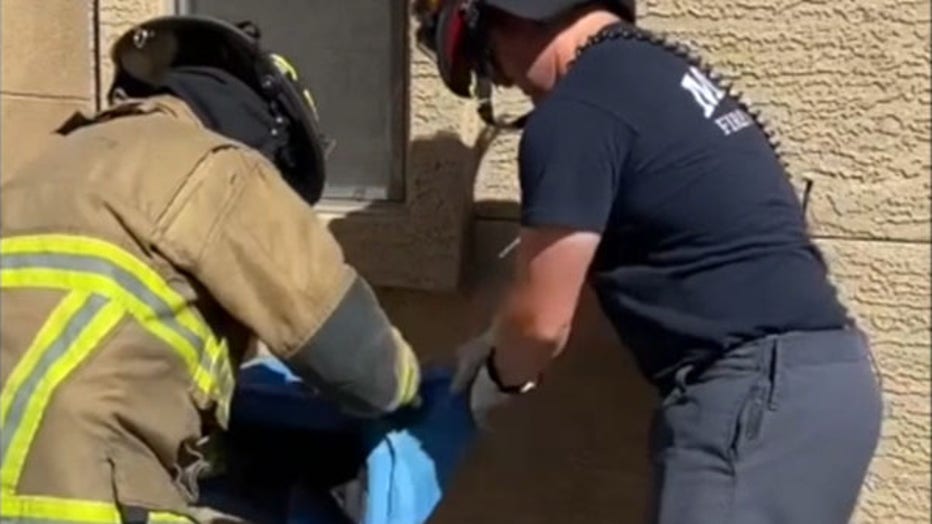 The cat was then treated by an emergency veterinary clinic.

And as luck would have it, the cat matched a description on a lost pet flyer, according to the department.

"The owner was contacted and directed to the pet in hopes of a happy reunion," it wrote on Facebook.

Other animals have made headlines for similar predicaments lately. A tiny kitten was also rescued in Arizona this summer after becoming stuck behind a double brick wall for at least a day.

Just last week, a family dog walked away unscathed after getting its head stuck in an iron door in Hungary. The animal also had to be freed by firefighters, who used a plate cutter and other technical equipment to remove the dog’s head from a small opening.

RELATED: Dog rescued by firefighters after getting head stuck in iron door