Over 400 Delta pilots in Atlanta, and more than 1,000 nationwide, are picketing ahead of Labor Day Weekend. They're pushing for better labor contracts.

ATLANTA - Pilots at Delta Air Lines voted to authorize union leaders to call a strike, but it might be a largely symbolic gesture, as hurdles remain before the pilots can legally walk off the job.

The Air Line Pilots Association said Monday that 96% of Delta pilots took part in the vote, and 99% of those favored calling a strike "if necessary" to get a new contract.

Airline unions are seeking big pay increases and could have leverage because of labor shortages during a rebound in travel.

"Today, Delta’s nearly 15,000 pilots sent a clear message to management that we are willing to go the distance to secure a contract that reflects the value we bring to Delta Air Lines as frontline leaders and long-term stakeholders," said Capt. Jason Ambrosi, chair of the Delta Master Executive Council. "Delta has rebounded from the pandemic and is poised to be stronger than ever, posting record revenues for the third quarter. Meanwhile, our negotiations have dragged on for too long. Our goal is to reach an agreement, not to strike. The ball is in management’s court. It’s time for the Company to get serious at the bargaining table and invest in the Delta pilots."

Atlanta-based Delta said the vote would have no impact on its flight operations. 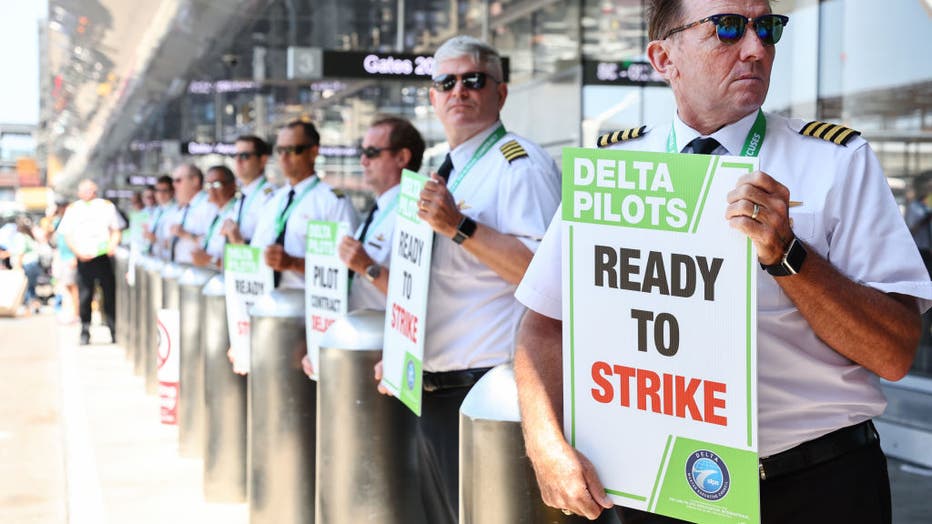 The airline said the union’s goal is "simply to gain leverage in our pilot contract negotiations." Delta said it has made significant progress in talks, that only a few contract sections are unresolved, and it expressed confidence in reaching an agreement.

Last week, American Airlines offered its pilots 19% pay increases over two years, an offer that could serve as the model for talks at Delta and United Airlines. Leaders at American’s union have not decided whether to send the offer to a ratification vote.

Delta pilots are working under pay rates set in 2016. Negotiations for a new contract began in April 2019, were paused in March 2020 for the pandemic, and resumed in January.

By federal law, labor contracts in the airline industry do not expire. Before workers can legally strike, federal mediators must determine that more talks would be pointless. Even after that, the president and Congress can intervene to block a strike

Before a strike can take place, the National Mediation Board must first decide that additional mediation efforts would not be productive and offer the parties an opportunity to arbitrate the contract dispute. If either side declines the arbitration, both parties enter a 30-day "cooling off" period, after which pilots and management can engage in self-help—a strike by the union or a lockout by management.