Residents return to Bagdad after evacuation orders were lifted

The town was evacuated on May 28 as a result of the Spur Fire.

BAGDAD, Ariz. - A wildfire has destroyed at least a dozen homes in a remote Arizona mining town, but authorities said firefighting crews managed to halt the blaze’s advance with assistance from aircraft dropping water and fire retardant.

The fire that started the afternoon of May 27 in the community of Bagdad in desert hill country about 100 miles (160 kilometers) west of Phoenix prompted authorities to issue 570 evacuation notices to residents.

Evacuation orders for the community of Bagdad were lifted on May 28, and on May 29, officials with the Arizona Department of Forestry and Fire Management announced that the fire is 75% contained. The fire burned 150 acres (61 hectares) in Bagdad after it started.

There were no immediate reports of injuries in the town of about 2,000 people and there were conflicting reports about how many homes burned.

The Yavapai County Sheriff’s Office estimated in a statement that 25 to 30 homes "were lost" while the Arizona Department of Forestry and Fire Management said 13 homes plus at least 10 other buildings were "confirmed destroyed."

An initial investigation indicated that road work may have started the fire but the investigation was continuing, the sheriff’s office said in a statement Thursday night.

Air tankers and helicopters dropped fire retardant and water on homes, brush and dry grass and a shelter was set up at an elementary school in the town of Wickenburg, about an hour’s drive from Bagdad.

Timeline of the Spur Fire:

The fire is 90% contained, and state fire crews have relinquished control of the Spur Fire back to local authorities.

State Forestry officials say the fire is 75% contained. Utilities have been fully restored.

Evacuation orders issued for Bagdad were lifted, according to Arizona forestry officials. Containment is at 50%.

Evacuation orders have been issued for some residences in Bagdad due to an "extremely active fire," according to the Yavapai County Sheriff's Office.

Homes north of Main Street in Bagdad, as well as homes east of Lindahl Road, are being urged to evacuate. Residents can take shelter at the Hassayampa Elementary School at 195 East Coconino Street in Wickenburg.

Residents speak out after evacuations ordered for Spur Fire

1,500 people have been evacuated from their homes as the Spur Fire continues to rage across Bagdad in Yavapai County. FOX 10's Irene Snyder reports.

1,500 people received the "GO" notice to evacuate, and 25 buildings have been destroyed or damaged, along with a vehicle and three other buildings.

Power is out in the town for safety reasons. Phone lines are also down because the fire has burned through fiber optic cables.

Multiple structures are in danger, including some mining infrastructure, officials say.

State Routes 96 and 97 are closed coming into Bagdad.

According to the Yavapai County Sheriff's Office, a road crew may have started this fire.

Public Affairs Officer for Department of Forestry and Fire Management Tiffany Davila says it does appear to be related to dry conditions.

"Dry not only in Baghdad but across the state, so that really is what firefighters are dealing with right now," said Davila.

No injuries have been reported. 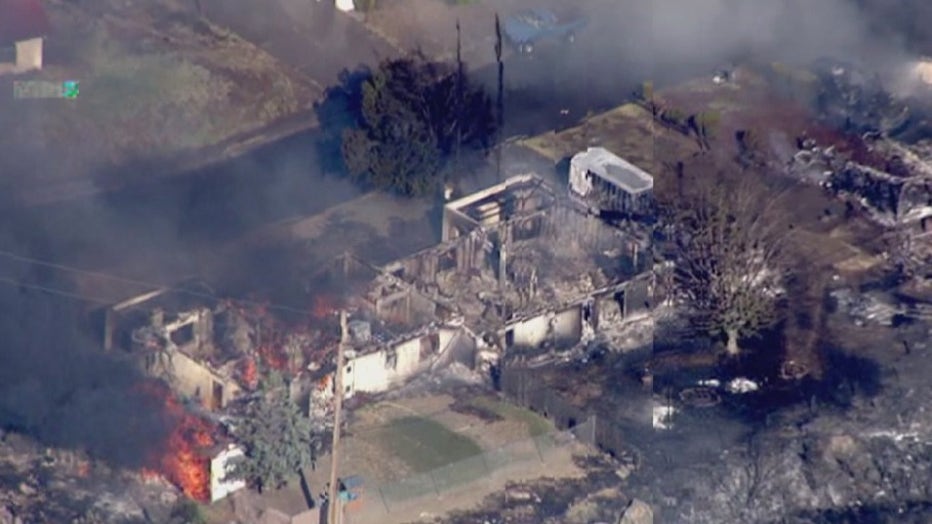 Residents speak out about fire

Christy Watson her husband John quickly fled from their Bagdad home along with their dogs and all of their neighbors.

They’re now staying at a friends’ house in Hillside, 20 miles east of Baghdad.

"At our friend’s house and there is probably…14 dogs here, seven other families," said Watson. "No one has eaten all day."

Meanwhile, James Holt is waiting for an update on his granddaughter and her family, as they work to help get people out of the area. He last heard from her early this evening.

"She sent me a message saying she was fine, she was directing traffic, and John and the kids were at the school," said Holt.