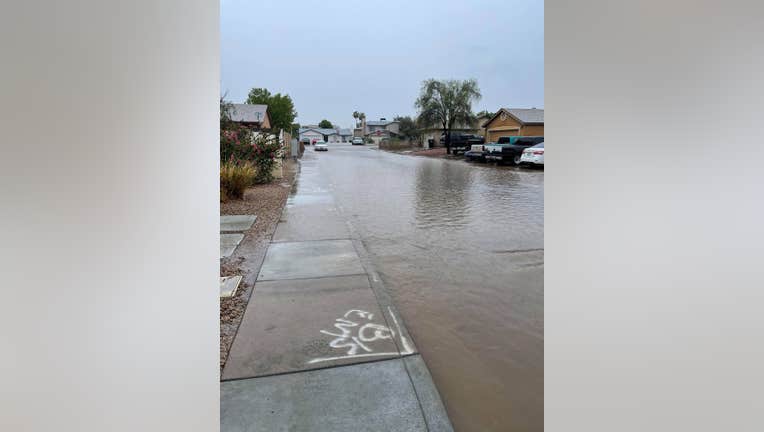 Major streets and neighborhoods in West Phoenix have flooded due to heavy rain Sunday afternoon. This photo was taken near 83rd Avenue and Encanto. (Photo: Ramon Garcia)

PHOENIX - The Phoenix area experienced more rain, thunder and lightning on Saturday and Sunday as monsoon weather rolled back into the Valley.

Heavy rain caused flooding along major streets across the Valley, with numerous weather advisories issued for the Phoenix metro area.

By Sunday night, the rain cleared out for the most part, but not before setting some new records.

Watch floods across the Valley

On Sunday, flash flood warnings remained in place for most of the day in counties across the state. Check the latest warnings here.

Weather officials say that anywhere from 1"-2.5" of rain fell over the West Valley within 3 hours. This includes Goodyear, Litchfield Park, Surprise and Glendale.

Viewers reported major flooding in streets along west Phoenix, including areas between 56th to 91st Avenue and from Maryland to Thomas Road.

Cars were seen on video driving half-submerged in street water.

Severe flooding was reported in Avondale, Sun City, Peoria, Glendale, and other areas along the western parts of the Valley.

A teenage girl, Faith Moore, 16, went missing after she was washed away in Cottonwood floodwaters.

The following areas of Interstate 10 in west Phoenix are restricted due to flooding:

"PLEASE do not cross into this water to save time," ADOT officials said. "You don't want to stall and get stuck."

In the city of Buckeye, officials are advising residents to avoid the following areas:

The days leading up to the weekend also were much cooler than usual because of storm activity.

The low temperature on Sunday was 73 degrees, 12 degrees below the average.

A Flash Flood Watch is in effect for 13 Arizona counties. The following counties are affected:

The expected rainfall could cause flash flooding in washes and areas with poor drainage systems. This is particularly an issue in areas with past burn scars from wildfires, which will be "especially prone to flash flooding and debris flow," according to the National Weather Service.

APS is working around the clock to restore power to many who lost it during the storms. Click here for an outage map.