Several hikers struck by lighting while in the Grand Canyon

A woman is in critical condition after she was struck by lightning during a monsoon storm in the Grand Canyon. Another man was injured and is expected to be OK.

GRAND CANYON NATIONAL PARK - Multiple people were injured after being struck by lightning while hiking during a monsoon storm in the Grand Canyon.

According to the National Park Service (NPS), officials received a report of multiple people struck by lightning at the Bright Angel Trailhead just before 3 p.m. on July 20.

Crews responding to the scene found a 30-year-old man and 28-year-old woman unresponsive, however, the man regained consciousness without medical assistance.

Life-saving measures were performed on the woman and she regained a pulse.

Due to storm activity, air transport was not available and the victims were transported by ground to the Flagstaff Medical Center.

The woman is currently in critical condition at a burn center in Phoenix.

At least two other people suffered "lightning splash injuries" and were treated at the Grand Canyon Clinic.

"The lightning strike is a reminder that monsoon season brings not only rain, but dangerous and potentially life-threatening lightning during thunderstorms," officials said on Wednesday. "Serious injuries and fatalities have occurred at Grand Canyon National Park as a result of lightning strikes. Visitors to the park are reminded that if the sound of thunder follows a lightning flash within 30 seconds or less, they should seek shelter in a building or vehicle or proceed to the nearest bus stop to get on a park shuttle."

Officials say to stay clear of the rim and metal fencing if you're not around anywhere to take shelter in.

Kaitlyn Thomas with NPS says, "It was definitely a scary moment for everyone involved."

Jessica Walker was at Mather Point with her family when the storm hit. She said it was sunny with some overcast and in a matter of minutes, the storm rolled in.

She and her family immediately went inside for shelter.

"It rained harder than I have ever seen it rain, anywhere really," she said. "There was lightning literally across the sidewalk from where we were standing outside."

Adding, "It was very loud and crazy. I have never experienced lightning like that." 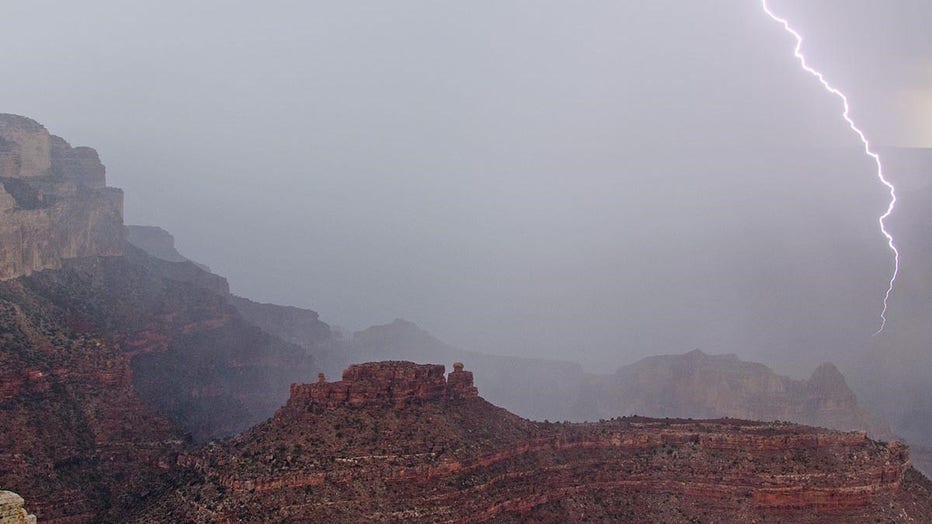