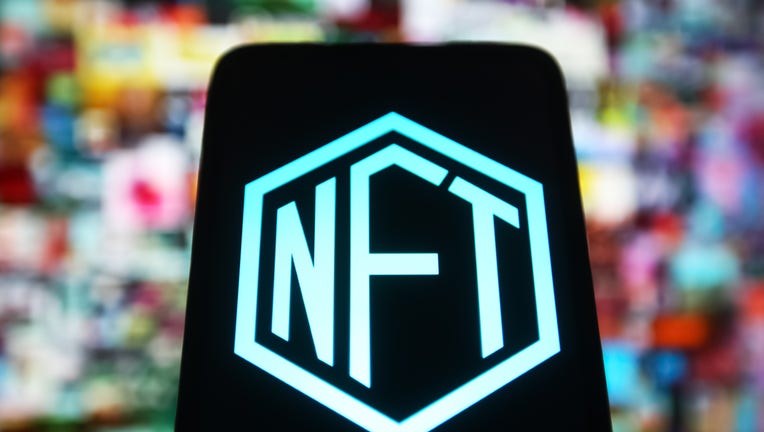 In this photo illustration, a NFT sign is seen on a smartphone. (Photo Illustration by Pavlo Gonchar/SOPA Images/LightRocket via Getty Images)

PHOENIX - There's been a lot of talk about NFTs lately on the internet, and many people may have questions about what it stands for.

Here's a primer for those who want to know more.

So, what are NFTs?

According to the Merriam-Webster Dictionary, NFTs, or non-fungible tokens, are unique digital ID that cannot be copied or substituted.

The tokens, according to the dictionary, are recorded in a blockchain, which is a digital paper trail of sorts that is stored on computers across the internet. It is used to certify authenticity and ownership.

Non-fungible, according to the Amazon AWS website, is a term that can be used to describe things that are valued differently, based on their unique attributes and scarcity.

"One such example of this is baseball cards, where each individual baseball card is assigned a unique value depending on its attributes such as edition number, design, player, and rarity," read a portion of the website.

This stands in opposite to things that are fungible, as people can exchange a fungible asset for another, knowing the value is exactly the same.

"A practical example of a fungible asset is the U.S. Dollar, where you can trade one dollar for another knowing the value is exactly the same regardless of which dollar you have," read a portion of the website.

NFTs, according to a 2021 article on NFTs published by the Associated Press, is being used to solve a problem for digital collectibles: how to claim ownership of something that can be easily and endlessly duplicated.

How are they created?

The Amazon AWS website states that an NFT is created by an artist, creator, or license-holder via a process called minting.

Defined in simple terms, minting is a technical process where the token is defined. Details of the token are then sent to the blockchain before the token is created and assigned to an owner.

According to the AP, some NFT issuers give full copyrights to the buyer, while others do not. The same article also listed a real-world parallel to such an option.

"Just like you can take a photo of the Mona Lisa in the Louvre or buy a print from the museum gift shop. But that doesn’t mean you own those original artworks," read a portion of the AP article.

What are NFTs used for?

According to the Amazon AWS website, NFTs can be created to represent virtually any asset. However, the website Ethereum.org states that tokenization of physical items is not yet as developed as their digital counterparts.

"An NFT is minted from digital objects as a representation of digital or non-digital assets," read Ethereum.org.

"The most common NFT assets are digital art, digital collectible items, pieces of content like video or audio, and event tickets," read a portion of the Amazon AWS website.

How are they bought and sold?

NFT marketplaces exist on the internet, some of which conduct sales with cryptocurrencies. Even the Associated Press has launched its own NFT marketplace.

Ethereum.org also states that while it is still in the experimental stages, NFT creators can also create shares of an NFT, meaning people can own just a part of an NFT.

What gives NFTs their value?

According to the website ECommerce Platforms, the value of an NFT depends on the type of asset it represents.

"Suppose that the asset is a digital piece of content that doesn’t come with a pricing label, then its value is purely speculative. In essence, its value depends on the market, supply and demand," read a portion of the website.

The website states that situation where the NFT represents a content that does not come with a pricing label, the value is determined on market sentiment, and what potential buyers are willing to pay for it.

"This means that the seller can set the price of their specific artwork to any level they want. Whether the buyer will pay that cost to gain ownership of the asset is a completely different thing altogether," read a portion of the website.

Another factor in the value of NFTs is scarcity. The AP article states that one purpose for NFTs is that they can be used to trace an object’s digital provenance, allowing a select few to prove ownership. Thus, in a broader sense, NFTs provides a way to create artificial scarcity, so that people can sell something for higher prices, because supply is limited.

How much are people willing to pay for NFTs?

Much like art, NFTs can fetch high prices at times.

In March 2021, auction house Christie's sold an NFT that was created by an artist called Beeple for just over $69 million. Meanwhile, an NFT of the first tweet made by Twitter founder Jack Dorsey sold in 2021 for $2.9 million.

According to a December 2021 article by The Guardian, the global market for NFTs hit $22 billion in 2021.

What are some of the problems, risks associated with NFTs?

According to the Twitter for OpenSea, which describes itself as 'the world's first and largest NFT marketplace,' they have seen a misuse of their free minting tool.

"Over 80% of the items created with this tool were plagiarized works, fake collections, and spam," read a tweet made on Jan. 27.

The marketplace was recently embroiled in controversy over their decision to limit the use of their free minting tool. The decision has since been reversed.

Plagiarism of artwork for the minting of NFTs is also considered to be a problem. An artist named Liam Sharp tweeted in December 2021 that he had to shut down his online gallery, as people keep stealing his artwork and make NFTs out of it.

Incidents of scamming have also been seen when it comes to NFTs. In October 2021, news website Vice reported on an NFT project where the developers suddenly vanished, along with millions of dollars in cryptocurrency that derived from the initial public sale of those NFTs.

Some, like a digital artist interviewed by the Associated Press in 2021, believe the NFT market is a bubble that could eventually pop.

"I’m still mystified by the prices and how high they are," Anne Spalter said. "I think there will be a correction."