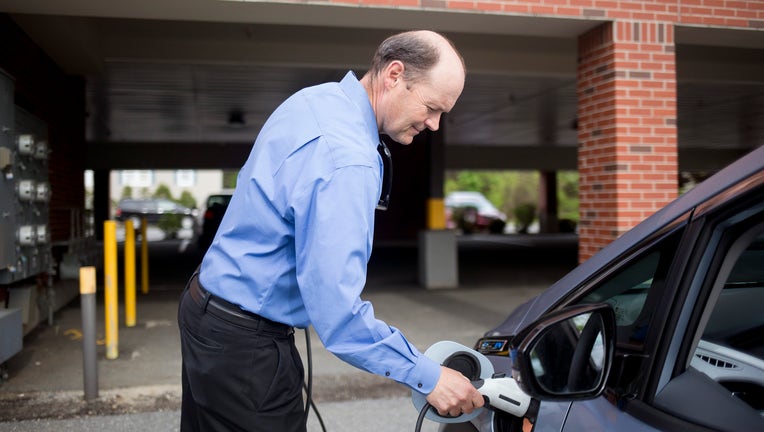 PHOENIX - As gas prices rose across the country earlier in the year amid Russia's invasion of Ukraine, more people were showing interest in electric cars as an answer to higher gas prices.

According to the website MarketWatch, searches for new and used EVs jumped 112% from Feb. 24 to March 8 on cars.com, at around the same time as the Russian invasion began.

Here's what you should know about electric cars, as well as some of the terms that are unique to this category of cars.

What is EV, and how it is different from hybrids and plug-in hybrids?

According to the Alternative Fuels Data Center, which is part of the U.S. Department of Energy, EVs, also referred to as Battery Electric Vehicles (BEVs), are cars that have an electric motor instead of the internal combustion engine that powers many of the cars that are currently on the road.

"The vehicle uses a large traction battery pack to power the electric motor," a part of the description reads.

An EV is different from a Plug-In hybrid in that while both have batteries to power the motor, a plug-in hybrid also has an internal combustion engine to power the car.

"The vehicle typically runs on electric power until the battery is nearly depleted, and then the car automatically switches over to use the ICE," a part of the description for plug-in hybrids read.

Hybrids, meanwhile, are more similar to the traditional car, while featuring a battery that can, in some models, power the car for short distances on electricity alone.

How do you ‘fuel up’ an electric car?

It probably goes without saying, but your neighborhood gas station will be of no use to an electric car.

An electric car needs a special type of fueling station to power it back up. The good news is if a person has right equipment, they can charge a car at their home.

However, unlike gassing up a car, charging a car can take longer or shorter amounts of time, depending on charging speed. Different cars also use different plugs.

Don't worry! We will break it down for you here.

As far as charging speed is concerned, part of it depends on which charger an EV owner decides to use. There are three kinds of chargers: Level 1, Level 2, and DC Fast Charging.

Level 1 charging, according to cars.com, uses that standard home outlet that we use every day, for a variety of reasons, to charge up a car. It typically gives you three to five miles of range for every hour it is connected to the car. In some car models, this could mean taking a long time to charge up a car.

Cars.com calls Level 2 charging the fastest means of charging an EV at home, as it uses outlets normally reserved for large appliances to charge up a car. According to the Alternative Fuels Data Center, Level 2 charging equipments can operate at levels up to 80 amps, but most Level 2 equipment installed in homes operate at a lower power, at up to 30 amps, and the charging unit will require a dedicated circuit.

In addition, each EV has a maximum charging rate that is based on the level it can convert Alternating Current (AC) into Direct Current (DC), which can also affect the charging speed.

For safety reasons, these are issues you should talk with an electrician about.

However, it has been noted by cars.com that car manufacturers have included warnings in EV user manuals that using DC fast charging frequently will diminish the battery pack's longevity. According to the website of EV charger company Chargepoint, fast charging can create heat that will stress the battery more.

Not all EV car models use the same car-side plug to charge up the EV.

According to the website EnelX, there are nine plug standards around the world, four of which can be found in North America: J1772, CCS, CHADeMo, and Tesla.

J1772 plugs are used in Level 1 and Level 2 charging, while CCS plugs, which is a J1772 charger with two more pins added below, are used for DC fast charging.

CHADeMo, according to EnelX, is a Japanese-developed plug standard that is widely used in Japan, but is only used by Nissan LEAF and Mitsubishi Outlander plug-in hybrids in the U.S.

Tesla cars, meanwhile, use a plug that is specific to that brand alone. The same plug is used for all levels of charging.

Where would I go to charge up my EV?

Besides your home, there are public chargers for EV drivers.

Tesla EV owners can go stations specifically set up by Tesla for the charging of their brand of vehicles. These stations can only be used by Tesla cars.

Owners of other EV brands, meanwhile, can go to stations that have plugs that fit their cars. Some charging stations charge a fee, while others are free. A website called PlugShare features a map with information on where the nearest public EV chargers are located, as well as whether it's free to use the charger or not. There are also other websites that provide similar information.

Some car manufacturers are also giving new EV car buyers free charging deals. Those looking at buying an EV should consult with a car dealership for more details.

Are there federal tax credits for those buying an EV?

Yes, but there are some caveats.

According to the U.S. Department of Energy's Office of Energy Efficiency and Renewable Energy, some new EVs, as well as new plug-in hybrids, qualify for a federal tax credit up to $7,500.

Previously, EVs made by companies that have built 200,000 eligible cars were not eligible for the tax credit: once the company reached the cap, the tax credit would have been phased out for the company's car offerings over the course of a year, until it reaches zero. General Motors, Tesla and Toyota were affected by this, with Toyota reaching the cap largely by selling plug-in gas-electric hybrid vehicle.

In August 2022, Congress passed a bill known as the Inflation Reduction Act, which was later signed into law by President Joe Biden. The bill includes a provision that extends the $7,500 tax credit to 2032, as well as getting rid of the cap for the tax credit, which (as mentioned above) has affected cars made by General Motors, Tesla and Toyota.

The bill also provides $4,000 for those buying used EVs.

However, according to the Department of Energy's Office of Energy Efficiency and Renewable Energy, EVs purchased between Aug. 16 and Dec. 31, 2022 must have final assembly completed in North America in order for the car to be eligible for the new tax credit, based on preliminary guidance from IRS.

Officials within the auto industry spoke out on the strict requirements for EV tax credits in the Inflation Reduction Act, such as the car having a battery that is built in North America, with minerals mined or recycled on the North American continent. They say many current car models will not be able to take advantage of the new tax credit.

"The $7,500 credit might exist on paper, but no vehicles will qualify for this purchase over the next few years," said Alliance of Automotive Innovation CEO John Bozzella, in a statement.

The rules are set to get tougher over time.

What about incentives for buying an EV on a state or local level?

There are state or local incentives for those who purchase an EV. They range from car purchase rebates, reduced car registration fee, use of carpool lanes on freeways, and discounts on buying a Level 2 charger for at-home charging.

You can check with your relevant state and local government agencies, as well as your utility provider, for more details on any applicable incentives.

According to greencars.com, EV batteries will, over time, slowly lose the amount of energy they can store, in a process called battery degradation.

However, the website notes that it is not uncommon for modern EV batteries to last more than 10 years, and that the average EV owner will sell their car long before they need to replace the battery pack.

What would I need to do to keep that battery in good shape?

Greencars.com states that people should avoid using DC fast charging as their main way to charge up an EV's battery, keep their car charged to between 60% to 80%, and avoid extreme temperatures over long periods of time.