Suns fans confident ahead of Game 5 against Mavericks

With the series tied at two each on May 10, Suns fans were confident of victory as their team took on and later defeat the Dallas Mavericks in Downtown Phoenix. FOX 10's Marissa Sarbak reports.

PHOENIX - The top-seeded Phoenix Suns looked much more like their old selves on May 10.

All-Star guard Devin Booker said a little time in front of the TV with NBA Coach of the Year Monty Williams did wonders.

"We study film," Booker said. "Coach is coming in with adjustments, we make them and we follow them."

Booker scored 28 points, Deandre Ayton added 20 and the Suns pulled away for a lopsided 110-80 win over the Dallas Mavericks to earn a 3-2 lead in the Western Conference semifinals.

The Suns bounced back after dropping the previous two games and can win the series in Game 6 on Thursday in Dallas. It won’t be easy: The home team has won the first five games.

The Suns used a huge third quarter to turn a tight game into a comfortable win. Phoenix opened up the second half on an 11-4 run, highlighted by Booker’s two 3-pointers, for a 61-50 lead.

Mavs coach Jason Kidd called for a timeout, but it did little to stop the onslaught. The Suns led 82-60 going into the fourth with Booker pouring in 12 points during the third.

While the Suns were finally finding some offensive continuity, the Mavs completely lost theirs, scoring just four points in the first six minutes of the third. At times, the Dallas offense regressed to mostly watching Luka Doncic try and work magic, but he couldn’t do it all by himself.

The Mavs had 12 turnovers during the third quarter.

"The defense tonight — that’s the backbone of our program," said Williams, who was announced as the Coach of the Year on Monday.

Doncic finished with 28 points and 11 rebounds, but acknowledged that the offense bogged down at times. Jalen Brunson added 21 points. The Mavs shot just 38% from the field.

"The one thing we didn’t do great today was our pace," Doncic said. "In the last two games, our pace was very good. I think they are one of the best defensive teams, if not the best, in the NBA. They held us to 80. That’s pretty impressive. We’ve got to move the ball and have better pace — faster."

The Suns took a hard-fought 49-46 lead into halftime. Booker scored 16 points on 7-of-11 shooting from the field. Doncic countered with 18 points, though it was a little less efficient after making 7 of 16 shots.

The Mavericks led for a majority of the first half before Booker’s baseline jam tied it at 40-all with 3:47 before halftime. Mikal Bridges had a nifty steal and then scored on a fast-break layup for a 44-42 lead.

The 25-year-old is one of just 18 players in NBA history with at least 800 points in his first 30 postseason games.

Phoenix’s Bismack Biyombo and Dallas’ Marquese Chriss were both ejected in the final seconds after exchanging words. TV cameras showed security officials going into the tunnel to make sure the players couldn’t get at each other after leaving the court.

Biyombo played 21 solid minutes for the Suns, adding seven points and six rebounds. Chriss — who was drafted No. 8 overall by the Suns in 2016 and spent two seasons with the franchise — had two points and two rebounds.

Suns point guard Chris Paul came to the arena wearing a shirt that had Phoenix Mercury star Brittney Griner’s picture on the front and her name on the back.

Griner — a seven-time WNBA All-Star — was detained in Russia on Feb. 17 after authorities at the Moscow airport said they found vape cartridges that allegedly contained oil derived from cannabis in her luggage, which could carry a maximum penalty of 10 years in prison. The Biden administration determined Griner is being wrongfully detained. A hearing in a Russian court is set for May 19.

The WNBA and U.S. officials have worked toward Griner’s release, but have yet to make any headway with the Russian government.

"This isn’t just a NBA or WNBA thing, I think everyone just wants her home," Paul said.

Mavericks: Doncic made his first 3-point attempt in Game 5 after a 1-of-10 performance from long range in Game 4. ... F Dorian Finney-Smith was called for a flagrant 1 after a hard foul on Booker in the third quarter.

Suns: F Torrey Craig (right elbow contusion) was available to play. ... Ayton was called for an offensive foul on the first possession of the game. He missed a big chunk of the first half after picking up two quick fouls. ... Williams dropped backup G Cameron Payne from the playing rotation after two ineffective games in Dallas. ... The Suns hosted a sellout crowd for a 32nd consecutive game. 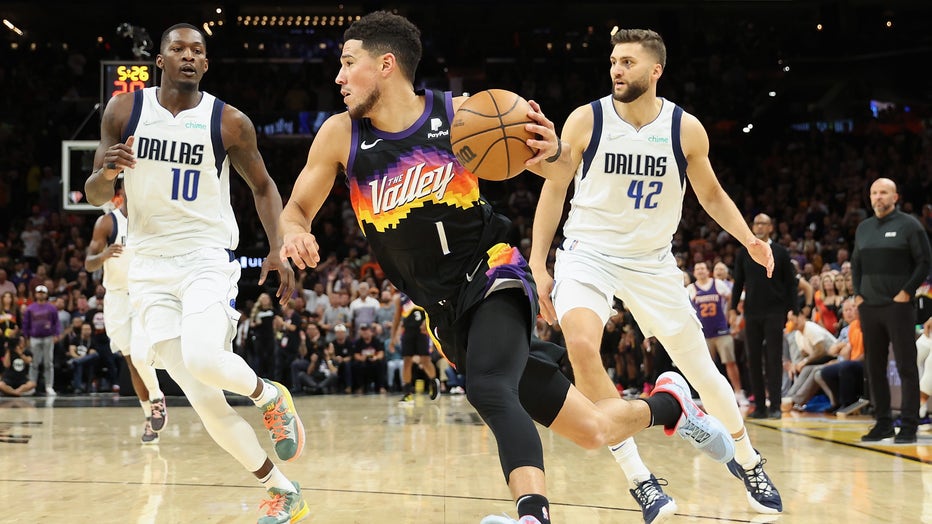 PHOENIX, ARIZONA - MAY 10: Devin Booker #1 of the Phoenix Suns drives the ball past Dorian Finney-Smith #10 and Maxi Kleber #42 of the Dallas Mavericks during the second half of Game Five of the Western Conference Second Round NBA Playoffs at Footpri