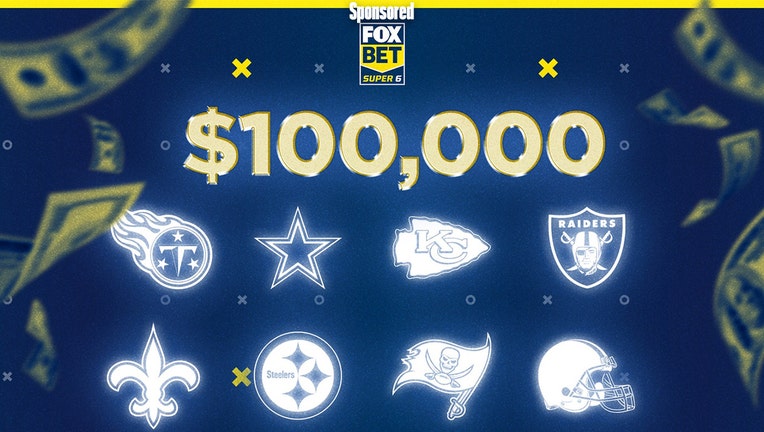 Can you believe we're halfway through the 2021 NFL regular season? It feels like just yesterday we were lining up our Super Bowl futures and win total over/unders. Now, we're sifting through nine weeks of data to figure out if the Arizona Cardinals are for real (yes, absolutely) and whether the Kansas City Chiefs can turn things around (good luck with that).

And as Week 10 looms, you have a chance to win big yourself with FOX Bet Super 6! This week, FOX Bet is giving away $100,000 of Terry Bradshaw's money absolutely for free. All you have to do is download the FOX Bet Super 6 app, enter the NFL Sunday Challenge and make your picks on six games from Sunday's Week 10 slate. If you're right, you'll have a shot at the grand prize!

To help you get to the pay window, here are my thoughts on this week's FOX Bet Super 6 games.

The Cowboys were in the mix for home field advantage in the NFC playoffs before a stunning no-show at home against the Broncos. They trailed 30-0 with 12 minutes left and had just five first downs and 122 yards of total offense.

Can Atlanta employ the same cover-2 defense with tight man coverage underneath? Atlanta cornerback AJ Terrell is having an All-Pro season, grading out as the 4th best cornerback in the NFL, per Pro Football Focus. But the pass rush is non-existent (32nd in the NFL in pressure rate) and so Dak Prescott should have ample time in the pocket to pick apart a Falcons defense that ranks 25th in opponent QB rating. Left tackle Tyron Smith is expected back for the Cowboys, which would be huge considering his backup, Terence Steele, permitted nine (!) pressures in 46 pass blocking plays vs Atlanta.

There will certainly be a lot of points - last year’s meeting ended 40-39, with the Cowboys winning - and the over has already been on the move. This is a sneaky-big game for Dallas, which faces two teams from the AFC West next, and then a difficult game against the Saints on the road before ending the season with four games against divisional rivals - plus the Cardinals. If the Cowboys lose this, it begins a slippery slope to possibly not winning the division.

The Titans have won four straight, and all as underdogs - at home vs the Bills and Chiefs, then on the road vs the Colts and Rams. That’s as brutal - and impressive - a four game stretch as you’ll find all season. Now they’re favorites against the Saints, who come in off a loss to the Falcons.

The Saints were down 24-6 to start the 4th quarter before nearly winning with a furious rally. What we learned is that Trevor Siemian is not going to throw the ball down the field, as evidenced by his seven pass attempts at or behind the line of scrimmage, to four attempts beyond 20 yards. He wasn’t helped by his pass-catchers - five drops in the first half alone - but none of this bodes well against a vastly improved Tennessee defense which refused to give up the big play vs the Rams in forcing Matt Stafford into his worst game of the season.

The Titans dominated the line of scrimmage vs the Rams, sacking Stafford five times, including three by Jeffery Simmons. One has to wonder how long the Titans defense can keep this up, because we know the Derrick Henry-less offense struggled against the Rams (195 yards of offense, 3.8 ypp), and that’s likely to continue vs a stingy defensive unit like the Saints. They have 13 sacks in the last six games, and have created 11 turnovers in that same time frame.

Two teams coming in off a bye, but one of them might be the best team in the NFL (Tampa), and the other is headed toward a rebuild, just one year after making the playoffs (Washington).

Last year, the Bucs used the bye week as a springboard to eight straight wins and a Super Bowl crown. Your inclination is to take Tampa, but the Bucs have been sloppy and inconsistent on the road, losing to the Rams and Saints and not covering versus the Patriots and Eagles. At 0-4 against the spread on the road, it’s difficult to back Tampa here, despite all of Washington’s struggles.

Despite the 2-6 mark, Washington’s defense showed signs of improvement before the bye, holding the Packers to 5.7 yards per play and Broncos to 5.4 yards per play. If Washington was able to get healthy on the offensive line and at the skill positions during the bye, there’s a case for WFT to cover the number while still using the Bucs in a teaser leg.

Pick: Buccaneers to win by 5-6 points

The Lions are the league’s only winless team, and like a fickle infant who decides on a whim whether or not to cooperate for dinner, it’s anyone’s guess if Detroit shows up. They fought hard and nearly beat the Ravens at home and the Vikings on the road; they completely no-showed and got smoked at home by the Bengals and Eagles. Toss in a major scare (and cover!) in LA vs the Rams, and there’s no telling which Lions team we’re going to get.

But this much we know: Inclement weather is expected, and that’s never good for Jared Goff. As the Detroit offensive line keeps getting crushed by injuries, Goff has one TD pass in the past four games; he’s been sacked 12 times and has thrown four interceptions in that stretch.

The Steelers will be on short rest after Monday Night Football, but that hasn’t mattered all season — teams that win on MNF are 8-0 straight up. The point spread is the great equalizer, and Mike Tomlin thrives as an underdog (41-20 ATS). But the Steelers have yet to cover the spread as favorites this season (0-4 ATS).

Pick: Steelers to win by 7-9 points

I had loved the Browns in this spot until Tuesday morning, when Nick Chubb tested positive for COVID-19, and his status for Sunday is in doubt. He’s vaccinated but needs two negative tests to play, and this season, I can’t recall one player in his situation who was able to suit up.

That’s a massive blow to the Browns, but this could be a surprise Baker Mayfield game. Browns passing game coordinator Chad O’Shea spent a decade in New England and knows Bill Belichick’s tendencies. That could be a small edge for the Browns, who will take money in this spot against a good-but-not-great Patriots team. New England’s defense has bloated stats against Sam Darnold, Mike White/Josh Johnson, Davis Mills and Zach Wilson. Their other win was against Justin Herbert, who made one massive mistake — a fourth quarter pick-six — that handed the Patriots the game.

But this is really about the Browns defense, which is finally healthy. They’ve confounded Kirk Cousins and Joe Burrow this season, and Mac Jones could be in some trouble. The Patriots have used him as a game manager, and the rookie has struggled to play from behind against quality opponents (Tampa, New Orleans).

The past two games in this series have been thrillers, with the Chiefs escaping by four last year on the road and Las Vegas winning by eight in Kansas City. This line is curious, because right now, the Chiefs aren’t a good football team, as evidenced by every top-tier QB in the league shredding their defense (last in the NFL in opponent yards per play, 6.3). Their wins this season, meanwhile, have come against Jordan Love (first career start), Daniel Jones, Taylor Heinicke, Jalen Hurts, and a comeback in the opener against Baker Mayfield. The "blitz every pass play!" strategy worked against Jordan Love, but try that against Derek Carr and he’ll pick apart one of the worst secondaries in the NFL.

Worse yet, the offense has struggled against the 2-high safety look, with Patrick Mahomes refusing to take what the defense gives him; he’s about to set a career-high in turnovers. His 7.0 yards per attempt is a career low — by over a yard. Everyone keeps waiting for the Chiefs to flip the switch and become the team of the last three seasons … but that can be a costly endeavor.

The sooner everyone realizes KC just isn’t good anymore, the better. I learned that lesson against the Titans, and I’m done with KC.

Pick: Raiders to win by 3-4 points

Saints to win by 3-4 points

Buccaneers to win by 5-6 points

Steelers to win by 7-9 points

Browns to win by 1-2 points

Raiders to win by 3-4 points

Play FOX Bet Super 6 every week for your chance to win thousands of dollars, including a $10,000 prize on the Big Noon Kickoff game of the week, the weekly College Football Saturday contest and, of course, the Sunday NFL Challenge. Just download the FOX Bet Super 6 app and make your picks today!