GLENDALE, Ariz. - The Arizona Cardinals won a bunch of games early last season and looked like one of the NFL’s best teams. Then they lost a bunch, got embarrassed in the playoffs, and have spent a big chunk of the offseason trying to figure out what went wrong.

But they never forgot what it felt like to be among the league’s elite.

Fourth-year coach Kliff Kingsbury believes that will serve his team well this fall.

"Watching us compete, day in and day out, I think they understand what they were for the majority of last season," Cardinals coach Kliff Kingsbury said. "They could have competed with anyone. All of us — coaches and players — didn’t close it out like we could have.

"But we’re playing with a lot more confidence."

It’s a crucial season for the Cardinals, who recently invested in quarterback Kyler Murray with a long-term deal that pays $230.5 million and keeps him in the desert through 2028. The former No. 1 overall pick has made the Pro Bowl the past two seasons and was the NFL’s Offensive Rookie of the Year in 2019.

It hasn’t been the smoothest camp for Murray. He didn’t have much time to celebrate his new contract before his work ethic was called into question after an "independent study" addendum was discovered in his contract. It was eventually removed.

He also missed nearly a week with COVID-19, though the quarterback says he’s bounced back quickly.

"I love this game," Murray said. "I don’t take it for granted. My job is to come here and win games and I think we’ve got a great opportunity this year."

The Cardinals have improved in each of the first three seasons that the Murray-Kingsbury combo has been in the desert. They were 11-6 last season — making the playoffs for the first time since 2015 — and another jump in the standings might prove to be the toughest.

There are already some obstacles. The biggest might be that three-time All-Pro receiver DeAndre Hopkins will miss the season’s first six games after violating the NFL’s policy on performance-enhancing drugs.

But there are also positives. Murray is entering what should be his prime years, running back James Conner is coming off a Pro Bowl season, the offensive line is full of veterans and the defense has impact players like veteran J.J. Watt, safety Budda Baker and linebacker Markus Golden.

"The competition is through the roof," Murray said.

The Cardinals are trying to make up for the loss of linebacker Chandler Jones, who signed with the Las Vegas Raiders during the offseason after having 71 1/2 sacks over six seasons in Arizona.

A healthy season from Watt would be a good first step toward making that happen.

The three-time AP Defensive Player of the Year might not be the player he once was, but the 33-year-old was still a handful for opposing blockers during the first half of last year. Watt started the first seven games before a shoulder injury knocked him out for the rest of the regular season.

If Watt is relatively healthy for 17 games this season, it would be a huge boost. That hasn’t happened often for him in recent years: Four of his past six seasons have been interrupted by substantial injuries.

Conner had the best season of his career last year, running for 752 yards and 15 touchdowns. He also proved his worth in the passing game, catching 37 balls for 375 yards and three touchdowns.

He formed a great one-two punch with Chase Edmonds last season, but Edmonds left for Miami during free agency.

That likely means an even bigger load for Conner, who says he can top last season’s 18-touchdown performance.

The Cardinals’ defensive fortunes this year might hinge of the development of two young linebackers.

Arizona used back-to-back first round picks in 2020 and 2021 on Isaiah Simmons and Zaven Collins. Both have had good moments during their short careers, but haven’t quite become the cornerstones that the team has wanted.

This fall, they’ll get every opportunity to become stars.

The team loves Simmons’ versatility, playing him in a hybrid role that’s part linebacker and part safety. Collins is true middle linebacker, who at 6-foot-4 and 260 pounds still has the speed to handle the run or pass.

If you’re interested in Arizona’s progress this season, just turn on HBO on November 9.

That’ll be the day the Cardinals debut on "Hard Knocks In Season: The Arizona Cardinals." It’s the second year in a row that Hard Knocks has produced an in-season version of the show. Last year’s program featured the Indianapolis Colts. 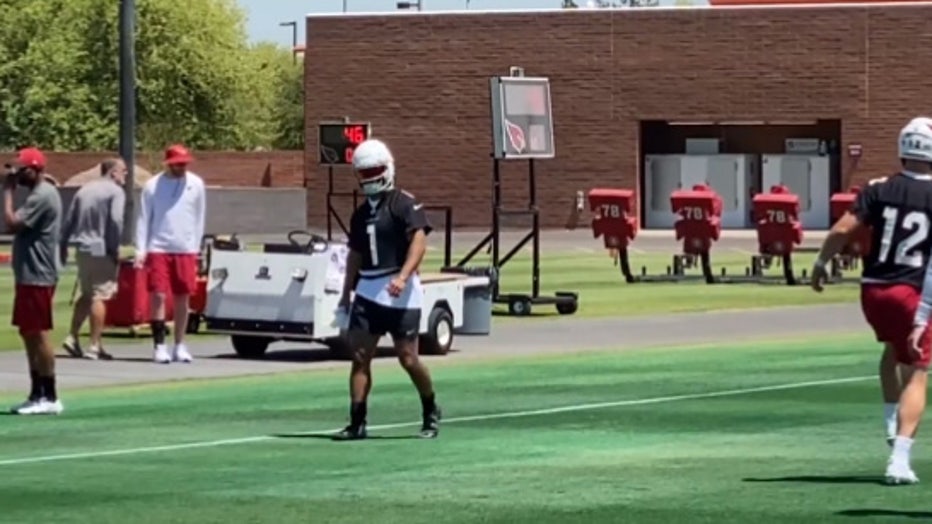