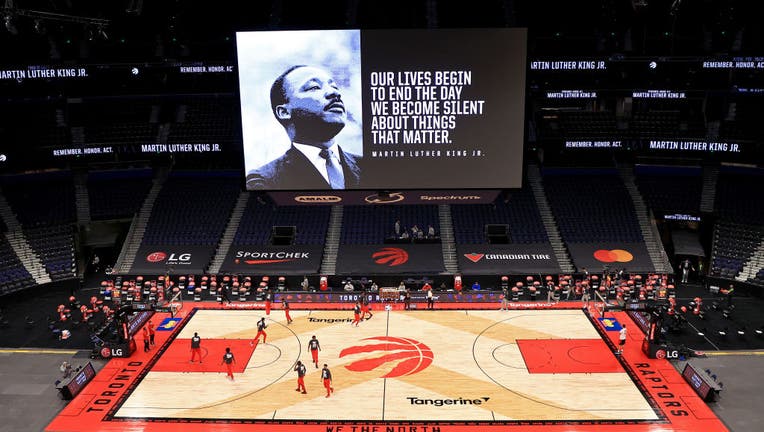 A general view during a game between the Toronto Raptors and the Dallas Mavericks celebrating Martin Luther King Day at Amalie Arena on January 18, 2021. (Photo by Mike Ehrmann/Getty Images)

WASHINGTON - The National Basketball Association will celebrate Martin Luther King Jr. Day Monday with games and celebrations commemorating the life and legacy of the civil rights icon and Nobel Peace Prize winner, who dedicated his life to achieving racial equality.  King would have celebrated his 93rd birthday today.

Twelve NBA games are scheduled Monday including the traditional home games in King’s birthplace of Atlanta and in Memphis, where he was killed at the age of 39. The nationally televised games are listed below.

Some teams are also taking part in King celebrations in other ways; 10 teams are planning youth events in their cities as part of the "Team Up For Change" initiative that focuses on "uniting, inspiring and activating around a shared commitment and call for racial equality and social justice."

The Washington Wizards held a roundtable discussion last week on how King still impacts the push for social change — and Wizards forward Daniel Gafford said it's important for even pro athletes to find time to help their communities, according to the Associated Press.

NBA teams have been paying tribute to King in many ways in recent days. Players have been warming up in shirts bearing the message "Now is the time to make justice a reality for all," a nod to a line he used in his famous "I Have A Dream" speech in 1963.