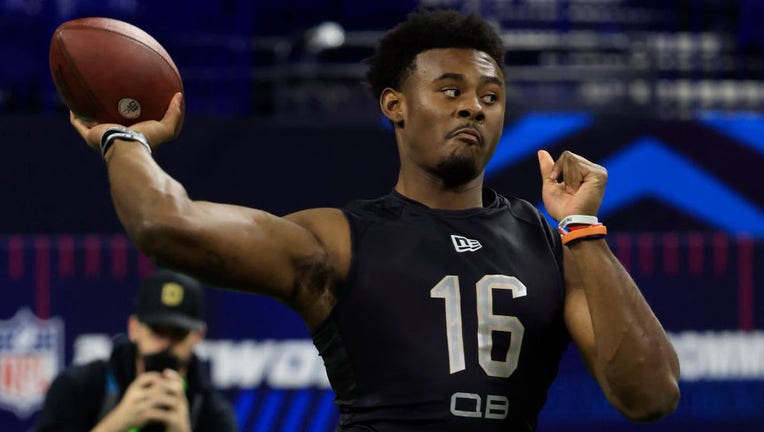 WASHINGTON - NFL quarterback prospect Malik Willis is rising up team draft boards based on his talent and athleticism. But the former Liberty University signal-caller is garnering more attention for what he recently did off the field.

Following his impressive workout at the 2022 NFL scouting combine, Willis was captured on a March 3 video, posted by Twitter user Ryan Lacey, giving some clothing from his bag to a homeless woman outside the Indianapolis Convention Center, the site of the annual NFL event.

Lacey in the trending social media wrote, "Was having lunch yesterday and saw one of the Combine guys helping out someone on some hard times…@malikwillis being great even when nobody is watching. How can you not be a fan of this guy?"

Willis, an Atlanta native, explained during an NFL Network broadcast last week why he helped the woman. "I walked past her on the way to the Nike suite and I chopped it up with them and I walked out with a suitcase and whatnot. And I felt bad because I saw her son. It was a pregnant lady and she was homeless."

Willis continued: "And I was just like, ‘Shoot, I don’t have no money, but I can give you a couple of shirts.'" He didn't know anybody was watching his spontaneous act of kindness.

"I just felt like I had to do that," he said. "I mean, I'm at a position right now where I'm not worried about much of anything except getting better. So, if I can help her out any way, I felt like I had to," Willis concluded.

Willis, a three-star prep prospect, initially went to Auburn University, but later decided to transfer to Liberty University in Virginia in 2019.

But last year, he saw a slight dip in his production. Willis threw for 1,105 yards and 11 touchdowns, no interceptions, and rushed for 418 yards and six touchdowns in Liberty’s first five games. But over the final eight contests, he threw 12 picks, including three three-interception games.

Willis is considered one of the top quarterback prospects in this year’s NFL draft with many analysts and scouts projecting him to be selected in the first round.

FOX5 Atlanta and The Associated Press contributed to this story. This story was reported from Washington, D.C.