The US Centers for Disease Control and Prevention updated its mask guidance on Tuesday to recommend that people who are fully vaccinated against COVID-19 resume wearing masks indoors in parts of the country with high levels of the virus. The public health agency also advised everyone in K-12 schools to wear masks regardless of vaccination status.

WASHINGTON - New evidence shows the delta variant is as contagious as chickenpox and may be more dangerous than previous strains of the virus, according to internal documents from the Centers for Disease Control and Prevention.

The documents, first reported Thursday by The Washington Post and obtained by several news outlets, appeared to be talking points for CDC staff to use in explaining the dangers of the delta variant and "breakthrough″ infections that can occur after vaccination. A CDC spokesperson confirmed the authenticity of the documents to FOX Television Stations but declined further comment.

Under communications, officials were urged to "acknowledge the war has changed."

Recommending masks for everyone and requiring vaccines for doctors and other health workers are among measures the CDC is considering, according to the documents.

The documents also point out that the delta variant, first detected in India, causes infections that are more contagious than the common cold, flu, smallpox and Ebola virus, and is as infectious as highly contagious chickenpox.

In recommending that vaccinated people resume wearing masks indoors in virus hot spots, the CDC this week said that new evidence shows that breakthrough infections may be as transmissible as those in unvaccinated people. They cited a large recent outbreak among vaccinated individuals in the Cape Cod town of Provincetown, Massachusetts, among others, for the change.

The study, detailed Friday in the CDC’s Morbidity and Mortality Weekly Report, found that nearly 75% of people who become infected in the outbreak had been fully vaccinated. 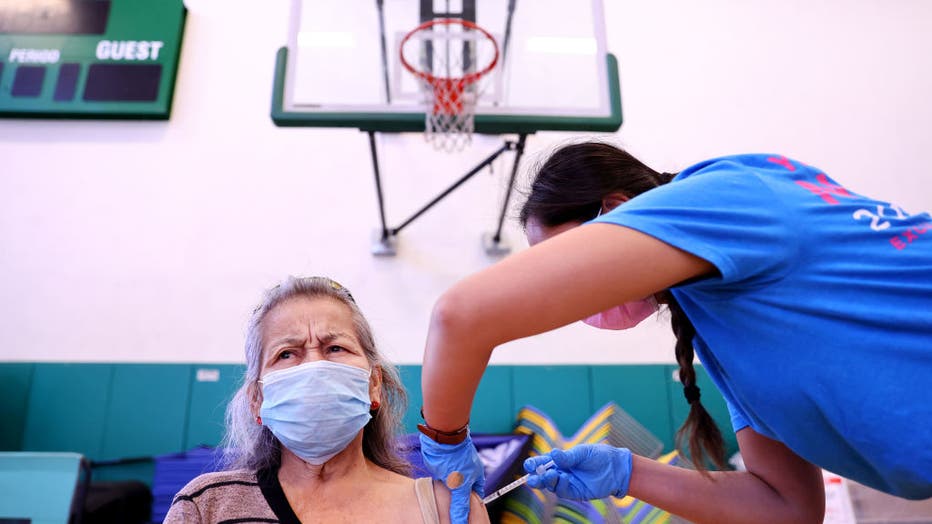 A nurse administers a dose of the Pfizer COVID-19 vaccine to Concepcion Witron at a three-day vaccination clinic at Providence Wilmington Wellness and Activity Center on July 29, 2021, in Wilmington, California. (Photo by Mario Tama/Getty Images)

As the documents note, COVID-19 vaccines are still highly effective at preventing serious illness and death. The CDC has always expected some breakthrough infections but has struggled with how to explain them to the public.

The internal documents also cite studies from Canada, Singapore and Scotland showing that the delta variant may pose a greater risk for hospitalization, intensive care treatment and death than the alpha variant, first detected in the United Kingdom.

Since January, people who became infected after vaccination make up an increasing portion of hospitalizations and in-hospital deaths among COVID-19 patients, according to the documents. That trend coincides with the spread of the delta variant.

But the CDC emphasizes that breakthrough infections are still uncommon.