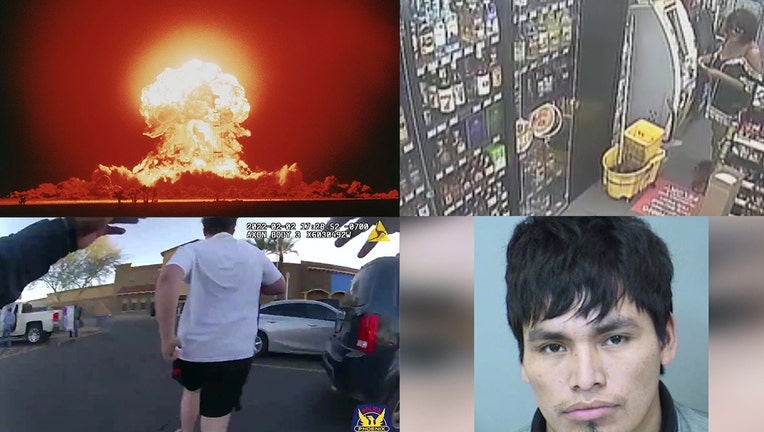 Photo collage: (Top left) A photo of a nuclear bomb explosion. (Photo by Lambert/Getty Images) (Top right) A woman is suspected of disguising herself and stealing from a Phoenix Circle K repeatedly. (Bottom left) A man was seen on body cam footage ru

From a foot chase that ended in a major drug, cash and gun seizure, to a man's involvement in allegedly killing three men and leaving their bodies in a vacant Phoenix lot, it's safe to say Phoenix had no shortage of crime stories. As for world news, the American government released information about how to handle a nuclear explosion as Russian forces threaten violence to any country if it gets involved in its invasion of Ukraine. These are our top stories from Feb. 27 to March 5.

1. Fentanyl, guns, cash seized following foot pursuit of man in Phoenix parking lot: Phoenix Police released a body cam video from Feb. 3 of an officer chasing a man on foot for a short period after he reportedly ran from a parked car with drugs. The video shows the man running from the officer near 63rd Avenue and Broadway Road. Once the officer catches up to him, he's brought to the ground and is arrested. 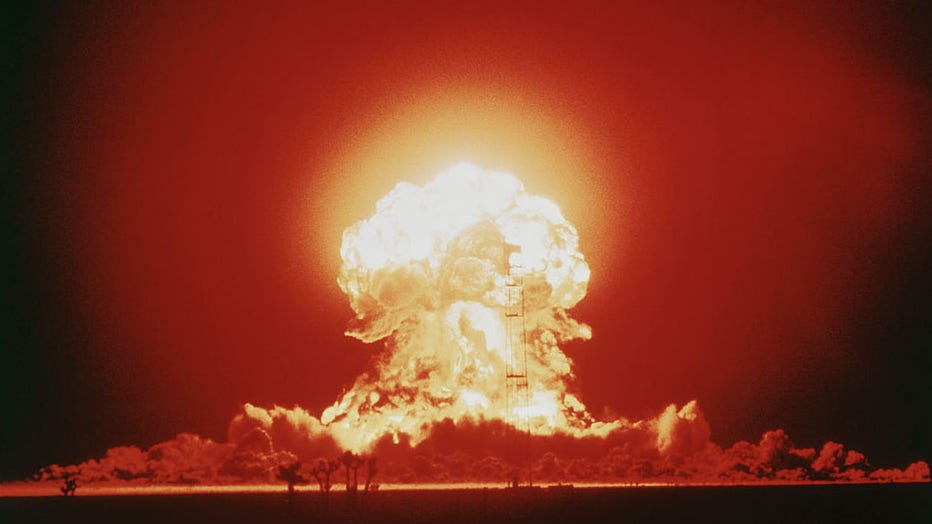 3. See a 'frozen' or upside down hummingbird during winter? It could be in a hibernation like state: With overnight temperatures still pretty chilly in the Phoenix area, hummingbirds are feeling the impact and a wildlife expert explains their seemingly strange reaction to the cold. "Can be a real surprise for people when they find hummingbirds seemingly frozen on the ground or in a tree," said Kathleen Scott with Liberty Wildlife.

See a 'frozen' or upside down hummingbird during winter? It could be in a hibernation like state

4. Teenager, 2 men found dead in vacant Phoenix lot; suspect arrested: Police say a suspect has been arrested after the bodies of three Mexican nationals were found in a vacant lot in Phoenix. According to Sgt. Philip Krynsky with Phoenix Police, officers responded to reports of an injured person just after 1:30 p.m. on Feb. 20 near 99th Avenue and Mobile Lane and found the remains of three victims "with obvious signs of trauma."

5. Suspect wanted in Phoenix McDonald's shooting that killed teen employee: Prince Nedd, 16, was killed in the shooting after he got into a fight with another person in the restroom. Police identified the suspect as 16-year-old Christopher Track, who fled the scene before officers arrived. Track and Nedd were co-workers at the McDonald's.

6. Woman wanted for stealing from north Phoenix Circle K multiple times while in disguise: A woman is wanted for stealing from the same convenience store in north Phoenix multiple times while disguising herself in different wigs, according to police. Surveillance video shows the woman wearing different wigs while stealing the same item from a liquor cabinet.

7. Arizona man gets 5 years in prison in restaurant fraud case: A Scottsdale businessman has been sentenced to five years in prison after pleading guilty to conspiracy and tax evasion charges in a scheme that federal authorities said defrauded victims that included property developers in country music-themed restaurant projects.

Arizona man gets 5 years in prison in restaurant fraud case

9. Tempe motorcyclist crashes into wall: Mother of 2 killed, driver critically injured: Police and loved ones say the passenger was Adrian Cochran, 29, a mother of two. Nearly a week after the crash, family, and friends released balloons in honor of Cochran. "She was open-minded, she always cared about other people, loved her kids, she was a great mother, a great friend, daughter," said her friend, Gabby Jacobs.

10. Proposed Arizona bill would allow older teens to have a say in custody when their parents divorce: The bill, HB2642, was passed overwhelmingly by members of the Arizona State House, and it is now in the State Senate. The bill is sponsored by Republican State Representative Shawnna Bolick, and under the bill, a child who is at least 14 years old and is "sufficiently mature so that the child can intelligently and voluntarily express a preference for one parent" will have the legal right to choose which parent they want to live with.