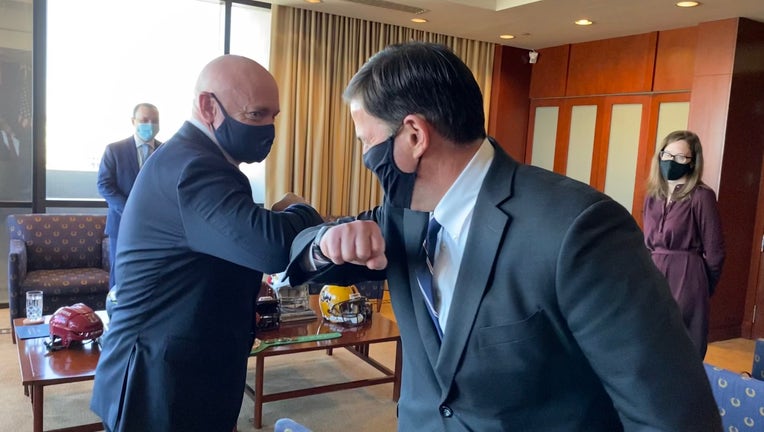 The discussion at Ducey’s office in Phoenix touched on distribution of a COVID-19 vaccine, dealing with the economic fallout from the pandemic, infrastructure and trade with Mexico, both men said afterward.

“We’re both looking forward to vaccinating a large majority of the population,” Kelly said in a brief interview with The Associated Press. “We really need that and we’re going to probably see the first vaccinations here in the state as early as December.”

Kelly said he’s concerned about polls showing much of the country doesn’t plan to get vaccinated, which would prevent the herd immunity necessary to keep the spread of the coronavirus in check.

Ducey and Kelly agreed that Congress needs to do more to sustain families that are struggling during the pandemic, Kelly said.

Kelly echoed calls from the mayors of Flagstaff, Phoenix, Tolleson and Tucson for Ducey to institute a statewide mask mandate in public places.

Mayors in Phoenix, Tolleson, Tucson and Flagstaff called for Gov. Doug Ducey to implement a statewide mask mandate during a news conference on Nov. 20.

“I think it’s a really strong message to have a governor say, ‘I want everybody to wear a mask and I’m going to require it and we’re going to enforce it,’” Kelly said.

Ducey said last week that he believes Arizona has achieved as much compliance with mask-wearing as it will get, adding that nearly everyone in the state lives in a jurisdiction with a local mask requirement.

Ducey’s office posted photos on Twitter showing the governor and his chief of staff, Daniel Scarpinato, meeting with Kelly and aide Tiernan Donohue. All were wearing masks when the photos were taken.

“There is no shortage of critical issues before our state and nation, and we’ll need both sides working together to really make a difference,” Ducey said in a statement.

Kelly defeated Republican Martha McSally, whom Ducey appointed to fill John McCain’s former Senate seat until the November election. Kelly will finish the last two years of McCain’s term and faces re-election in 2022. Kelly can be seated in the Senate after Arizona’s election results are formally certified on Monday.

Elected leaders in the last Arizona county to certify its results from the Nov. 3 election signed off on their tally Nov. 23, setting the stage for state leaders to formalize Democratic presidential candidate Joe Biden’s historic win in the Grand Canyon State.

Hobbs, who is a Democrat, says elected officials in Arizona should do more to make sure cooler heads prevail.

Organizers of a nonpartisan group calling for the recall say Gov. Ducey has been playing partisan politics to appease President Trump amid the pandemic.