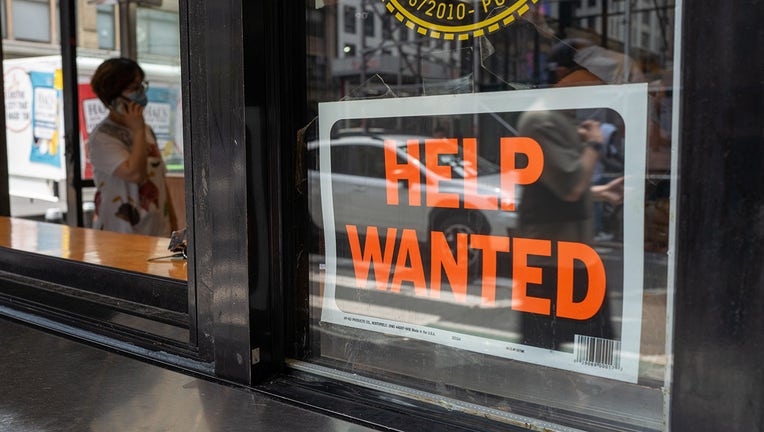 File: A "help wanted" sign is displayed in a window in Manhattan on July 28, 2022 in New York City. (Photo by Spencer Platt/Getty Images

Friday’s government report showed that hiring fell from 315,000 in August to the weakest monthly gain since April 2021. The unemployment rate dropped from 3.7% to 3.5%, matching a half-century low.

The Fed is hoping that a slower pace of hiring would eventually mean less pressure on employers to raise pay and pass those costs on to their customers through price increases — a recipe for high inflation. But September's job growth was likely too robust to satisfy the central bank's inflation fighters.

Last month, hourly wages rose 5% from a year earlier, the slowest year-over-year pace since December but still hotter than the Fed would want. The proportion of Americans who either have a job or are looking for one slipped slightly, a disappointment for those hoping that more people would enter the labor force and help ease worker shortages and upward pressure on wages.

Likewise, Rubeela Farooqi, chief U.S. economist at High Frequency Economics, said she didn't think September's softer jobs and wage numbers would stop the Fed from raising its benchmark short-term rate in November by an unusually large three-quarters of a point for a fourth consecutive time — and by an additional half-point in December.

On Wall Street, stocks tumbled Friday morning — a sign that investors foresee more aggressive Fed rate hikes ahead. The S&P 500 index sank 1.9% in early trading. And the yield on the 2-year Treasury note, which tends to track expectations for Fed actions, rose to 4.31% from 4.26% late Thursday.

The public anxiety that has arisen over high prices and the prospect of a recession is also carrying political consequences as President Joe Biden’s Democratic Party struggles to maintain control of Congress in November’s midterm elections.

In its epic battle to rein in inflation, the Fed has raised its benchmark interest rate five times this year. It is aiming to slow economic growth enough to reduce annual price increases back toward its 2% target.

It has a long way to go. In August, one key measure of year-over-year inflation, the consumer price index, amounted to 8.3%. And for now, consumer spending — the primary driver of the U.S. economy — is showing resilience. In August, consumers spent a bit more than in July, a sign that the economy was holding up despite rising borrowing rates, violent swings in the stock market and inflated prices for food, rent and other essentials.

Fed Chair Jerome Powell has warned bluntly that the inflation fight will "bring some pain," notably in the form of layoffs and higher unemployment. Some economists remain hopeful that despite the persistent inflation pressures, the Fed will still manage to achieve a so-called soft landing: Slowing growth enough to tame inflation, without going so far as to tip the economy into recession.

It’s a notoriously difficult task. And the Fed is trying to accomplish it at a perilous time. The global economy, weakened by food shortages and surging energy prices resulting from Russia’s war against Ukraine, may be on the brink of recession. Kristalina Georgieva, managing director of the International Monetary Fund, warned Thursday that the IMF is downgrading its estimates for world economic growth by $4 trillion through 2026 and that "things are more likely to get worse before it gets better.’’

Powell and his colleagues on the Fed’s policymaking committee want to see signs that the abundance of available jobs — there’s currently an average of 1.7 openings for every unemployed American — will steadily decline. Some encouraging news came this week, when the Labor Department reported that job openings fell by 1.1 million in August to 10.1 million, the fewest since June 2021.

On the other hand, by any standard of history, openings remain extraordinarily high: In records dating to 2000, they had never topped 10 million in a month until last year.

Last month's decline in unemployment was widely shared across demographic groups. The jobless rate for Hispanics tumbled to 3.8%, the lowest level in government records dating to 1973. Unemployment for Black Americans also fell, from 6% in August to 5.8% in September, still above its record low of 5.1% in November 2019.

Many Americans appear to have decided that there are still plenty of jobs available and that they can take their time accepting one. Among them is Jenny Savitscus of Columbus, Ohio, who recently earned a technology certificate at a program run by Goodwill. Savitscus, 45, who'd like a job in high technology, said she's willing to hold out for an employer that will offer flexible hours and work-at-home options.

"There are opportunities out there,’’ she said. "Employers and job seekers are trying to find the right balance’’ between work and home life. She said she can afford to wait for just the right position because she has two part-time teaching jobs.

Friday's government report underscored how resilient the job market remains even if it may be slowing.

"The U.S. labor market continues to decelerate, but there are no signs that it’s stalling out,’’ said Nick Bunker, head of economic research at the Indeed Hiring Lab. "Payroll growth is no longer at the jet speed we saw last year, but employment is still growing quickly."

Radial, a company that powers the online businesses for Lucky Brands, Tommy Hilfiger and Calvin Klein, is one employer that is hiring more cautiously. The company plans to hire 15,000 seasonal workers at its 25 warehouses — 7,000 fewer than a year ago — and 2,000 at its customer-service centers, said Sabrina Wnorowski, chief human resource officer for Radial, based in King of Prussia, Pennsylvania.

Wnorowski said the company’s more moderate approach to hiring reflects a renewed focus on adding workers closer to the peak of the holiday season to make them more productive. She noted that online sales growth is slowing and that the tight job market appears to be weakening a bit. Peloton, for example, the maker of high-end exercise equipment, announced Thursday that it is cutting 500 jobs — 12% of its workforce.

Yet some companies continue to plow ahead with hiring. Walt Rowen, president of Susquehanna Glass Co. in Columbia, Pennsylvania, said the company, which makes decorative glass products, needs around 15 seasonally workers along with a full-time staff of 40 to 45. Rowen has raised entry-level pay from around $9 an hour before the pandemic to $14 an hour and yet still struggles to fill vacancies.

"It’s getting harder and harder,’’ he said. "You used to be able to interview 10, bring in five and keep three. Now we’re interviewing 20, getting five and keeping one.’’