Tanger Outlets shooting: Alleged teen shooter released from hospital, will be charged as an adult

GLENDALE, Ariz. - A teenage boy will be charged as an adult after a shooting that injured four people, including a 4-year-old child, at an outlet mall near the Westgate Entertainment District in Glendale on March 23.

The call came in around 2:40 pm. at the Tanger Outlets for reports of a fight between two groups of people that turned into a shooting, says Glendale Police Officer Tiffany Ngalula.

When the first officer arrived, he was reportedly flagged down and told that a 4-year-old boy had been shot. First responders took the child, his mother, and a teenage boy to the hospital.

Police discovered that a 17-year-old boy, accompanied by an adult woman and her child, had started fighting with two other teenage boys ages 15 and 16. The 17-year-old began shooting at the other group, and the 15-year-old shot back, police said.

Everyone was injured in the shooting except for the 16-year-old.

The woman and 15-year-old have been released from the hospital, but the little boy is still in critical condition.

As for the 17-year-old, he's been released from the hospital and is in juvenile jail, being held on a $250,000 cash-only bond, Glendale Police said on March 26.

On March 24, authorities released body camera video of police arriving at the scene, mere minutes after 911 calls started coming in.

In the video, officers were seen rushing to the scene, as stores immediately went into lockdown in response to the shooting. Authorities searched businesses twice, and they were taken off lockdown as of 5:45 p.m. Police also say this wasn't an active shooter incident and was isolated. 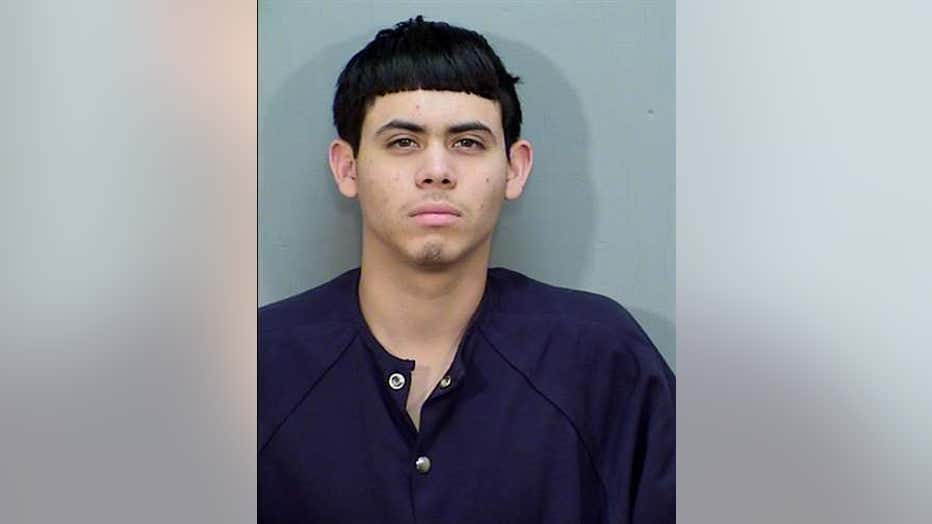 The suspect in the case will be charged as an adult, the Maricopa County Attorney's Office said. He is identified in court documents obtained by FOX 10 as Raul Ulices Franco.

According to the court documents, the incident began when a car drove into the outlet mall, and three men were seen leaving the car and approaching Franco and other victims.

The suspect, according to investigators, was seen removing a handgun from a backpack, turning and pointing it at the group that exited the car.

One of the victims, according to investigators, recognized the suspect as someone he had been having problems with, with the victim in question saying that the problems stemmed from social media disrespect.

Franco, according to court documents, told detectives that the handgun used in the incident was purchased a few days prior for protection.

"[The suspect] heard one of the individuals say something to the effect of ‘what’s up fool?' [The suspect] advised he decided to pull his gun from his backpack and immediately fire at the ground in front of [three victims] to get them to run away," read a portion of the documents.

Following the shooting, one of the victims began to fire back at Franco, who was standing next to his family members.

Damages caused by gunfire, according to court documents, were placed at $10,000, based on estimates by Tanger Outlets.

According to court documents, Franco lives in Phoenix with his girlfriend and has ties to Mexico. He has been arrested and convicted in the past for drug-related offenses and was on probation from a drug conviction in 2019. He is being charged with endangerment, aggravated assault, criminal damage, and weapons-related offenses.

‘Please keep them in your prayers’

"I mean, it's such a large scene," said Ngalula. "It is a super traumatic scene for everybody involved."

"Things like this are tragedies when they happen. We are fortunate that no one died from this. Please keep them in your prayers," said Glendale Mayor Jerry Weiers.

We are deeply saddened by the events that took place on Wednesday. The Glendale Police Department has confirmed that this was an isolated incident, and we are working closely to assist in their investigation. Our thoughts and prayers are with all those affected, and Tanger Outlets remains focused on the safety and well-being of our team members, retailers and shoppers.

Shoppers said to say it was an emotional day is an understatement.

"They told us to stay in a group, and it was crazy because you see stuff thrown on the floor. People, you know, left their bags 'cause they were running out, so I mean, it was intense," said Virginia Rosas.

"We were told that we were in lockdown and moved to the back of the store, and then shortly after, a lot of police with rifles went running by," said Mike Lund.

Other shootings have happened in the area

This is not the first shooting to have happened in the area in recent years.

In May 2020, a shooting in the area left three people hurt. The suspect, identified as 20-year-old Armando Hernandez Jr., said he had been bullied, and wanted to gain respect. He was subsequently indicted on 39 charges, including attempted first-degree murder, disorderly conduct, endangerment, criminal damage, and other alleged weapons-related offenses.

Another shooting happened in the area in December 2020. At the time, police officials said two people got into a fight.

"That is when the vehicle struck the 21-year-old, and then, he pulled out a gun and started firing," said Officer Tiffany Ngalula with Glendale Police.

A retired DPS captain who is now a security consultant has advice for people when they are faced with a shooting situation. FOX 10's Justin Lum reports.

While this shooting was considered to be an isolated incident, a retired DPS captain said what happened could have been just as dangerous as an active shooter situation, where there is usually one assailant.

Steve Enteman is a retired 25-year DPS captain who is now a consultant to companies needing security detail. He had advice for people in situations when bullets are flying.

"It’s sad that we’re in this day and age that we have to think that through, but when you’re out with your family or by yourself, those are the first things you should be looking at is what’s my exit, what’s my plan, if this situation was to happen," said Enteman.

"A lot of these organizations are saying, ‘we go private security, and we’re having to go armed security,’ so that brings a whole new level and depth to it, and that is a demand to it, and that has changed a lot," said Enteman.

Former Arizona Department of Public Safety (DPS) Director Frank Milstead also talked about shootings., He said when an incident is perceived to be an active shooter or public threat, time is the most important element.

First, officers have to identify and neutralize the threat.

"Then we go back and apply triage to those who are injured. But the longer that we waited to go in, or if we try to help people as we move forward, it made it more complicated because more and more people were at risk," said Milstead.

Again, the Tanger Outlets shooting was not an active shooter situation, but officers immediately responded as if it was.

"There were people that had already sheltered in place. Those responders had to go door-to-door, room-to-room, store-to-store, and make sure there was nobody else hiding that was a threat and to liberate those who had sheltered in place to tell them it was safe to come out," Milstead said.

Many law enforcement agencies respond using what they call an incident command system, or ICS.

"They set up an inner and outer perimeter. They set up staging, they set up traffic control, and they have a huge response of law-enforcement coming to a singular scene," Milstead said.

They keep radio traffic to a minimum to keep lines of communication free and clear, and they ask everyone to stay out of the way.

"The best thing that they can do is either try to communicate with their loved ones through cell phone technology … and provide them information they don't have. To respond to the scene or try to get into the scene just complicates matters for law enforcement," Milstead said.

FOX 10's Brian Webb has the latest on a shooting at Tanger Outlets that left several people injured, including a child.

A day following a shooting that injured four people, including a child, at the Tanger Outlet Malls in Glendale, police released body camera footage of the shooting, as well as 911 calls related to the incident. FOX 10's Irene Snyder reports.