Secretary-General Antonio Guterres, the head of the United Nations warned world leaders at the General Assembly that nations are "gridlocked in colossal global dysfunction" in opening remarks on Sept. 20, 2022.

UNITED NATIONS - In an alarming assessment, the head of the United Nations warned world leaders Tuesday that nations are "gridlocked in colossal global dysfunction" and aren’t ready or willing to tackle the challenges that threaten humanity's future — and the planet's. "Our world is in peril — and paralyzed," he said.

Speaking at the opening of the General Assembly’s annual high-level meeting, Secretary-General Antonio Guterres made sure to emphasize that hope remained. But his remarks reflected a tense and worried world. He cited the war in Ukraine and multiplying conflicts around the world, the climate emergency, the dire financial situation of developing countries and setbacks in U.N. goals for 2030 including an end to extreme poverty and quality education for all children.

He also warned of what he called "a forest of red flags" around new technologies despite promising advances to heal diseases and connect people. Guterres said social media platforms are based on a model "that monetizes outrage, anger and negativity" and buys and sells data "to influence our behavior." Artificial intelligence he said, "is compromising the integrity of information systems, the media, and indeed democracy itself."

The world lacks even the beginning of "a global architecture" to deal with the ripples caused by these new technologies because of "geopolitical tensions," Guterres said. 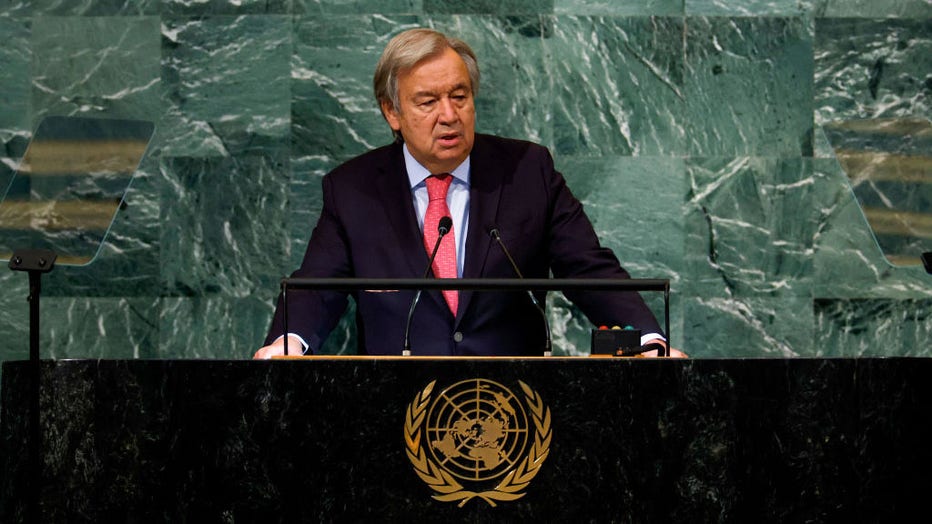 United Nations Secretary General Antonio Guterres speaks during the 77th session of the United Nations General Assembly (UNGA) at the U.N. headquarters on September 20, 2022 in New York City. After two years of holding the session virtually or in a h

His opening remarks came as leaders from around the planet reconvened at U.N. headquarters in New York after three years of pandemic interruptions, including an entirely virtual meeting in 2020 and a hybrid one last year. This week, the halls of the United Nations are filled once more with delegates reflecting the world’s cultures. Many faces were visible, though all delegates are required to wear masks except when speaking to ward off the coronavirus.

Guterres made sure to start out by sounding a note of hope. He showed a photo of the first U.N.-chartered ship carrying grain from Ukraine — part of the deal between Ukraine and Russia that the United Nations and Turkey helped broker — to the Horn of Africa, where millions of people are on the edge of famine It is, he said, an example of promise and hope "in a world teeming with turmoil."

He stressed that cooperation and dialogue are the only path forward to maintain global peace — two fundamental U.N. principles since its founding after World War II. And he warned that "no power or group alone can call the shots."

"Let’s work as one, as a coalition of the world, as united nations," he urged leaders gathered in the vast General Assembly hall.

It's rarely that easy. Geopolitical divisions are undermining the work of the U.N. Security Council, international law, people’s trust in democratic institutions and most forms of international cooperation, Guterres said.

"The divergence between developed and developing countries, between North and South, between the privileged and the rest, is becoming more dangerous by the day," the secretary-general said. "It is at the root of the geopolitical tensions and lack of trust that poison every area of global cooperation, from vaccines to sanctions to trade.

Before the global meeting was gaveled open, leaders and ministers wearing masks to avoid a COVID-19 super-spreader event wandered the assembly hall, chatting individually and in groups. It was a sign that despite the fragmented state of the planet, the United Nations remains the key gathering place for presidents, prime ministers, monarchs and ministers.

Nearly 150 heads of state and government are on the latest speakers’ list, a high number reflecting that the United Nations remains the only place not just to deliver their views but to meet privately to discuss the challenges on the global agenda -- and hopefully make some progress.

The 77th General Assembly meeting of world leaders convenes under the shadow of Europe’s first major war since World War II — the conflict between Russia and Ukraine, which has unleashed a global food crisis and opened fissures among major powers in a way not seen since the Cold War.

At the top of the agenda for many: Russia’s Feb. 24 invasion of Ukraine, which not only threatens the sovereignty of its smaller neighbor but has raised fears of a nuclear catastrophe at Europe’s largest nuclear plant in the country’s now Russia-occupied southeast.

Leaders in many countries are trying to prevent a wider war and restore peace in Europe. Diplomats, though, aren’t expecting any breakthroughs this week.

The loss of important grain and fertilizer exports from Ukraine and Russia has triggered a food crisis, especially in developing countries, and inflation and a rising cost of living in many others. Those issues are also prominent on the agenda.

Brazil's President Jair Bolsonaro, traditionally the first speaker, called for an immediate ceasefire in Ukraine, protection of civilians and "the maintenance of all channels of dialogue between the parties." He opposed what he called "one-sided or unilateral" Western sanctions, saying they have harmed economic recovery and have threatened human rights of vulnerable populations.

Senegal's President Maky Sall, who chairs the 55-nation African Union, and stepped to the podium next, called for "de-escalation," a halt to hostilities and "a negotiated solution to avoid the catastrophic risk of a potentially global conflict." He called or a "high-level mediation mission" and said the union is ready to contribute.

King Abdullah II of Jordan said the pandemic, exacerbated by the crisis in Ukraine, has disrupted global supply chains and increased hunger. Many well-off countries experiencing empty food shelves for the first time "are discovering a truth that people in developing countries have known for a long time-- for countries to thrive, affordable food must get to every family’s table," he said.

"On a global level, this demands collective measures to ensure fair access to affordable food, and speed the movement of staples to countries in need," Abdullah said.

Queen Elizabeth II invoked her late husband, Prince Philip, in a video message Monday to world leaders gathered for the U.N. COP26 climate-change summit in Scotland. The Queen spoke along with Charles, Prince of Wales at COP26.

The death of Britain’s Queen Elizabeth II and her funeral in London on Monday, which many world leaders attended, created last-minute headaches for the high-level meeting. Diplomats and U.N. staff have scrambled to deal with changes in travel plans, the timing of events and the logistically intricate speaking schedule for world leaders.

There is one exception to the in-person speeches. Over objections from Russia and a few allies, the assembly voted last Friday to allow Ukrainian President Volodymyr Zelenskyy to prerecord his speech because of reasons beyond his control — the "ongoing foreign invasion" and military hostilities that require him to carry out his "national defense and security duties." His address will be shown on Wednesday afternoon.

The U.S. president, representing the host country for the United Nations, is traditionally the second speaker. But Joe Biden attended the queen’s funeral, and his speech has been pushed to Wednesday morning.