Suspected wrong-way driver released from jail after crash that left 2 dead, including his friend

LITCHFIELD PARK, Ariz. - Two people are dead, and a man was arrested in connection to a Jan. 28 wrong-way crash on the Loop 303 near Bethany Home Road, authorities said.

Arizona Dept. of Public Safety officials said the crash involved multiple vehicles and happened just before 4 a.m. after a pickup truck was reported driving north down the southbound lanes.

The wrong-way truck collided with an SUV going southbound, officials say. The 61-year-old SUV driver, Brian Vaughn, died at the scene, and a passenger in the truck, 21-year-old Joaquin Santiago Ruiz, died at the hospital.

Officials say the suspected wrong-way driver, 21-year-old Fabian Grimaldo, Jr., was impaired. He was hospitalized but has since been released and booked into jail – however on Jan. 30, he posted a $200,000 bond and was released from jail.

According to court documents, Grimaldo's blood-alcohol level was nearly three times the legal limit at the time of the crash.

Grimaldo is a 21-year-old community college student with intentions of going to Arizona State University – now, he could potentially go to prison.

"This is an absolute tragic, horrific accident that happened. One of the deceased is Fabian’s best friend that was in the truck. It weighs heavy on him, heavy on the family. He was considered part of that family, they were that close," said Marc Adair, Grimaldo's defense attorney.

In court, prosecutors asked the judge to set a $300,000 bond. Grimaldo’s attorney argued he has strong family support, no criminal history, and recently had surgery.

"This is his left arm. This is not a result of the collision in this case. He had a tumor on his arm since he was six months old," Adair said. "Just on Monday, he had pins removed. So he has open wounds that the band-aids are covering."

According to DPS, in 2021 alone, there were 62 wrong-way crashes, and 22 people were killed on Arizona highways. DPS says in this case, the crash happened about two minutes after witnesses first called and reported the wrong-way vehicle.

Grimaldo was released with an electronic tracking device, he has to undergo alcohol and drug test monitoring and cannot consume any alcohol during his release. His preliminary court hearing is scheduled for the first week of February. 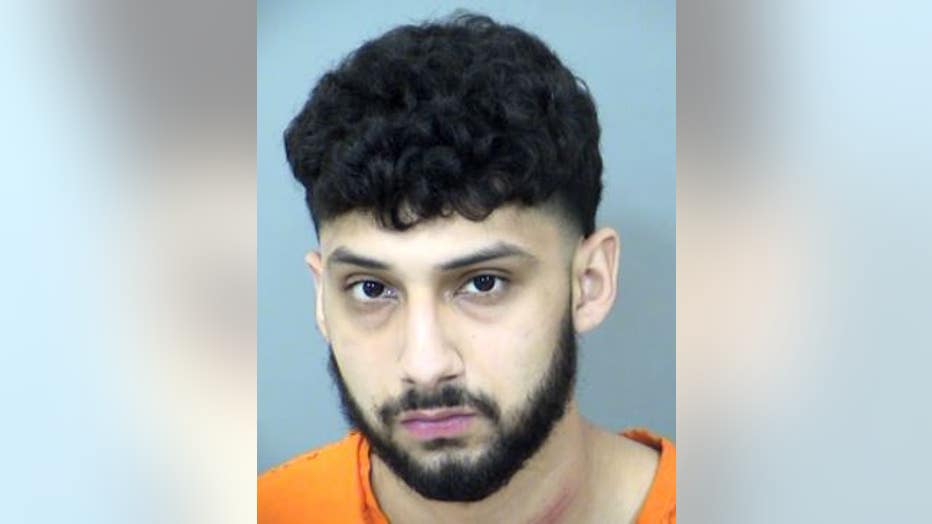 Trooper Campbell said the weather made it difficult for law enforcement officials at the scene.

"It makes it challenging for the detectives," Campbell said. "We have roadway evidence, and even just communications - trying to talk on the radio with the wind blowing makes it a challenge."

There are several thermal detection cameras located along off-ramps in the area. Those cameras are supposed to alert officials if a driver enters the freeway in the wrong direction.

"We did not get a flux activation on this. It was citizens that were calling this one in," said Trooper Campbell.

Arizona Dept. of Public Safety officials said two people are dead following the crash, and they believe impairment is a factor in the crash. A person is in custody. FOX 10's Nicole Garcia reports.

Officials say the suspected wrong-way driver, 21-year-old Fabian Grimaldo, Jr., was impaired. He was hospitalized but has since been released and booked into jail.