Two Phoenix Police officers are speaking out, after the department released body camera video of them pulling a driver from a burning car after a rollover crash that cut power to hundreds of people in north phoenix. FOX 10's Irene Snyder reports.

The crash happened near 35th Avenue and Thunderbird on Jan. 26, and video from the scene showed a car that collided into a power pole before landing upside down, and later catching fire with the driver inside.

"I heard a loud boom in my room, and we saw big sparks everywhere, and so I got up and ran out, realize it was a car accident, and the nurse in me ran," said Tarah Miller.

After the crash, two police officers went to work to get the driver out.

"The cops had used a fire extinguisher to get the window open and pulled him out, and then, we carried him across the street," said Miller.

The driver of the car was taken to the hospital, and is currently recovering from non-life threatening injuries.

"I don't know. I think these houses are cursed or something. This is the third thing that’s happened within a couple months," said witness Tre Hall.

"Is anybody inside?" one of the officers was heard saying.

A day after the dramatic rescue, the officers involved, now identified as Rachel Fernandez and Jessica Hunting, talked about what happened.

Both officers say they were working in the area when they saw smoke, and immediately jumped into action.

"When I was told that nobody had exited that vehicle, I was like I need to get them out now because the flames kept getting bigger, and we only had one little fire extinguisher to mitigate it at that point," said Officer Fernandez.

During the rescue, the officers had no way of knowing if the car was going to explode.

"You don't know what's gonna happen," said Officer Hunting. "You don't know if the fire is gonna increase explode, not explode. It was just that he was my main concern. Who cares what happens to me? He's my main priority."

The officers pried open the car's door, and on a count of three, they got the victim out.

Even though they saved a life, Officers Fernandez and Hunting say they do not consider themselves heroes

For them, it's just another day of the job.

"Every morning when I wake up, just put on the uniform, put on the badge, and I think to myself I'm just another police officer out there, doing my job. Never once will I ever think I'm a hero," said Officer Hunting.

"Helping people is just what we do," said Officer Fernandez.

Both officers said they inhaled a lot of smoke, but the doctor cleared them, and said they will be fine.

Crash in north Phoenix shears power pole in half, sends driver to hospital in critical condition

The rollover crash also resulted in a power outage for hundreds of people who live in the area. FOX 10's Brian Webb reports.

A power pole suffered serious damage in the crash, leaving it seemingly floating in mid-air, held up by electrical wires toward the top.

After the crash, the power was out for much of the area for most of the day.

"Working from home, power went out, but I was just finishing a call," said Lena Smith. "I actually take claims for auto accidents. Interestingly, this hits close to home." 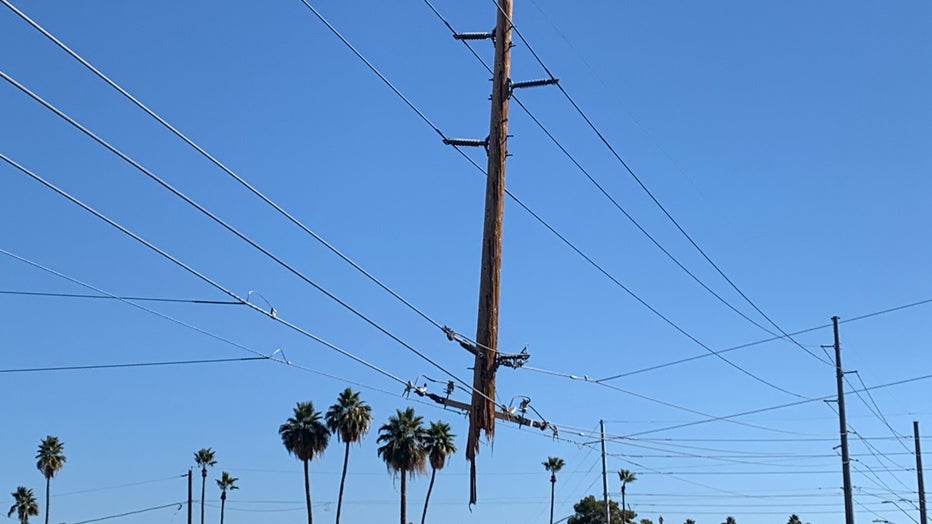 A power pole was sheared in half after a rollover crash near 35th Avenue and Thunderbird.