Mayor reacts to daughter being arrested

New York City Mayor Bill de Blasio says he was surprised by his daughter being arrested.

NEW YORK - Mayor Bill de Blasio's daughter was arrested in New York City during protests over the death of George Floyd in Minneapolis.

De Blasio confirmed the report Monday during a news conference about the arrest over the weekend of Chiara de Blasio.

The 25-year-old was one of approximately 100 people who refused to leave the roadway at East 12th Street and Broadway in Manhattan. The only daughter of the Mayor and First Lady Chirlane McCray was issued a desk ticket for unlawful assembly Saturday night in lieu of detention. 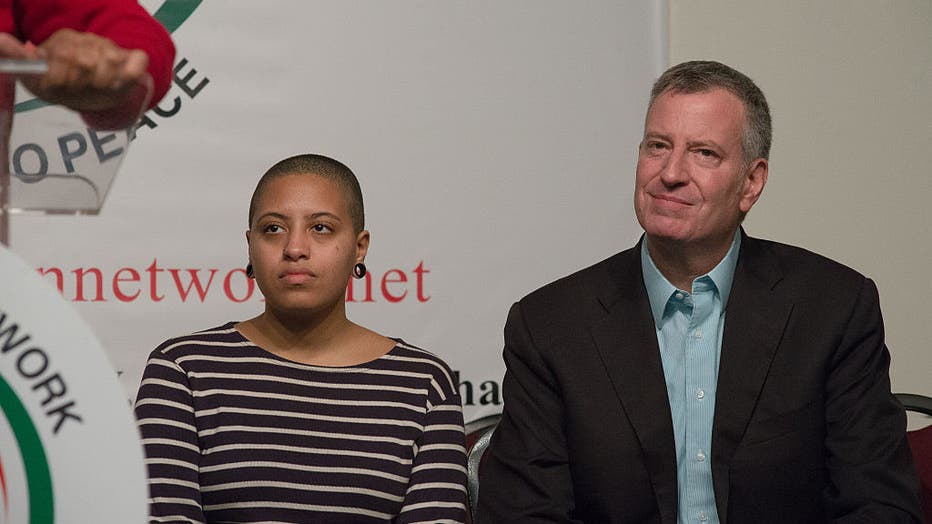 "I want you first to know and I think many, many parents can appreciate this," said de Blasio. "She's 25 years old and did not inform Chirlane and I of her intention to get arrested. I knew of some of her views. I knew she believed in peaceful protests. I knew she had participated a few nights ago but in a peaceful manner. When I found out that she had been arrested, finally reached her with Chirlane and we asked her to recount the whole story."

I admire that she was out there trying to change something she thought was unjust.

Mayor reacts to daughter being arrested

New York City Mayor Bill de Blasio says he was surprised by his daughter being arrested.

The arrest came an hour before the mayor held a news conference telling protesters to go home.

"She was acting peacefully. She believes that everything she did was in the spirit of peaceful, respectful protest. The bottom line is I will let her speak for herself in any way that she wants to. I admire that she was out there trying to change something she thought was unjust," said de Blasio.

Chiara de Blasio was among 700 people arrested over the weekend.

"A lot of times when bottles and rocks are coming out of a crowd, we start to give the order that this is now an unlawful assembly, and anyone who refuses to move will get and can get arrested and will," said NYPD Chief of Dept. Terrence A. Monahan during FOX 5 NY morning program, 'Good Day New York. "The exact circumstances surrounding that arrest I'm not 100 percent sure. We did not know about it until last night that it was. It's something that we're still looking into."

Four days of protesting against police brutality kept NYC on edge into the early morning hours of Monday, as thousands of people marched and many protesters and officers tried to keep the peace after days of unrest that left police cars burned and hundreds of people under arrest.

Mayor Bill de Blasio blamed much of Saturday night's violence after protests demanding justice for George Floyd on what he is describing as a well-organized group of anarchists.