Drivers in the Far East Valley were very excited on Aug. 11, as an extension of State Route 24 is complete, almost two years after construction began. FOX 10's Danielle Miller reports.

PHOENIX - Drivers in the Far East Valley were very excited Thursday morning as the Arizona Department of Transportation announced its $77 million project to extend State Route 24 is complete, nearly two years after construction started on the four-lane divided roadway.

Construction on the four-lane divided roadway began in November 2020

"This gets drivers from the area near Ellsworth Road on out to Ironwood Drive in Pinal County, so that's five miles of an east-west roadway that's gonna make a big difference for drivers in this area," said Doug Nintzel with ADOT.

The interim highway was meant to provide drivers with another option for travel, and to alleviate congestion in the area. There are future plans to expand.

"This is just a start," said Nintzel. "By early next year, the City of Mesa plans to have Signal Butte Road connected to State Route 24. That will open up a very important connection, in terms of drivers being able to access this particular expressway that we put in. This is really important from the standpoint of ‘it leads directly into the Loop 202 Santan Freeway,’ so there's no stopping at the traffic signals at Ellsworth Road. You just are able to make that connection from this expressway onto the freeway.

Since this is not a major freeway just yet, the speed limit is 45 miles per hour. 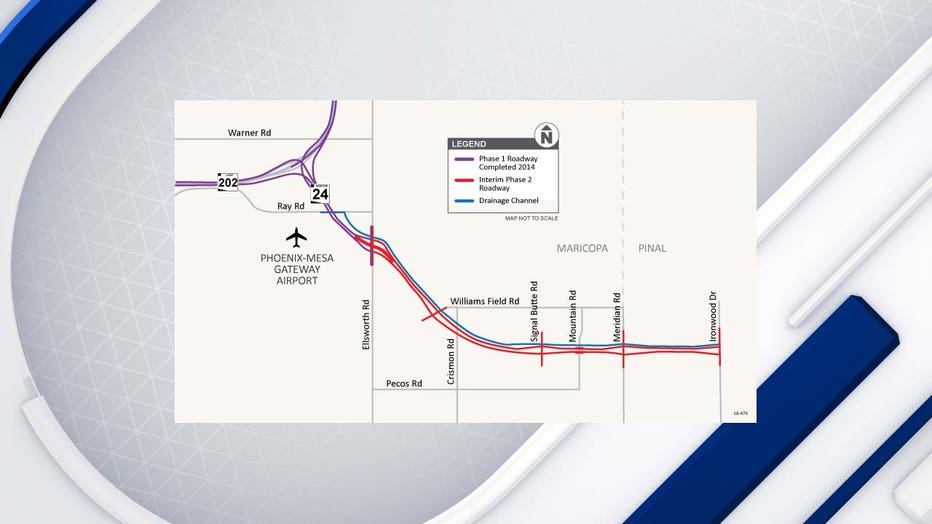 The expansion of State Route 24 from Ellsworth Road to Ironwood Drive in the east Valley is now complete. (ADOT)