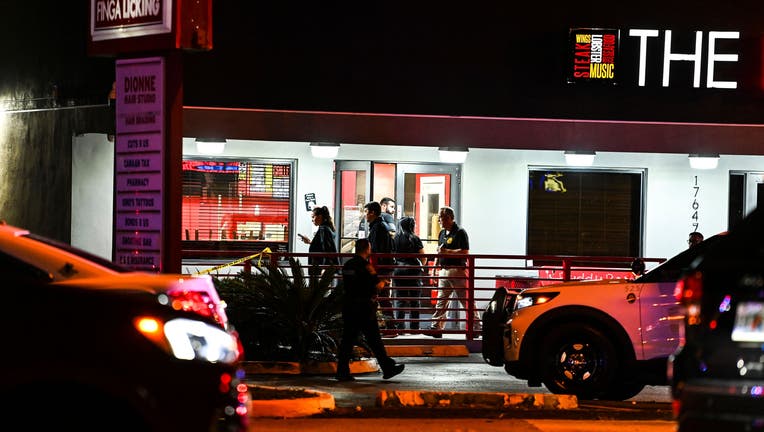 Miami Gardens Police officers walk out of the The Licking restaurant in Miami Gardens, Florida, on January 5, 2023. - Multiple people were shot Thursday night outside of a restaurant during a video shoot for rappers French Montana and Rob49. (Photo b

Authorities are continuing to investigate a shooting outside a Miami Gardens restaurant Thursday night which left at least 10 people injured, according to multiple reports.

The shooting may have involved rappers French Montana and Rob49, as the two were recording a music video in the area, according to WFOR-TV.

Miami Gardens police responded to the shooting outside The Licking restaurant just before 8 p.m., where they found multiple victims, according to WSVN. Police have not confirmed the number of injured, though sources told the station it was more than 10.

Paramedics and Miami-Dade Fire Rescue also responded to the scene, transporting four of the victims to area hospitals, with one in critical condition.

Other victims transported themselves to the hospital, WFOR reported.

A witness of the shooting told WFOR-TV that it happened during rapper French Montana's music video, which was being recorded near the restaurant.

According to WSVN, witness Ced Mogul said he came out to watch the rapper shoot the video, when at some point a person in the crowd watching the production was robbed of his watch and  wallet, which caused the situation to escalate.

Mogul said, "It was like at least 13, 14, 15 gunshots. It was very rapid, it sounded like an assault rifle. I took off running, and I was looking back, but I was like, ‘You know what? Let me just duck first, and then people started asking me, you know, ‘Can you help me?’ When I realized people were asking for help, there was nothing you could do about it when you got shot."

The status of the other victims is not known at this time.

Police have not provided information on a possible suspect or suspects but remain on the scene.