The community is calling for accountability and answers following an explosion involving fireworks confiscated by LAPD.

LOS ANGELES - Local and federal authorities were working to determine what caused a massive explosion in a South Los Angeles neighborhood. Police said the explosion happened when they attempted to safely detonate homemade fireworks.

The explosion occurred just after 7:30 p.m. Wednesday in the 700 block of East 27th Street.

The Los Angeles Police Department said the explosion was the result of a catastrophic failure in what was supposed to be a blast-resistant container used by bomb squads worldwide. Bomb technicians placed 10 pounds of homemade fireworks that were seized from someone’s home inside the container, along with 5,000 pounds of what are considered over-the-counter fireworks. However, the over-the-counter fireworks contained a powder that made them too dangerous to transport.

Several South Los Angeles residents say fireworks are common in their neighborhood, but none ever expected the loud explosion that left 17 injured on Wednesday afternoon.

Since officials determined the explosives were too dangerous to transport, they opted to detonate them at the scene inside the specially-made container. Shortly after, the fireworks erupted and its impact was so strong, it knocked people to the ground, overturned at least one car, and blew out windows in the area.

"We heard it. It was really, really hard. It felt like an earthquake…we never felt it this hard," a resident said.

Firefighters and officers rushed in to help the wounded. Seventeen people were hurt, including nine LAPD officers, an ATF agent, a television news photographer and several residents. The ages of the victims range from their 40s to their 80s, officials said.

Before the fireworks erupted inside the bomb squad truck, LAPD seized the illegal fireworks from a South LA home near the intersection of 27th and San Pedro streets. 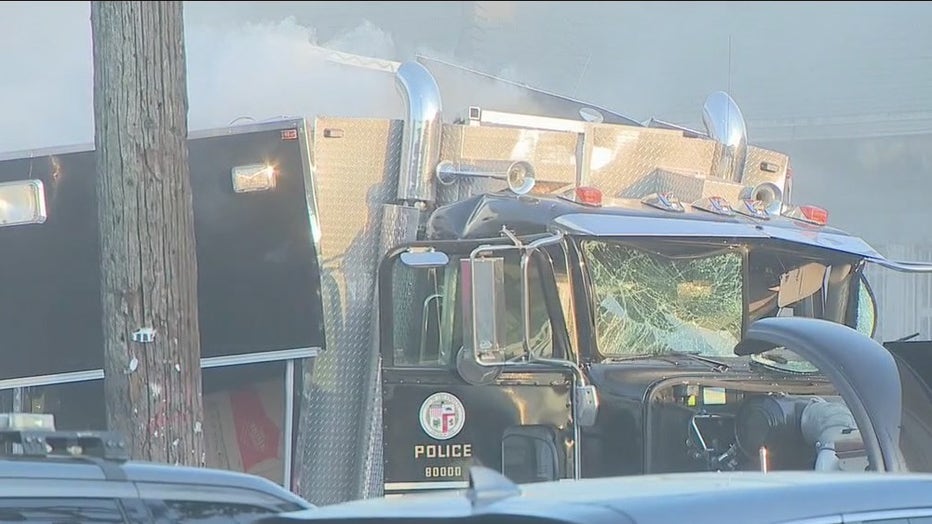 On Wednesday night, LAPD Chief Michel Moore said 27-year-old Arturo Cejas was taken into custody and was charged with possession of a destructive device. Cejas is also expected to face child endangerment charges as officials discovered his 10-year-old brother also lived inside the home where he kept the illegal fireworks.

A national team with the ATF arrived in Los Angeles on Thursday. They will investigate and work to determine what caused the catastrophic failure.

Nine families were displaced by the explosion and residents located within the immediate area remain under a mandatory evacuation order.