Inauguration of the Nativity scene and lighting of the Christmas tree in the Vatican on Dec. 11. 2020. (Credit: Vatican News via Storyful)

The Vatican’s 2020 nativity scene, which has been different every year for the past decade, was unveiled on Dec. 11. Since then, it has drawn mixed reactions on social media, with some critics thrown by its futuristic style.

Some critics even compared the unconventional nativity to a scene from “Star Wars.”

The ceramic statues, all of which hold “cultural heritage not immediately visible to the eye,” according to the Vatican News, have been the target of harsh remarks, with some likening one of the statues to Darth Vader.

The collection took more than 10 years to piece together by students and teachers at the F.A. Grue art institute of Castelli, Italy. “Made up of a small part of a 52-piece collection, the nativity scene is composed of life-sized ceramic statues, made in the typical style of Castelli, in Italy, internationally known for its ceramic artwork,” Vatican News reported.

One of the pieces, which looks remarkably similar to an astronaut, has an interesting significance.

“The soldier-looking statue is a centurion and signifies a ‘great sinner,’” Marcello Mancini, a teacher at the school where the nativity set was made, told the Catholic News Agency (CNA).

Mancini also noted that the “astronaut” was created and added to the collection after the 1969 moon landing.When the collection, called the “Monumental Nativity Scene of Castelli,” was first debuted in 1965 in Castelli, Mancini told CNA that the reviews were mixed, even then.

“‘It’s ugly, it’s beautiful, it seems to me, it doesn’t seem to me,’” Mancini said of the public’s past reactions.

The sculptures were also showcased “at Trajan’s Market in Rome. Later it also made its way to Jerusalem, Bethlehem, and Tel Aviv for exhibitions,” Mancini told CNA. 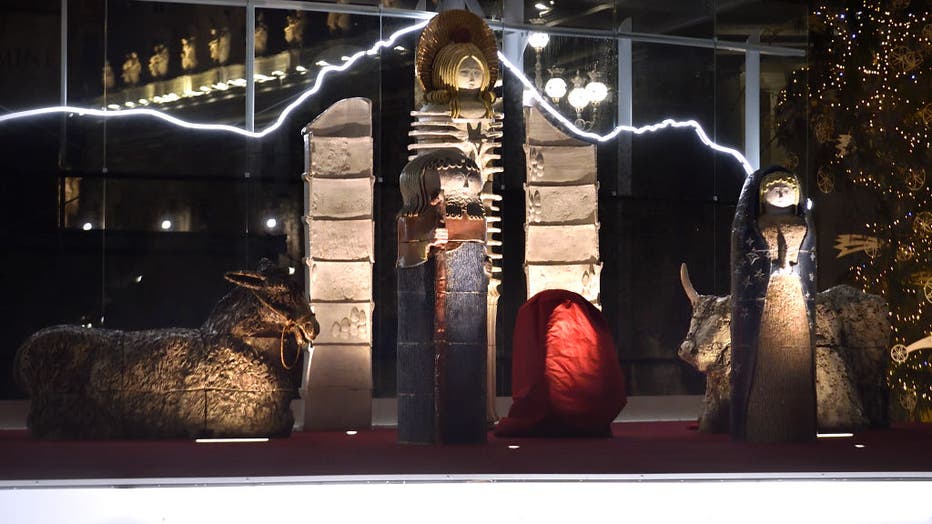 Despite those past opinions as well as present, Mancini told CNA that the nativity “doesn’t embarrass us.”

“I do not know which criticism to answer, the school has allowed the exhibition of one of its historical artifacts,” Mancini told CNA. “It is rich in symbols and signifiers that offer a non-traditional reading of the nativity scene.”

Past nativity scenes were kept relatively traditional, with the very first nativity scene appearing in Greccio, Italy. Saint Francis of Assisi is credited with starting the hallowed tradition in 1223, according to Vatican News.

It was just recently that the Vatican started to allow “for the scene to be donated for display by different Italian regions,” according to World Catholic News.

“It’s so divisive, I don’t hear a lot of people defending it,” Elizabeth Lev, a Rome-based art historian who teaches at Duquesne University, told the National Catholic Register, regarding the newest nativity scene.

“People look to the Vatican in particular for the tradition of beauty,” Lev added. “We keep beautiful things in there so that no matter how awful your life is, you can walk into St. Peter’s and that’s yours, that’s part of who you are, and it reflects who you are and the glory of who you are.”

In a 2019 letter from Pope Francis titled the Apostolic Letter Admirabile signum, the pope details the significance of the first nativity scene, saying that Saint Francis wished to see with his own eyes the mysterious beginnings of Jesus Christ.

“All those present experienced a new and indescribable joy in the presence of the Christmas scene. The priest then solemnly celebrated the Eucharist over the manger, showing the bond between the Incarnation of the Son of God and the Eucharist. At Greccio there were no statues; the nativity scene was enacted and experienced by all who were present,” according to the letter.