After decades, Valley woman reunites with her children from the United Kingdom

One Valley family will have a Thanksgiving family fathering that is anything but ordinary. FOX 10's Bailey Miller reports.

PHOENIX - One Valley family will have a Thanksgiving family fathering that is anything but ordinary.

For the first time in nearly 60 years, a Mesa mother is reunited with her children from the United Kingdom.

The UK-based children of 86-year-old Margaret Shimkus grew up thinking she was dead, until just two months ago. They found out she was living in Arizona, and that they had four other siblings as well.

"I was excited. I don't know what to say. I was excited and I can't wait. They are coming in now," said Shimkus.

As Shimkus and her two daughters wait, their emotions escalate. They are nervous.

Nora Stout and another of Shimkus' daughter, Helen, don't know if their five siblings from the United Kingdom will like them. Afterall, they have never met.

"I kept wondering even if I was to find them, should I contact them because they knew nothing about us. We only knew about them. I didn't want to ruin their lives," said Stout.

For many years, Shimkus had been living with a secret, and about 12 years ago, Stout learned what it was.

"My mom actually told me that she had five other kids," said Stout.

Shimkus was forced to leave because of the abuse she says she endured by her husband.

"The young man I was with, he beat me up so bad, and I felt bad," said Shimkus.

The man told Shimkus that he would kill Shimkus if she ever came back for her five children. At the time, her oldest child was seven years old, and her youngest was just 11 months old.

After that, Shimkus met an American man who was serving in the United States Air Force in the United Kingdom. Shimkus eventually moved with him to Arizona and started a family.

For 58 years, Shimkus wondered about her children. Two months ago, Shimkus' grandson finally found her children on Facebook.

After corresponding, they saw each other for the first time, via video conferencing.

"It is nice to know they were OK," said Shimkus.

"A lot of tears. What do you talk about?" said Stout.

After that, they knew they needed to meet. Shimkus' children from the United Kingdom flew to Phoenix, and for the first time, the families were together as one. 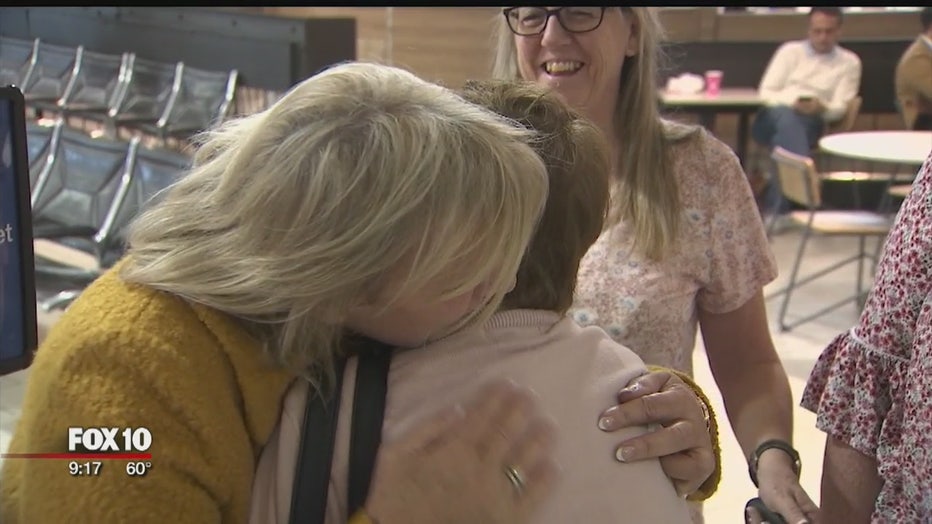 At the airport, the newly-reunited family shared stories, jokes, and plans for what they were going to do, all while Shimkus was smiling from ear to ear.

The day after the reunion, FOX 10 caught up with Shimkus' children from the United Kingdom. They were all still talking about the huge events that had just occurred.

"I was just looking at them, and it just doesn't seem real," said Elizabeth Oliver.

"I just couldn't think of anything. I just wanted to hug them and cuddle them and say hello and everything and tears. It does get emotional," said David Inglis. When the siblings got the message about their long lost family, their entire world was flipped upside down.

"So is mum alive? Then she said yes, she is alive and very well, and I just broke down because I had been looking for her," said Inglis.

"All these years we didn't know we had these sisters because we were told mum was dead," said Oliver.

Growing up, they often asked their father where their mother was, but it was always the same response.

Inglis and Oliver said after Shimkus left, the siblings were in and out of foster care, but they would always end up back home with their father. While they were with him, they said they were fighting to survive.

"Of course, with the way he would hit us the way he did, of course, he did it to her," said Oliver.

They knew this was the reason their mom had to leave.

"at the end of the day, she had no choice whatsoever, so I don't blame her for that," said Inglis.

Now, they plan for a lot more tears, laughter, and more stories to be told.

"They found us, and we are here. It is unbelievable," said Inglish.

They are all here, they are all together, and they say now, that is all that matters.

The father died several years ago, and now, Shimkus' two other children are flying in from Colorado, so all nine of her kids can be together for the first time.

As for the siblings from the United Kingdom, they now get to experience their very first American Thanksgiving.