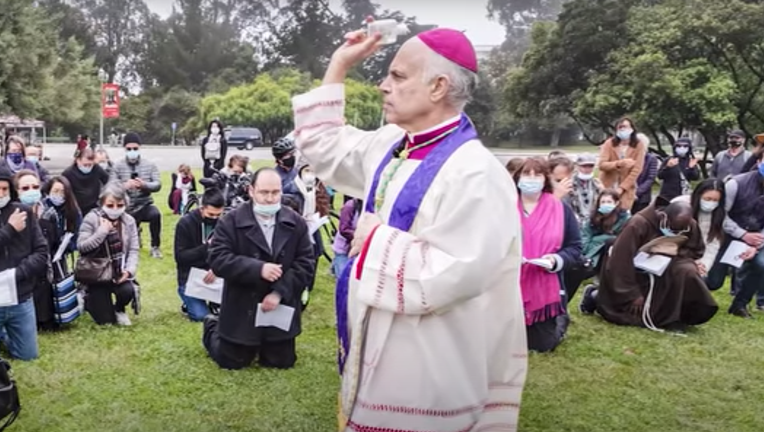 SAN FRANCISCO - Some Catholic churches in San Francisco have flouted coronavirus shelter-in-place orders, the city attorney's office said this week, including holding public Masses and indoor services where neither the priest nor the altar boy were seen wearing masks.

"It now appears that the Archdiocese has gone forward and held multiple indoor large gatherings at its facilities, which not only violate the Health Order but also evidence an alarming failure to follow common-sense safety protocols," City Attorney Dennis Herrera wrote June 29 in a cease-and-desist letter to the Archbishop's legal counsel. "Over the past few weeks, the City has received multiple public complaints about churches opening to the public."

In addition, the San Francisco city attorney's office said that churchgoers have also been meeting outside in groups larger than 12.

One such gathering occurred last Saturday, where Archbishop Salvatore Cordileone convened about three dozen worshipers to lament what he called the "blasphemous"  toppling of the controversial statue of Junipero Serra.

Serra was an 18th century Francisco priest who is viewed by many indigenous people as a colonizer who contributed to the destruction of Native American culture. Cordileone disputed that notion and said the dismantling of such a priest was "pure evil."

In video put out by the church, Cordileone was not wearing a mask, but community members were.

Herrera said that if the archbishop did not agree to stop holding these services, his office would seek a temporary restraining order against the church.

The following day, the Archbishop of San Francisco promised, through its lawyer,  to stop holding these gatherings and has now repeated that order to the priests.

Throughout California and the country, individual pastors have said that they listen to a higher authority and have argued, sometimes in court, that not being able to meet with others and pray is a violation of their constitutional rights. In turn, there have been coronavirus outbreaks following many of these services, including in Rancho Cordova near Sacramento as well as in Mendocino and Butte counties, to name a few.

In an interview this week, diocese spokesman Mike Brown said that as far as he knew, the correspondence between the archbishop and the city was a private matter and negotiations about shelter-in-place restrictions had been proceeding smoothly until then.

Brown said the cease-and-desist letter came as a surprise.

"There is no pastor that I know of who is out there objecting or resisting," Brown said. "The archbishop had clearly communicated to each priest to take this seriously and we are on board with the city requirements," Brown said.

However, the city attorney's investigators showed otherwise and pointed to at least eight examples of churches allegedly violating the health order: