Around half of the class of Rhodes Scholars from the U.S. who will study at Oxford University in England next year are first-generation Americans and a majority are minority candidates.

OXFORD - Around half of the class of Rhodes Scholars from the U.S. who will study at Oxford University in England next year are first-generation Americans and a majority are minority candidates.

The Rhodes Trust announced its diverse 2020 class of 32 Americans chosen as Rhodes Scholars representing the U.S.

“This year’s American Rhodes Scholars—independently elected by 16 committees around the country meeting simultaneously—once again reflect the extraordinary diversity that characterizes and strengthens the United States. They will go to Oxford in September 2020 to study in fields broadly across the social, biological and physical sciences, and in the humanities. They are leaders already, and we expect their impact to expand exponentially over the course of their public-spirited careers,” Gerson said.

For the third consecutive year, the Rhodes Scholars class overall was comprised of a majority of minorities, and approximately half are first-generation Americans, the Rhodes Trust said in a release. One is the first transgender woman elected to a Rhodes Scholarship, while two other Scholars-elect are non-binary. 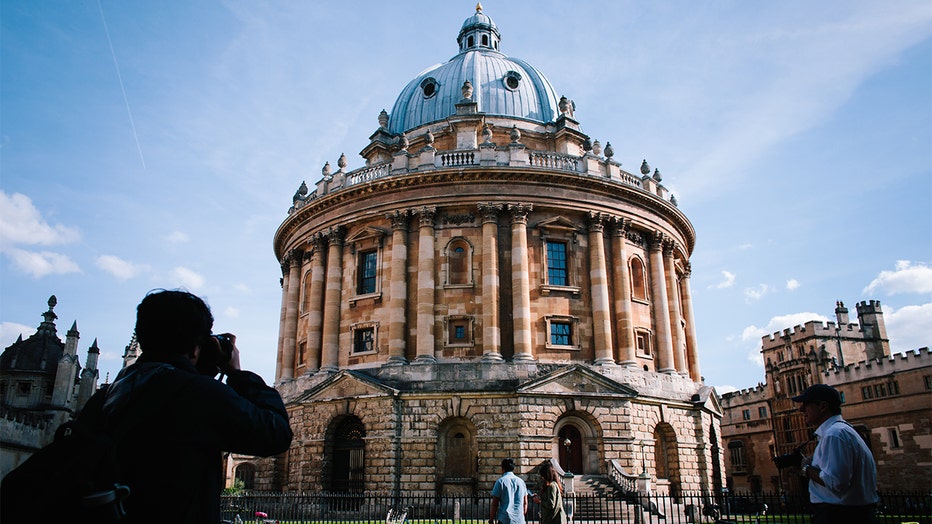 A tourist takes a photograph of the historic Radcliffe Camera library building in Oxford, England, on June 22, 2019. (Photo by David Cliff/NurPhoto via Getty Images)

Rhodes Scholarships provide all expenses for two or three years of study at Oxford University and may allow funding in some instances for four years.

The trust pays all college and university fees, provides a stipend to cover necessary expenses while in residence in Oxford as well as during vacations, and transportation to and from England, according to the release. The total value of the scholarship averages approximately $70,000 per year, and up to as much as approximately $250,000 for Scholars who remain at Oxford for four years in certain departments.

Gerson called the Rhodes Scholarships, "the oldest and best-known award for international study, and arguably the most famous academic award available to American college graduates.“

Rhodes Scholars are chosen in a two-stage process, according to the release. First, applicants must be endorsed by their college or university. This year, more than 2,900 students began the application process, and 963 were endorsed by 298 different colleges and universities. Committees of Selection in each of 16 U.S. districts then invite the strongest applicants to appear before them for interview, the release said.

The Rhodes Trust is a British charity established to honor the will and bequest of Cecil J. Rhodes.

“A Rhodes Scholar should show great promise of leadership. In short, we seek outstanding young people of intellect, character, leadership, and commitment to service,” Gerson said. “These basic characteristics are directed at fulfilling Mr. Rhodes’s hopes that the Rhodes Scholars would make an important and positive contribution throughout the world. In Rhodes’s words, his Scholars should 'esteem the performance of public duties as their highest aim.'"

So far, 3,516 Americans have won Rhodes Scholarships, representing 324 colleges and universities. Since 1976, women have been eligible to apply, and 588 American women have now won the coveted scholarship, the trust said. Approximately 2,000 American Rhodes Scholars are also living in all parts of the U.S. and abroad, according to the trust.

The biographies of the 2020 class of 32 Rhodes Scholars can be read here.