A Valley landscaper is recovering after being badly beaten by an unknown man on Feb. 4. He's hoping to raise money since he's also providing for his family back in Mexico.

AVONDALE, Ariz. - A Valley landscaper was brutally attacked on Feb. 4 while doing his job and now needs help from the public.

The police report first came in as a robbery, but the damage done to 66-year-old Leopoldo Gomez is not only financial. He was left beaten badly.

Nicknamed "Polo," the landscaper works seven days a week if he can. "Me working hard, my job here is trimming trees, cutting grass, everything," he said.

But coworker and friend Scott Shafer says what happened to Gomez at the Rose Terrace Apartments makes him angry.

While doing maintenance work with a leaf blower, the alleged attacker came out of nowhere."He got knocked out," Shafer said.

"Both eyes swollen shut. Blood coming from everywhere," Shafer explained, adding a man in the complex had a problem with Gomez blowing dust near him.

After talking to management, Shafer and his boss came back around to find Gomez on the ground. The man ran off. 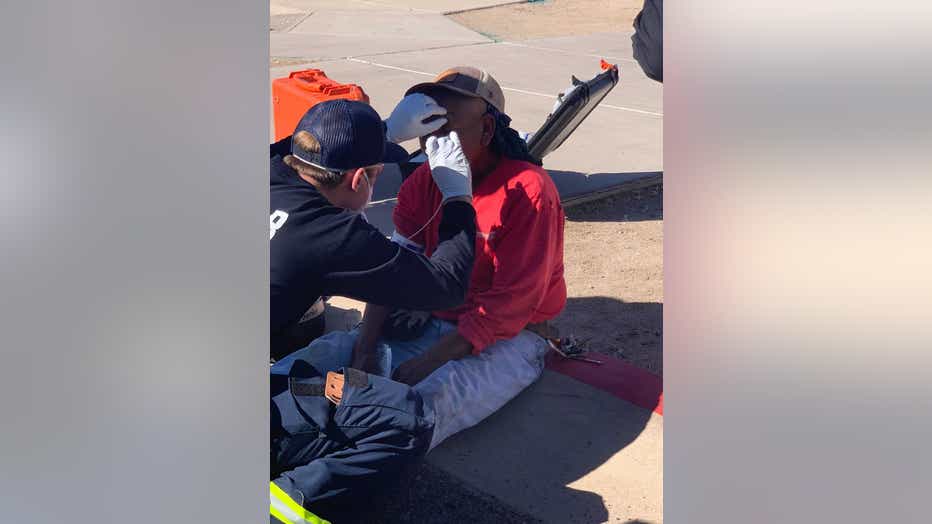 Medics tended to the 66-year-old and he went to the hospital for a brief stay. He's now recovering and is hoping to get back to work soon.

"My teeth, every teeth, is loose," Gomez said.

Shafer describes the suspect as a Hispanic man in his 30s with short hair and tattoos who claimed to live at the apartment complex.

"Come to find out the guy didn't even live there. It's his sister and her family that live there," he said.

Gomez's phone and all the cash he had in his fanny pack was stolen. He doesn't have family in the US and is supporting his loved ones financially in Mexico.

"The guy is the hardest working gentleman I've ever met in my life," Shafer said.

Anyone with information is asked to call Avondale Police at 623-333-7001. If you'd like to donate to Gomez, visit his GoFundMe here https://gofund.me/6a0fa5b4