Former Senate Majority Leader Bob Dole was helped out of his wheelchair to salute the American flag-draped casket of former President George H.W. Bush on Dec. 4, 2018.

WASHINGTON - In 2018, Bob Dole arose from his wheelchair to salute the American flag-draped casket of George H.W. Bush — reaching past decades of a fierce political rivalry to offer a touching final tribute from one World War II veteran to another.

As an aide lifted him from his wheelchair, Dole slowly steadied himself before Bush’s casket in the Capitol Rotunda and saluted his one-time nemesis with his left hand, a necessity after he was hit by a shell fragment in Italy in 1945 and never regained use of his right hand.

The longtime powerful U.S. senator from Kansas was then helped back into his wheelchair where he sat for several moments paying respects to his former colleague.

Dole, who died Sunday at age 98, is remembered as a politician who could be merciless with his rivals. When Bush defeated him in the 1988 New Hampshire Republican primary, Dole famously snapped: "Stop lying about my record," a shocking statement for the time.

But his powerful gesture to a fellow veteran remains a poignant, lasting memory of Dole for many who witnessed it. A reminder that the two were American war heroes first, before the drama of Washington. 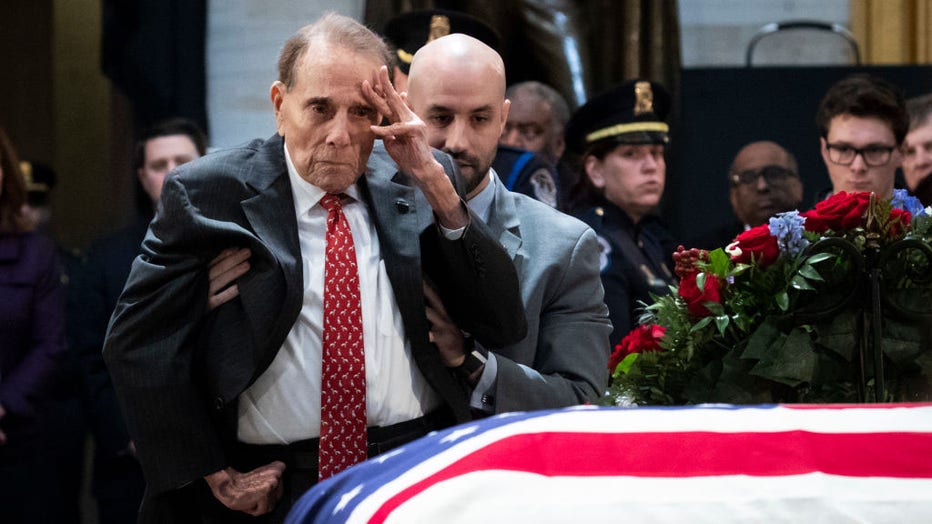 Former Senator Bob Dole stands up and salutes the casket of the late former President George H. W. Bush as he lies in state at the U.S. Capitol, on Dec. 4, 2018, in Washington, D.C. (Photo by Drew Angerer/Getty Images)

Bush was one of the Navy’s youngest pilots in the war at 20 when he was shot down during a 1944 bombing mission. He parachuted into the Pacific Ocean and was rescued by an American submarine.

Dole later opened up about the simple tribute, saying he had sought to pay his respects and "maybe bow my head."

"But I got on my feet — it’s almost like my subconscious was moving my left arm. I didn't go there with the intent to salute, but I did," the 1996 Republican presidential nominee told the Today show in 2019.

Bush and Dole’s rivalry traced as far back as when Bush replaced Dole as chairman of the Republican National Committee in the Richard Nixon era, according to the outlet. The two later battled to become the Republican presidential nominee.

But somewhere along the way, a bond formed between the two.

"You know, George Bush and I were close friends. We also had some rather tough races against one another," Dole recalled. "But he was my friend and he did a great job as president. And so did his son."

Dole, representing Kansas, served four terms in the House and more than four terms in the Senate. He won the Republican nomination in 1996 but was defeated when President Bill Clinton won a second term. He was also a 1976 GOP vice presidential candidate on the losing ticket with President Gerald Ford.

Dole revealed in February that he had been diagnosed with Stage 4 lung cancer and was undergoing treatment. Days later, President Joe Biden visited him at his home to wish him well. The White House said the two were close friends from their days in the Senate.

Biden, who spoke from the Capitol Rotunda on Thursday in front of Dole’s casket, called the late Republican icon "a giant of our history."

"Robert Joseph Dole belongs here in this place, in this temple to liberty and temple to possibilities. Bob Dole loved this Capitol," the Democratic president noted.

"So generous he was," Pelosi added.

RELATED: Biden, leaders gather to pay tribute to Bob Dole at US Capitol