PHOENIX - The influx of people experiencing homelessness in what’s known as "the zone" in downtown Phoenix is putting a strain on resources, and service providers are just trying to keep up with the growing encampment out on the streets.

In part two of "City of a Thousand," we're looking into the layers of challenges leaders are faced with when trying to improve the homeless crisis in Phoenix.

Over the course of several weeks, homeless outreach workers counted more than a thousand unsheltered people camped out on the streets. In the middle of it all is the main hub of resources near 12th Avenue and Madison, the Human Services Campus (HSC).

Leaders at the campus say they’ve been asking for more resources for a long time, and now they’re starting to see improvements, but is it enough?

A 13-acre campus is home to 16 partner organizations to help the homeless. Under the umbrella of HSC, services range from physical and mental health to housing, employment, legal assistance and food.

For people living on the streets, shelter is top of mind.

A new 6,300 square foot tent with air-conditioning, heating, and a hundred beds, recently was unveiled, called "Respiro," meaning respite in Spanish. Although it's an addition to already existing shelter, advocates say it's not enough.

"The next phase is to hire staff, so we can be open during the day in order for those 100 people who sleep here overnight to be able to stay in here during the day or come and go as they need to, to go to appointments to go on job interviews to do whatever they need to do and really have this as their home base," says Amy Schwabenlender, the executive director of HSC.

Outside of Respiro is a mobile restroom unit with five bathrooms for men, and five for women. It also provides 24/7 access to sinks and drinking water.

Lack of affordable housing to transition from shelters

The main goal is finding affordable housing for clients, Schwabenlender says, but that’s a major challenge for housing navigators at HSC.

"It's really emotionally, mentally hard for them to just keep telling people, 'I don't know when you can move into a home,'" Schwabenlender said.

Meanwhile, there are just not enough beds for everyone living in "the zone."

The encampment population is closing in on 1,100, and when you include unhoused people at HSC, a total of nearly 2,000 are living in the area.

"We're under-resourced to the extent we need more funding for more shelter beds. We're hiring just like everybody across the country. We need to hire more people because we're rapidly growing and we're adding a lot more capacity," Glow explained.

CASS is located on the HSC property and is the oldest and largest emergency homeless shelter in the state. It's faced a longtime bed shortage, currently holding 470 beds, and by June 2022, it will have 600 beds.

"30% of all the people we serve in our shelters are over the age of 55. Many of them are in their 60s, 70s, and 80s and this number has been going up across the nation for the last several years," Glow said.

"The silver tsunami" is what she calls it.

CASS plans to open a 170-bed shelter using the old Phoenix Inn near Northern Avenue and I-17, which was bought with federal funding. Project Haven opens by 2023 and will serve people over 55, a potential bridge to permanent housing, but therein lies another issue.

"We're seeing people every day come into homelessness because they can't afford their rent, and they're working, so they sleep in their car, or they have a bed here if we have an opening," Glow said.

Take it from Steve Harrison who says his rent went up about $300. He just couldn’t afford it.

For the last three months, he’s been living out of his Toyota.

The University of Pennsylvania did a 2019 study on the aging homeless population using census data from New York City, Boston and Los Angeles County. Projections suggest that the amount of the nation’s unhoused people older than 65 will nearly triple from 40,000 in 2017 to 106,000 by 2030.

How does Harrison stay safe while sleeping in his car? He says, "You hear gunshots. You don't get up and look." 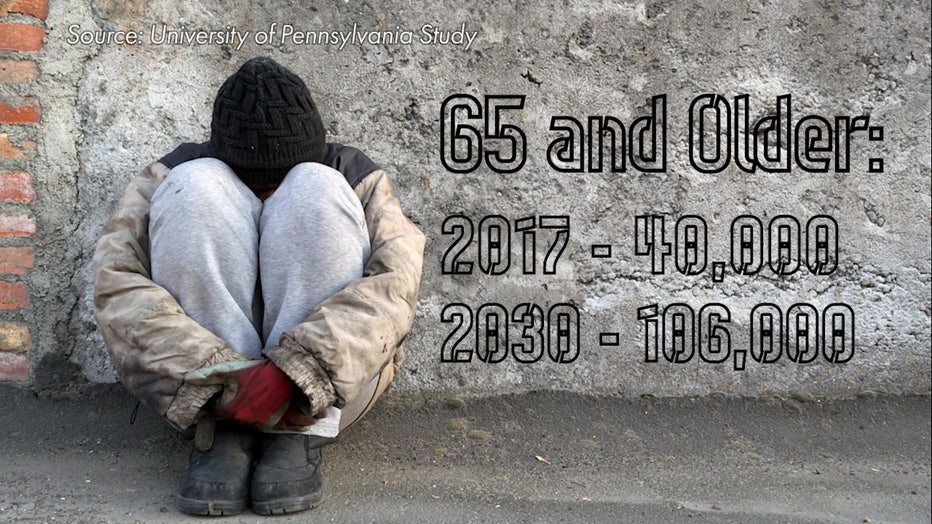 "Encampments are growing every day across the Valley, so if a neighborhood hasn't been impacted, they probably will be in the near future," Glow said.

The city’s Landlord Incentive Program disbursed $500,000 to nearly 600 landlords who accepted housing vouchers from those trying to get off the streets. The Phoenix City Council recently approved increased incentive payments of $2,000 to get more landlords interested.

"There's an inventory of landlords that are willing to house this population," Schwabenlender says, however, "There's not enough of those. There's just not enough."

CASS plans to open a 170-bed shelter using the old Phoenix Inn near Northern Avenue and I-17 for those 55 and older.

How is funding being allocated for services?

Breaking down the city's $50 million investment into homelessness solutions in 2022, the majority of the money, $28 million, goes to shelter services including funding Respiro and the incoming beds for CASS. 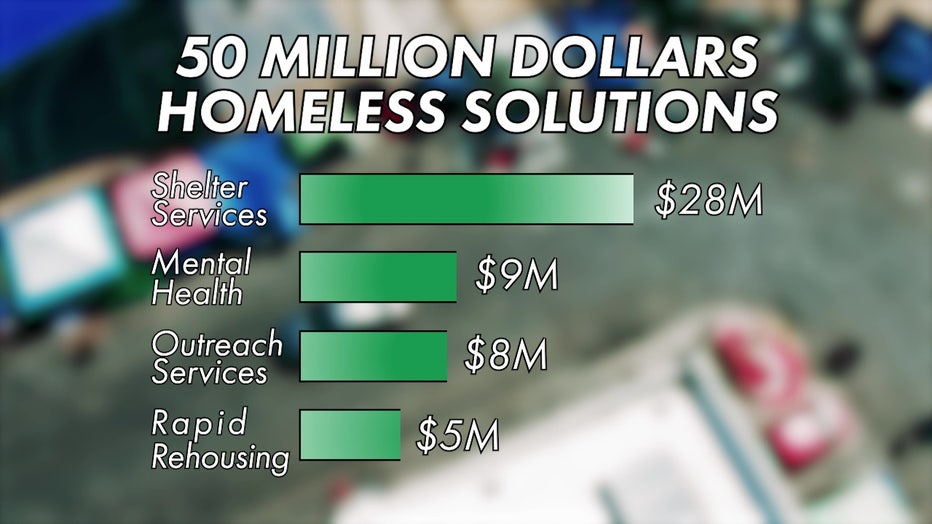 Ultimately, Schwabenlender says the solution to this crisis is housing.

For now, Harrison is saving up enough money for his own place and hopes to get into the city's newest 200-bed shelter opening at 28th and Washington streets.

"I love Phoenix. he said. "I've been here 50 years. Something has to be done. I wish I could talk to Doug Ducey and tell him. He knows what's going on here," Harrison said about Arizona's Governor.

There will be a total of 900 beds available in time for summer between CASS, HSC and Respiro. As for more potential resources, Phoenix has a $76 million surplus, and the Phoenix City Council voted 6-1 on May 17 to approve the 2022-23 budget, setting aside $52 million, and $22 million would be available to address several priorities including homelessness and affordable housing.

In part three of this four-part series, Phoenix City Councilwoman Yassamin Ansari, who represents this part of the community, explains her vision and plans to address homelessness.

'City of a Thousand': Phoenix councilwoman returns to 'the zone,' optimistic about tackling homeless crisis

A Phoenix city councilwoman joined in on a ride through "the zone," a growing homeless encampment downtown, and for Yassamin Ansari, homelessness has been a key issue for her to address since taking office in District 7.