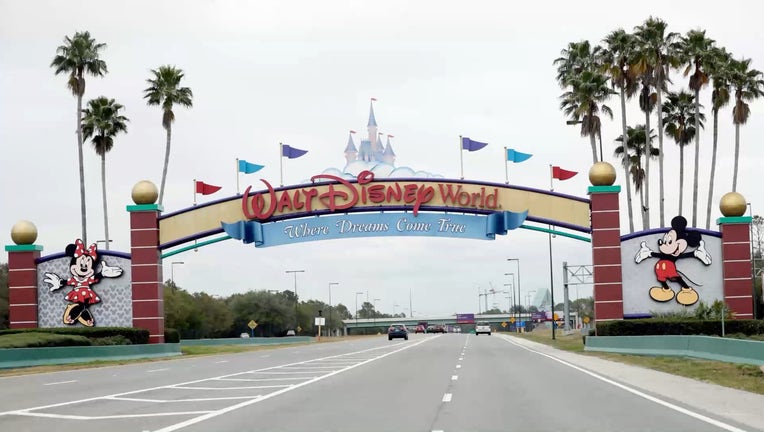 The road to the entrance of Walt Disney World has few cars Monday, March 16, 2020, in Lake Buena Vista, Fla. The Magic Kingdom, Epcot and Hollywood Studios were closed along with other theme parks around the state to help curb the spread of the coron

ORLANDO, Fla. - A maskless man was filmed being escorted out of Disney World this week, but not before he attempted to incite some sort of uprising by paraphrasing a quote from the Disney/Pixar film “A Bug’s Life.”

The incident, which unfolded at Disney’s Hollywood Studios, went down on Tuesday, according to a WDW News Today, a Disney fan site.

In footage taken by Pete Carney, a Disney World podcaster and vlogger who works with WDW News Today, a crowd of security personnel can be seen surrounding the man, who continues to yell back at the other park guests as he’s being walked toward the exit.

Among other statements, the man can be heard yelling, “My God!… Remember the movie that came out at Walt Disney World? It was called ‘A Bug’s Life’! Remember Hopper? He said, ‘If one guy stands up, one ant stands up’!”

As WDW News Today notes, the man was referencing the animated film’s villainous grasshopper character of Hopper, who warned against an uprising of ants, saying at one point, “You let one ant stand up to us, then they all might stand up.”

The man was ejected from the park shortly afterward, according to reports. A representative for the theme park was not immediately available to offer further comment.

Currently, Disney World mandates that all guests over the age of 2, as well as all cast members, wear appropriate face coverings while inside the park. Masks may only be removed when guests are actively eating, and only while stationary and appropriately socially-distanced.