SPOKANE, Wash. - As the novel coronavirus surges amid hasty re-openings in states across the U.S., some state officials have ordered residents to wear masks in public, and one medical expert’s widely-shared Twitter thread demonstrates the effectiveness of wearing a facial covering amid a pandemic that is far from over.

Dr. Richard Davis, who is the clinical microbiology lab director at Providence Sacred Heart Medical Center in Spokane, Washington, tweeted a series of photos that showcased two demonstrations aimed at understanding how effective face masks are at blocking respiratory droplets from an individual’s mouth, while also illustrating the importance of social distancing.

Using a standard triple-layer hospital issue surgical mask, Davis sneezed, sang, talked and coughed toward an agar culture plate with and without a mask. Davis noted in his Twitter thread that he sang Hamilton’s “Dear Theodosia” for the singing portion of the experiment. 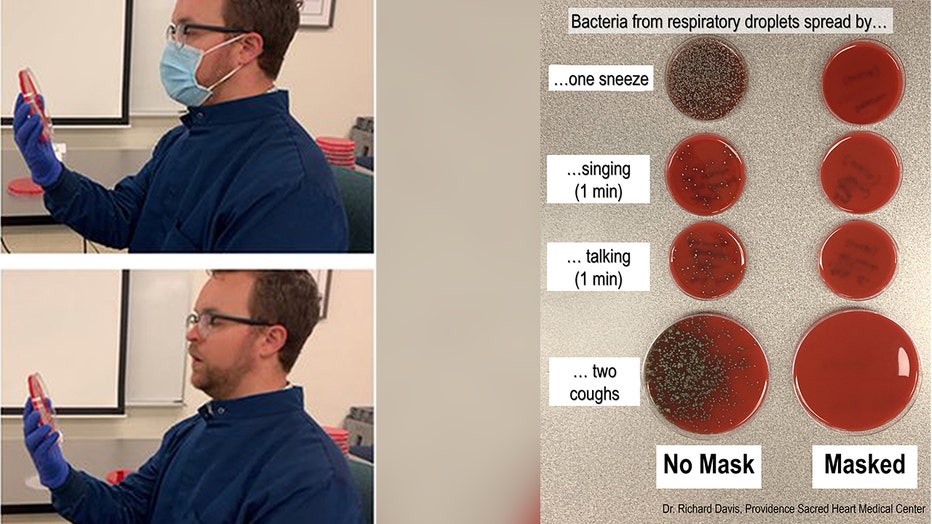 Agar culture plates are Petri dishes filled with agar, a gelatinous substance obtained from red algea to culture, or help multiply, microorganisms. After performing each action, Davis said bacteria colonies formed in the dishes where the respiratory droplets emitted from his mouth landed.

“Bacteria colonies show where droplets landed. A mask blocks virtually all of them,” Davis wrote in a caption for the post.

The images of the experiment showed that every action performed unmasked nearly covered each Petri dish in bacteria, while the dishes used during the masked demonstration were left nearly untouched. Sneezing and coughing left the most noticeable difference on the plates.

In the second demonstration, Davis showed how keeping one’s distance makes a difference in stopping the spread of respiratory droplets.

“I set open bacteria culture plates 2, 4 and 6 feet away and coughed (hard) for ~15s. I repeated this without a mask,” Davis wrote. 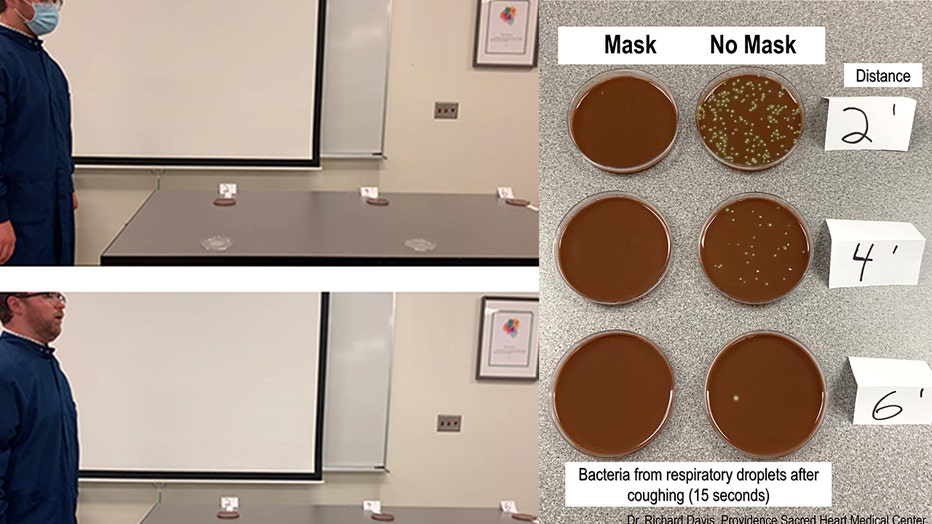 FILE - Photograph of Dr. Rich Davis demonstrating how social distancing with a face mask impacts the spread of respiratory droplets.

The pictures show that standing two feet apart with no mask practically covered the Petri dish with bacteria. Davis’ respiratory droplets also managed to land on the dish at four feet with no mask with scarce amounts still managing to get on the dish from six feet away.

But no matter the distance, the demonstration showed that a mask nearly completely blocked bacteria from landing on the plates.

Davis also noted that besides the actions shows in his demonstration, the simple act of breathing is also a source of spreading respiratory droplets.

“Just breathing (exhaling) does release moisture from your lungs – think of when you breathe out onto a pane of glass,” he said. “Also, during the act of normal breathing, you might clear your throat, laugh, or sigh. Would there be as many droplets, and potential microbes, spread as by coughing and sneezing (common symptoms of respiratory tract infections)? Probably not, but it is possible there could be some.”

Davis said the experiment “was primarily looking at the way a mask can block droplets and secretions from your mouth.”

“Colonies of normal bacteria from my mouth/throat show the spread of large respiratory droplets, like the kind we think mostly spread #COVID19, and how a mask can block them!” Davis wrote on Twitter.

The U.S. Centers for Disease Control and Prevention recommends wearing a cloth face covering while in public to help combat the spread of COVID-19, especially in settings where social distancing measures can be difficult to maintain.

Research shows that the material of your mask matters, and while Davis used a surgical-grade face covering in his demonstration, he said that “any type of material, a hospital grade surgical mask, a homemade cotton mask, even a tissue paper held in front of my mouth, would likely have had the same effect in what these bacteria culture plates looked like.”

RELATED: If you’re going to make your own face mask, the material matters, researchers say

“They would all do something. But would they be equally effective at blocking all droplets or aerosolizations? No,” said Davis.

In New Jersey, Gov. Phil Murphy announced that he’s postponing the restarting of indoor dining because people have not been wearing face masks or complying with recommendations for social distancing.

Democratic governors in Oregon and Kansas said Monday that they would require people to wear masks. Oregon Gov. Kate Brown’s order will require people to wear face coverings in indoor public spaces starting Wednesday. Kansas Gov. Laura Kelly said she will issue an executive order mandating the use of masks in stores and shops, restaurants, and in any situation where social distancing of 6 feet cannot be maintained, including outside. The order goes into effect Friday.

Here’s how small towns across the U.S. are responding to the COVID-19 crisis.

Small towns are finding inventive ways to address the pandemic.

RELATED: Fauci: US could reach 100,000 new coronavirus cases a day 'if this does not turn around'

As the U.S. surpasses 120,000 deaths from the novel coronavirus, wearing a face mask, which many medical experts urge as one of the best lines of defense against the highly contagious virus, has increasingly become politicized.

The pushback on wearing a mask has been repeatedly stoked by President Donald Trump, who has routinely refused to wear any form of facial covering in public, while downplaying the threat of the virus and insisting, contrary to evidence, that “it’s fading away, it’s going to fade away.”

But Davis argues against the politicization of wearing a facial covering.

“I don’t think anyone in health care or public health, or just people who want to be socially conscious in the middle of this pandemic, are happy about the politicization of masks,” he said. “The more everyone can encourage mask use, correct misinformation about mask wearing, and make them available, the better.”

Davis said that for people who complain of discomfort or difficulty breathing while wearing a mask, there are other protective options.

RELATED: Tips for breathing easier while wearing a face mask

“Masks can be uncomfortable, even when you are less accustomed to wearing them,” Davis said. “Just ask health care workers and lab personnel who are wearing masks all day. People with disabilities, or who experience breathing issues or discomfort could consider a clear plastic face shield which can also act as a barrier to droplets, not obscure your face, and may be easier to clean and reuse than a mask.”