Rollover crash on I-10 involving dump truck under investigation

Arizona DPS officials say a dump truck crossed over a median from the eastbound lanes to the westbound lanes and hit a car.

TEMPE, Ariz. - The Department of Public Safety is investigating a rollover crash that involved five vehicles near Interstate 10 and University Drive on July 16.

According to DPS, "A passenger vehicle was traveling east in the far right lane, went left into another lane and struck a large dump truck in the front right side. The impact caused the dump truck to lose control, swerve across all lanes, strike the concrete wall and roll onto its right side. The cab of the truck came loose and came to rest on its roof in the eastbound lanes." 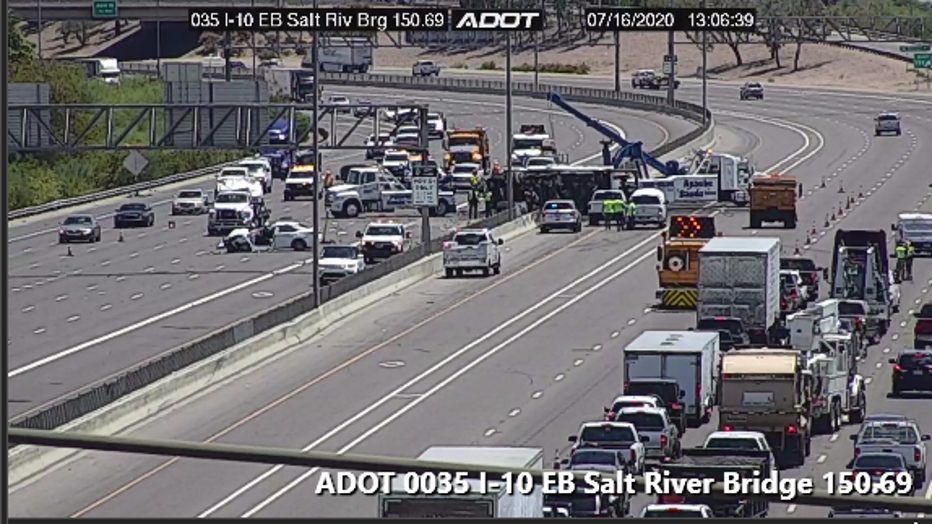 When the dump truck struck the wall, it also hit a third vehicle's front and windshield. Two other vehicles were struck by flying concrete debris.

As a result of the crash, lanes were blocked in both directions of I-10 at Salt River Bridge, slowing traffic.

WATCH: SkyFOX video from the scene

"The driver of that third vehicle was transported to the Maricopa County Medical Center and succumbed to his injuries. The driver of the dump truck was taken to the hospital with serious injuries," stated DPS officials.